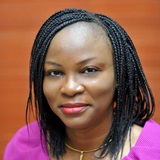 Oluwaseun is a Chevening Fellow working at the British Library on a project tagged ‘Big Data and Libraries’.

The British Library is rich in resources and digital ingenuities that libraries and information professionals have a lot to learn from.

As a Chevening Fellow at the British Library in 2016-17, I was involved in a project called ‘Big Data and Libraries’. During my time at the BL, I conducted a series of interviews with staff from different units of the Library (Digital Scholarship, Services and Content Development STM, Reference Services, Research Development, Higher Education, the Alan Turing Institute, Cataloguing and Digitisation). My interactions revealed that the BL is home to many on-going projects that other libraries and information professionals can learn from. Part of the project therefore focused on creating awareness and learning from the digitisation initiatives at the BL, as well as improving global visibility of otherwise obscure research data, thus increasing access to this data.
My fellowship at the British Library resulted in: