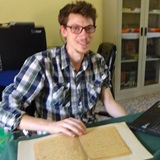 Paul Naylor is an AHRC collaborative PhD student working at the British Library and the University of Birmingham on a thesis called Arabic Sources for West African History.

For a PhD student, this is an unparalleled privilege

My job is to catalogue the Library's Arabic manuscript material from West Africa. Once catalogued, people will be able to find the material much more easily. My hope is that this ease of access will increase interest in the manuscript culture of West Africa among both researchers and the general public.

This project coincided with the British Library’s West Africa Word Symbol Song exhibition. This showcased West Africa’s rich written culture. I was very pleased that several items, like the Saddlebag Qur’an, were selected for the exhibition as a result of my knowledge.

I've worked hard to raise awareness of the British Library's collection to other institutions. In 2014, I presented a paper at the Centre for the Study of Manuscript Cultures (CSMC) in Hamburg. And the following year, I started a five-week placement at the Institut de Recherche en Sciences Humaines in Niamey, Niger, working with staff at the Department of Arabic and Ajami Manuscripts (MARA). I've also written for the Asian and African studies blog.