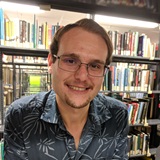 Peter is a PhD candidate with the University of Newcastle (Australia). His field of research is maritime history during the late eighteenth and early nineteenth century. During his PhD research placement at the British Library he composed a bibliography of sources relating to the representation of Captain James Cook in Australia in the nineteenth and twentieth century.

My time at the British Library highlighted the complex and competing ways in which Cook has become central to Australia’s national narrative and identity.

In my three months at the British Library I conducted research into the representations of Captain James Cook in Australia during the nineteenth and twentieth centuries. I focused mainly on newspapers, school text books, film and historical re-enactments to explore the various ways in which Cook’s image has evolved in Australia during this period. My research was then compiled into a bibliography and several blog posts that form part of the upcoming exhibit on Cook’s three circumnavigations.

I began my research by looking into the Library’s modern archives and manuscripts. Here I was able to locate several key texts that helped to shape and promote the image of Captain Cook. I was also able to view many films on Cook that were produced in Australia. I found that early colonial sources portrayed Cook as the enlightened British explorer in order to strengthen links between the young colonies and Britain. However, as time went on and the colonies federated in 1901 into the Commonwealth of Australia, Cook’s image began to take on a more domestic form. In particular Cook was tied to Australian notions of masculinity, race, and industry during the interwar period.

Tragically, the voices of Indigenous peoples throughout Australia were excluded in this predominantly white celebratory narrative. Nonetheless, Indigenous communities maintained their own versions of Cook as the harbinger of dispossession through oral histories. By the 1970s Cook underwent a substantial re-evaluation as the Indigenous perspective entered into the public discourse, concurrent with the move away from ‘White Australia’ and towards multiculturalism.

James Cook continues to be a galvanising figure nearly 250 years since he first set foot on Australia’s east coast. My time at the British Library highlighted the complex and competing ways in which Cook has become central to Australia’s national narrative and identity, and deepened my knowledge on the continued controversy and the consequences of his arrival. It is my hope that the upcoming exhibit and blog posts will provide new understanding as well as fresh insights into this figure.