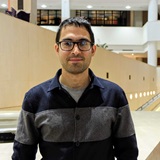 Rahul is the British Library’s second ever Translator in Residence. His residency focuses on education, especially schoolchildren, less widely-used forms of language such as Welsh and English and Scots dialects, and celebrating the translation that already goes on around the Library.

During my year at the Library I’m interested in exploring not only the art of literary translation from one language to another, but also the spaces in between languages, the way languages rub off on one another.

During my year at the Library I’m interested in exploring not only the art of literary translation from one language to another, but also the spaces in between languages, the way languages rub off on one another and the extraordinary diversity that exists within the three languages I work with: Spanish, Portuguese, and perhaps most importantly of all, English.

The British Library is an incredible resource and I aim to write a monthly blog using collection items as a springboard. Topics I’ve covered include English and Scottish dialects, a Portuguese dictionary of Asian words used in that language, and Portunhol, an interlanguage spoken in the border areas of Brazil, Argentina, Paraguay and Uruguay.

I live in Wales, and am enthused by the permanence and cultural importance of the Welsh language, and other non-English but indigenous languages of the UK. Part of my remit here is to organise events with a translation twist, and my main event will be a public discussion between different creative people working in and out of Welsh, Cornish, Scots and Gaelic.

I’m also here to celebrate the amazing work and diverse backgrounds of British Library staff. I've been conducting interviews with the many staff members who translate either as part of their roles at the Library or in their spare time. I plan to organise a network for translators to meet up during lunch breaks to be able to discuss translation regularly.

Reporting from the reading rooms: Brazilian writers and translation

‘Some little language of their own’: English and Scottish dialects, and the desire for a private language