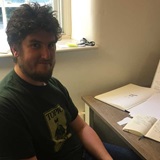 Rob is a PhD candidate with both Bath Spa University's department for digital writing and the University of Bath Human-Computer Interaction department. He is investigating the application of technical, psychological and artistic techniques to the creation of interactive characters.

My thesis is not just one entry in an online repository, it's part of my life which I need to keep going

Rob is using a practice based approach to his PhD research to look at how we generate characters for storytelling, particularly in digital or computational technologies - and how that differs from traditional techniques.

As his PhD is practice based he will produce a small written thesis alongside a main body of practice work. The practice will involve creating a digital simulation of a character and a textual version of that character alongside it. The two versions will interact: reading the textual version to the simulated version will cause the latter change in different ways. Rob plans pull in online data, including geolocational and time data in the character development.

Rob has given careful consideration to the legacy of his PhD multimedia work. An earlier published work, the Black Crown project, was removed suddenly by its publisher and archived – Rob does not know whether the work would still be playable or is now simply a collection of files. And as a writer in residence for the British Library, he has explored the legacy of archives and how information can be warped, tainted or decayed. Although just beginning his PhD, he is already planning the preservation and future access of his multimedia research and practice. At present Rob does not feel his university library has a plan for storing and making accessible his multimedia research. He feels this is mainly due to the demands of rapidly evolving hardware and software options, and the fact that multimedia research outputs are a relatively new issue in the assembly of the PhD thesis.

“I'm not relying on the university to archive it. I think I'm probably better placed to understand what my work needs. It's not just one entry in an online repository, it's part of my life which I need to keep going, I feel.

I do think there's a responsibility, both personal and societal, for artists to preserve their own work and for that to be an on-going job especially with digital technologies because there's this binary element to them. If the software supporting them changes, it's gone forever. It's not like a paper document.

There will be times where you say - okay well it can't be an interactive thing anymore. We do things like snapshot and show them frozen in time. Maybe there needs to be an acceptance by artists and people who create these things, that the very nature of creating something that's contextual to hardware and contextual to software, requires you to be in the moment interacting with it. Perhaps those things are ephemeral and we will lose some things.”

Open access research is fundamental to Rob’s outlook on his work, he feels that multimedia research and creative practice make his PhD more accessible and he wants to translate this into adapting the traditional thesis model.

“I think the thesis, or parts of the PhD, should be enjoyable by lots of people and understandable, accessible. This is not something which is traditionally part of academic discourse. There's a lot of exclusive language and ideas and axioms used. I think it's important to move away from that. I think a lot of people feel like that.”

Rob also sees value in presenting process in the thesis, in the same way as we learn a lot about an artist or artistic practice from looking at a sketchbook as well as a finished piece.

“I think there's this real drive towards polish, not just in academia, in every field where we have this platonic work that's finished at the end. Everyone thinks - oh wow isn't it well considered? Nobody sees all the mistakes but those mistakes are important. And  different theories, trying things out, experimentation, those are really important as well.. You have to draw a line somewhere I guess but more detail is always better if it can be supported, I think.”