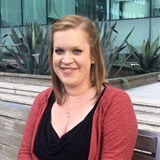 Sally is a Research Associate in the Department of Bioengineering at Imperial College London. For her PhD she developed biosensors to measure human tissue health.

You can spend a long time engineering something to be simple. Yet just by describing it, you make it sound so complicated.

Sally completed her PhD in 2015. Her research involved developing biosensors for measuring metabolites as a means to assess human tissue health. The sensors worked by measuring glucose and lactate levels in tissue to assess whether enough oxygen and glucose were getting into the tissue through the blood. For the main part of her project she worked on monitoring transplant organs, either porcine organs or human organs, which had been donated to science. She also used the sensor system in surgery to monitor patients who were having reconstructive surgery following removal of an oral tumour and she developed a wearable version for use with athletes, particularly cyclists, to monitor metabolism during training.

Sally’s project involved designing and fabricating a 3D printed microfluidic chip and holder, to carry the sensor. This microfluidic device is very simple and efficient to use but difficult to describe in a text-only thesis. If she could have included a video of the device in use, illustrating her text, her research would be easier to understand. If the files were stored with her digital thesis when it is made available in open access repositories such as Imperial's Spiral site or British Library EThOS, the 3D models of the chip and holder could be shared with the wider research community. Future researchers would be able to download and 3D-print the models – allowing them to be studied, modified and used again in future applications building on Sally's research in an effective way.

“In some respects, the thesis is supposed to be a manual that other people can follow - a way of passing on protocols. If there was some way of explaining my research better – perhaps by video, it would definitely help.”