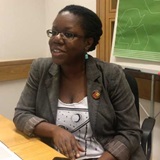 Sam is a PhD candidate at the University of Warwick Centre for Interdisciplinary Methodologies. Her PhD explores how people with coeliac disease and other illnesses use social media to share and visualise their experience of self-care. Her thesis will include two smartphone apps which help younger patients learn about self-care through games-based learning, and older patients visualise chronic symptoms via a photo editing tool.

I wanted my thesis to explore how research could make an impact in the world of chronic illness via technology, combining e-learning, web and application development

In her PhD Sam is exploring how people with coeliac disease share their symptoms and self-management of the disease on social media. She is doing a comparison between the US and the UK, and also looking at how people visualise the complications around self-care. Sam’s research does more than contribute new knowledge to her academic discipline; through the apps she's developed she is helping people within the coeliac community talk about and manage their symptoms.

She is achieving this through analysing the most used hashtags on Twitter and Instagram, and uses co-occurrence hashtag analysis to understand the bigger conversations around symptoms, diagnosis and co-morbid illnesses. She has taken the data and interpreted it into interactive social networks. And she has used some of the results to create two apps as a service for the coeliac and wider chronic illness community.

One of these is the Spoonie Living App. This studies how people can visualise the symptoms of often invisible chronic illnesses like coeliac disease and IBS in a more focused way. Users can add illness-specific stickers to images of themselves or their environment, and then share it across different social networks.

The app has already been used quite widely by people suffering from two or more illnesses including coeliac disease - and has so far had over 1,000 images shared across Instagram, Twitter and Tumblr. Users have dubbed it an “Instagram for the Chronically Sick”, and share their public images via the hashtag #spoonielivingapp. The app can also be used as a research toolkit by other social scientists to study how smaller groups of patients visualise their self-care of specific diseases.

The second app is called Coeliac Sam and is for children. This app teaches children how to find gluten-free food when they are on the move, by looking at food labels and actively avoiding tempting gluten-filled food to achieve maximum coeliac health points. 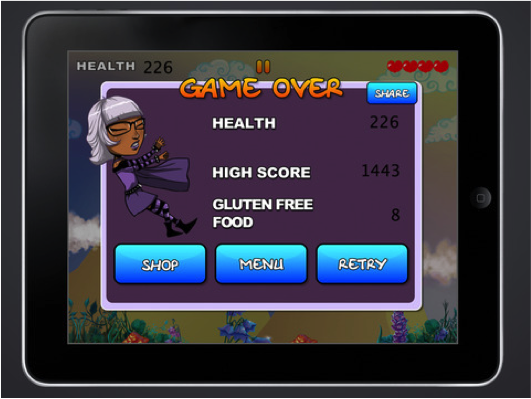 The game’s main character, Coeliac Sam is a superhero of her own coeliac gut, and while she gains high scores for the gluten free food she collects, she also exhibits the painful symptoms and low energy experienced by coeliacs when accidentally eating bad gluten-filled foods. The app has been downloaded 2000 times so far, and Sam has had great feedback. One young game player said “I'm Celiac Sam, too. This makes it fun for me to understand how to manage my illness."  It is hoped that the game can help younger coeliac patients both learn and better engage with their disease through play.

As part of her thesis, Sam has produced data visualisations showing where people are talking about looking for gluten-free food and their symptoms, in New York and London. Sam has taken that data and put it on a 3D map using software called CartoDB sharing her findings on social media and at conferences. She has also developed a huge repository of anonymised images and tweets that she is going through with various emerging software to see if she can find any patterns.

Under current constraints in what her university accepts as the thesis, she foresees the main way her multimedia work can be represented is by screenshots of these visualisations and apps, and links to the app in the app-stores. Any social network analysis files she has created in packages like Gephi, may be linked to in appendixes.

Sam is currently exploring how to save, maintain and archive her Coeliac Sam app and the Spoonie Living app as a research toolkit for future researchers when the PhD project is over. She thinks that academic libraries could help by developing solutions for storing multimedia academic research outputs and making the content accessible to future researchers. This could be by providing access to her app via emulator software - so that future researchers can interact with it using future technologies.