How much fun would a story be if the characters were always good? Explore the role of mischief in storytelling, from medieval to modern-day children’s books.

If you went too near the edge of the chalk pit the ground would give way. Barney had been told this often enough…

This is how Clive King’s Stig of the Dump (1963) begins. It’s an exciting way to start a story, isn’t it? As soon as you read those opening lines, you know that quite soon Barney will go too near the edge of the pit… and that something interesting will happen.

Coraline discovered the door a little while after they moved into the house.

What do you want the next sentence to be when we read this? Do you want it to be: But like a good little girl, she never tried opening the door and just did her homework instead? If you’re like most readers, you don’t want anything so dull! You want Coraline to open the mysterious door and go through it and have adventures, even if it might be dangerous. In fact, especially if it’s dangerous. We love stories where characters do what they shouldn’t, because that’s how stories happen in the first place.

Children’s books featuring naughty behaviour are everywhere. For instance, there’s the mice who vandalise the doll’s house in Beatrix Potter’s The Tale of Two Bad Mice (1902). Or the mischievous William from Richmal Crompton’s hilarious Just William books (first published 1922). How about Dr. Seuss’s The Cat in the Hat (1957), one of the most anarchic picture books ever written? Or The Beano, with its never-ending parade of badly-behaved characters: Dennis the Menace, Minnie the Minx, the Bash Street Kids… John Burningham’s Come Away from the Water, Shirley (1977) taught even very young children that breaking the rules can be way more fun than doing what the grown-ups say.

The Tale of Two Bad Mice by Beatrix Potter 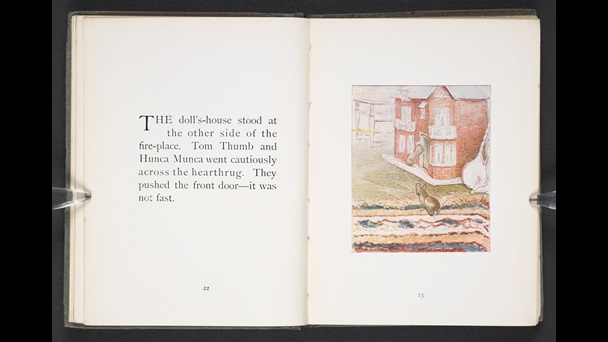 Issues of The Beano, containing the first appearance of the Bash Street Kids 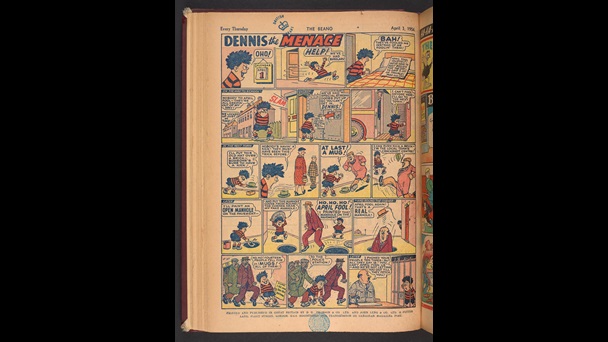 Teaching children how to behave

It wasn’t always this way though. In the past, books for children were often designed not as entertainment, but as ‘instruction manuals’ to encourage their readers to behave well. Back in the 15th century, The Lyttle Childrens Lytil Boke advised children to keep their hands and nails clean; not to eat too quickly; not to pick their ears or nose; and so on. Really, it’s not much more than a list of ‘do’s and ‘don’t’s. Can you imagine wanting to read a book like that? I think most children today would take about three-and-a-half seconds to decide that there was a better way to spend their Saturday afternoon. 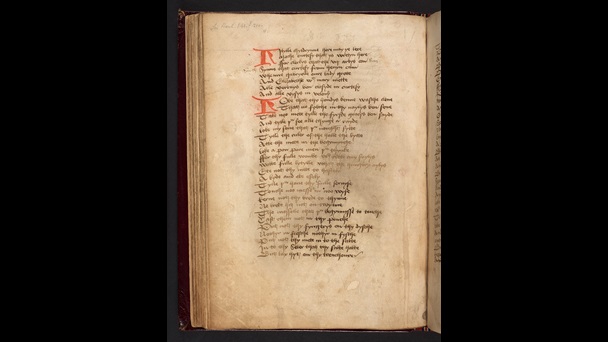 Clearly, children’s books have come a long way since the 15th century. At some point, it seems that authors hit upon a way to make their lessons more engaging for young readers. What was their solution? Story. They went from saying ‘don’t pick your nose’ to ‘hey, look, kids! Here’s a story about a boy who picked his nose!’

And so, by the 18th and 19th centuries, books for children were full of cautionary tales. Funny little stories happening to funny little characters, all of whom come off badly because of their crimes. In Juvenile Trials (1786) children who commit crimes like stealing apples from orchards or ‘raising strife and contention among their school-fellows’ are put on trial by a judge and jury of their friends. If found guilty, they are handed down sentences like confinement to their room for a month, and allowed ‘neither sweet-meats nor fruits’. The History of Jacky Jingle (written around 1830) detailed terrible fates for misbehaving youngsters. Sulky Sue is threatened with the cane ‘to make her good’. Jacky Jingle’s carelessness when making a horse-shoe earns him a face full of hot steam. Ow!

The History of Jacky Jingle 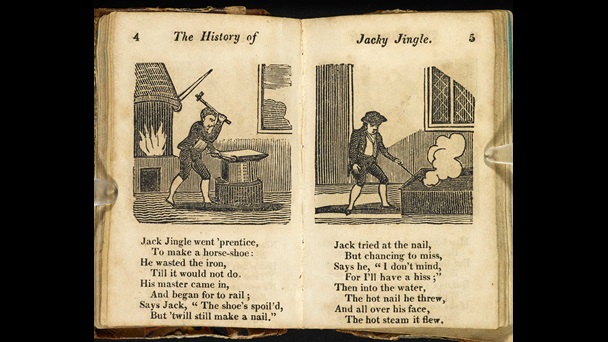 But here’s the problem: stories are fun. They capture the imagination. And they’re full of characters who capture the imagination, too. ‘Jacky Jingle’ and ‘Sulky Sue’ might have been invented to teach readers lessons about good behaviour, but they sound pretty entertaining to me. They almost sound like they could be characters from modern day comics like The Beano (first published 1938) or The Phoenix (launched in 2012). I bet you could write a whole ton of entertaining stories about characters with names like that, and not to teach good manners, either; but for the sheer joy of it.

Issues of The Beano, containing the first appearance of the Bash Street Kids 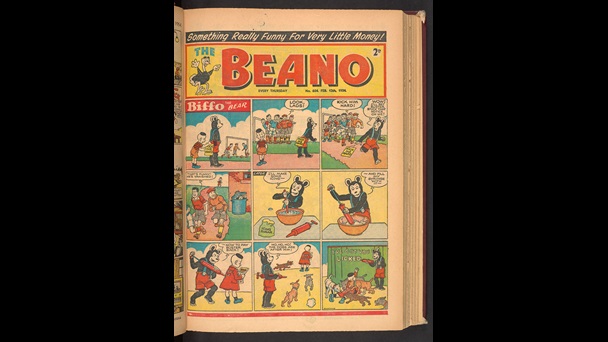 Getting up to mischief

I think this is what happened to the early authors and illustrators of children’s books. They started out trying to teach stern lessons, but that was boring for everyone. So they added the magical ingredient of story to make those lessons more entertaining. But once you add story, it tends to take over. If you look at those 18th and 19th-century books, you can almost sense the naughtiness trying to escape from the page. It’s like opening a Pandora’s box and…

BANG! We explode into the 20th century and beyond, with a whole galaxy of colourful, naughty, wonderful characters who transform children’s books and comics forever. Ivy the Terrible! Horrid Henry! Pippi Longstocking! Bart Simpson! My Naughty Little Sister! Mr and Mrs Twit! Artemis Fowl! The Grinch! And a thousand-and-one others, each naughtier and more entertaining than the last.

Does this mean that children’s books have moved from saying ‘don’t disobey the rules’ to ‘do whatever you like’? I don’t think so for an instant.

Malorie Blackman’s Ellie and the Cat (1991) begins with a spoilt, badly-behaved child – but Ellie is taught a lesson about such behaviour and (after her grandmother turns her into a cat!) comes out as a better, more considerate person. Lyra, the heroine of Philip Pullman’s His Dark Materials series (first book 1995) is rebellious, but she has to be because she is living in an unfair society. Without her disobedience, much greater evils would prevail. The same is true of many of Roald Dahl’s young heroes and heroines. They have to be a little bit naughty in order to defeat terrible opponents – monstrously unfair teachers like Miss Trunchbull, or actual monsters, as in The BFG (1982). Having said that, in the first draft of Roald Dahl’s Matilda the young hero is utterly horrible. In one scene she dips the cat’s paws into paint and chases it round her house; in another she puts itching powder in her classmates’ pants. 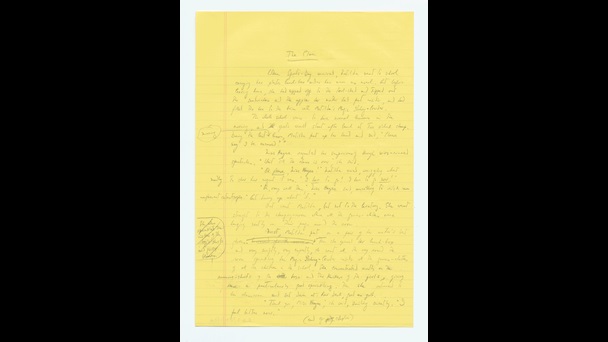 Despite all the mischief and fun, children’s books are for the most part still extremely moral. They are still concerned with good and bad behaviour, but they examine these subjects in a complex way.

What’s really changed since the early days is the idea that naughtiness is the end of the world. Children’s books from hundreds of years ago promised awful punishment for any youngster who dared to step out of line. Nowadays we’re more forgiving. We know that story is a safe place to explore what happens when we act badly. We’re comfortable with the idea that we can have some fun along the way before we get to the ‘lesson’. One evening Max, the young hero of Maurice Sendak’s Where the Wild Things Are (1963), makes mischief, threatens to eat his own mother, and is sent to bed without his supper. From his bedroom he sails to the ‘land where the wild things are’, where a pack of ferocious monsters crown him ‘King of all Wild Things’ and he sends them to bed without their supper. Even if Max returns home to his mother, the book is always going to be read as a celebration of his rebellion. Like Max, we all want to make some noise sometimes; have a few adventures; see what happens when we go a bit nuts.

The difference between modern children’s literature and those older books isn’t that we have lost our sense of ‘good behaviour’ and ‘bad behaviour’. It’s just that we’ve become more comfortable with characters who act out of curiosity, or naughtiness, or silliness. We’ve learned to relax and enjoy the ride a bit more. That bit of the ride where everything gets crazy and exciting and topsy-turvy, before it all becomes too much and we take off the wolf suit and go back home. That bit of the ride where story happens.

Banner image: © Used by kind permission of DC Thomson & Co Ltd and Beano Studios. You may not use the material for commercial purposes. Please credit the copyright holder when reusing this work.

More articles on Behaving and misbehaving