How do you dream up new ideas? ‘I try to think back to when I was a child’. Read on for more writing secrets from poet and author Michael Rosen.

Can books change the world? If so, how?

I think that when we read books, we learn about the world and how people live in the world. We also learn of how things change and how other worlds are possible. This is very powerful. If we read widely and often, I think it does prevent us from being irrationally narrow-minded and aggressive towards people.

How do you dream up new ideas?

I try to think back to when I was a child. This offers me a great reservoir of thoughts and memories. I also listen to people and watch what they do. And sometimes I get ideas as I read other people's stories. I think of something similar or in contrast to what I'm reading.

Can you tell us about your writing process? Do you make mistakes, experiment or make radical changes to early drafts?

I can write almost anywhere unless I’m writing long fiction or non-fiction. Then I need to take myself away to an office I've got in an old factory.

I make hundreds of ‘mistakes’ – really they are just ‘trying something out’. I do make plenty of changes and I listen carefully to what experienced editors tell me. I've had some great editors in the last few years who've got me to cut stuff, change things round, write new scenes, stop repeating myself – and lots more. That's really helpful.

What advice would you give today’s aspiring young poets, storytellers and illustrators?

First and foremost you must, must, must read loads. You really must. Go to see plays, films and watch TV dramas. I would say that a good deal of the time you must stop being like ordinary readers. You must start looking at HOW people write. Look at how stories start, how stories are narrated, how stories get exciting, how some stories fail. Look at how stories let you into the minds of people. How do stories show you 'point of view' – through the narration, the dialogue or both? Look at how stories send you on ‘false trails’ thinking that x was going to happen when really in the end it was y. How did they get you to think that? Also think about what a story seemed to be saying to you in terms of a message or several messages.

Then my other advice is to keep a notebook. You must scribble down ideas and things you hear that you think are interesting. If you can draw, draw the ideas. Think of plot lines, play the game of what-if.

If you would like to write poems, read, read, read loads of poems. Get the sound of them in your ear. Listen out for bits of lines that you like. Ask yourself why you like them? What's good about them? 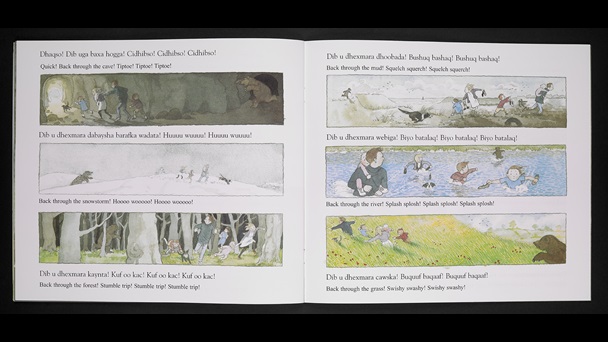 What are your most vivid childhood memories of books and pictures?

My first memory is of a book about a little red train. Then I remember the Beatrix Potter books – Peter Rabbit, Squirrel Nutkin, especially. And then the ‘Père Castor’ books like Frou the Hare, Mischief the Squirrel. These were like the Puffin Picture books but originated in France. After that, I can remember my mother reading me some Canadian books by Ernest Thompson Seton. He was a forest ranger in British Columbia and wrote books from the point of view of the animals. I loved these.

My favourite book at around this time was an English version of the German folk tales about a character called Til Eulenspiegel. The tales were written in the 1500s, but I read the version translated by Lisbeth Gombrich, which was published in 1948. It is a beautiful book and the illustrations are coloured photographs of puppets in mocked-up scenes. This gives a strange stage-like quality to them, but at the same time realistic. I suppose you could call them heightened realism.

My first favourite book was the Till Eulenspiegel book and the next was probably Emil and the Detectives and after that The Wool Pack by Cynthia Harnett.

Did you write poetry and stories when you were a child?

The only story I wrote outside of school was one where I ‘adapted’ (some might say ‘stole’) a story about a cat called Solomon who runs away and looks for somewhere to stay. I retold it and it was published in a newspaper. My parents always thought that I had made it up myself until many years later, when I was an adult and I started to tell people about it. My father heard me tell the story and was really disappointed! I was in my 40s!

What games did you enjoy playing when you were a child?

I liked ‘he’ especially the one you play with a ball. We used to call that ‘Kingy’ or ‘King-he’. You had to throw the ball so it hit someone below the neck, above the waist, not on the arms or legs. If you were hit, then it was your turn. I liked playing cricket in the park or in the alley by our house.

Which writers, films or illustrations have influenced your work?

The first people to spur me into writing were James Joyce, D H Lawrence, Carl Sandburg and Gerard Manley Hopkins. They all in their different ways helped me think that I could write poetry. When I've written fiction – whether that's for picture books, short stories or novels, I think I try to let many kinds of fiction-writers seep into my mind: Erich Kästner, Rosemary Sutcliff and comic writers like James Thurber or comic story-tellers like Peter Ustinov.

What's the most embarrassing thing that's ever happened to you?

I turned up late for a class. Most of the students were rather posh and they thought that I dressed like a tramp. I walked into the class and the teacher turned round and started to tell me about the leak in the ceiling and then stopped himself and said, ‘Oh I thought you were the plumber!’ After that the class kept saying that to me: ‘Oh I thought you were the plumber’. At the time I was embarrassed about it. I was about 19.

What makes you happy?

When Arsenal win. When I'm on holiday with my family.

What makes you sad?

Thinking about how my son died.