One of the most wonderful things about books is their ability to transport us to different worlds, times and places. But why are journeys so important to stories?

When parents are away, you can bet an adventure is going to happen. In some of the most famous children’s classics of all time, an adventure might be found at the bottom of a rabbit hole, across the ocean on a treasure island, or even in an ordinary-looking wardrobe. In J M Barrie’s Peter Pan and Wendy (1911), the dream worlds of the Darling children come true when the boy who never grows up convinces them to fly away to Never Land, a place where pirates, mermaids and fairies live together on an island. What these adventures all have in common is that they begin with a journey, one that only children can take part in. 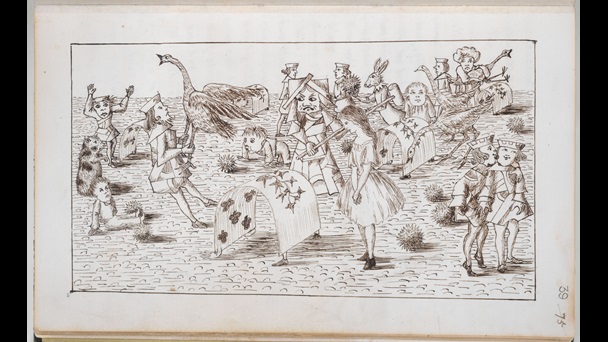 Journeys come in all shapes and sizes. Some books contain journeys so epic that that they take your breath away. In Philip Pullman’s His Dark Materials series (1995–2000), Lyra Belacqua journeys from Oxford to the Arctic and steps into parallel universes, encountering armoured polar bears, witches and other magic along the way. True events, rather than fantasy, inspired the Arctic voyages in Catherine Johnson’s Race to the Frozen North: The Matthew Henson Story (2018). Born in 1866, Matthew Henson was an American explorer and the first man to reach the North Pole. The book is narrated from his perspective, giving a voice to his experiences and achievements which were ignored for many years because of the colour of his skin.

Race to the Frozen North: The Matthew Henson Story by Catherine Johnson, illustrated by Katie Hickey Many adventure stories, like Robert Louis Stevenson’s Treasure Island (1883), are accompanied by maps that chart the journeys inside the book, blurring the lines between fact and fiction. In the case of Stevenson’s tale, the story itself was actually inspired by a map drawn by his stepson, Lloyd Osbourne. Stevenson was so intrigued by the boy’s drawing that he quickly began writing on the spot and finished 15 chapters within a fortnight! 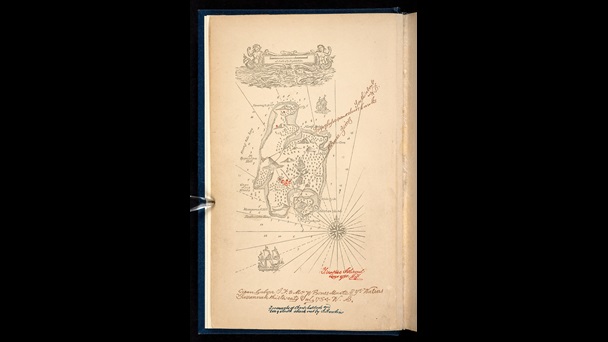 You don’t have to go far to go on a journey, though. In Frances Hodgson Burnett’s classic The Secret Garden (1911), Mary Lennox travels from India to England to live with her uncle, but it’s in the garden of her new home that she finds the most excitement and makes new friends. In Grace Lin’s The Ugly Vegetables (1999), the family garden similarly helps a young girl grow and make friends, learning to accept her Chinese heritage and to be proud of the things that make her different from her American neighbours. Like these other children, Paddington Bear finds plenty of everyday adventures – from taking a bath to travelling on the Underground – following his journey from Peru to London (Michael Bond’s A Bear Called Paddington, 1958). Usage terms © Paddington and Company Limited 2020. Except as otherwise permitted by your national copyright laws this material may not be copied or distributed further.

In Mary Norton’s The Borrowers (1952), it is not the journey that is small but the people themselves, as Arrietty and her family encounter dangers in the world of the ‘human beans’. In The Little Train (1946), written by Graham Greene and first illustrated by Dorothy Craigie, it is the little train who decides to leave Little Snoreing for an adventure to the big city. When the city turns out to be overwhelming, it’s time for the little train to head back home! Smallness also plays a role in Julia Donaldson’s bestselling picture book The Gruffalo (1999), in which the little mouse successfully navigates the woods by inventing a scary monster who turns out to be real.

The Borrowers series: sketches, notes and drawings by Diana Stanley 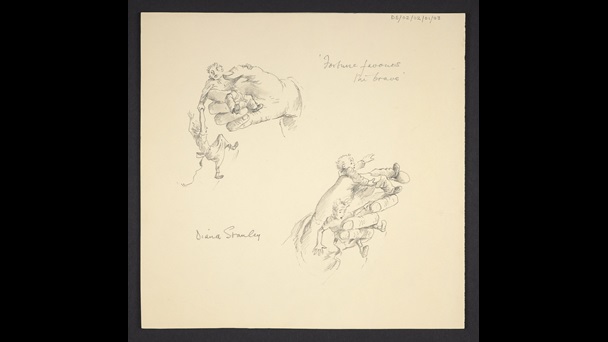 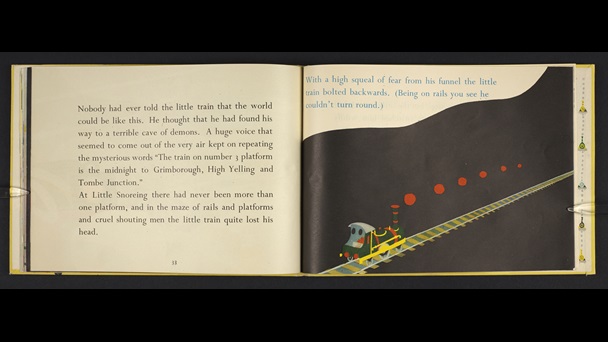 Usage terms Text copyright © Graham Greene. Except as otherwise permitted by your national copyright laws this material may not be copied or distributed further.

What kinds of journeys have you gone on? Try to draw a map of your journey and share it with a friend.

Your imagination is a great way to go on a journey. In Ranjit Singh’s Nimesh the Adventurer (2018), illustrated by Mehrdokht Amini, Nimesh uses his imagination to transform his regular journey home from school into an action-packed adventure. His classroom is an ancient cave where he must sneak past a sleeping dragon, and his school corridor becomes the bottom of the ocean full of sharks. Some books even encourage us to take part and play at going on a journey. Over 200 years ago, Samuel and Joseph Fuller created 18th-century versions of activity books with Little Fanny and Little Henry. The series included hand-coloured paper doll’s heads for children to cut out and piece together as the characters set out on their travels, along with moral tales to encourage good behaviour.

Nimesh the Adventurer by Ranjit Singh, illustrated by Mehrdokht Amini Usage terms Text © Ranjit Singh, 2018
Illustration © Mehrdokht Amini, 2018
Lantana Publishing, 2018 https://lantanapublishing.com/
You may not use the material for commercial purposes. Please credit the copyright holder when reusing this work.

The History and Adventures of Little Henry, a paper doll book 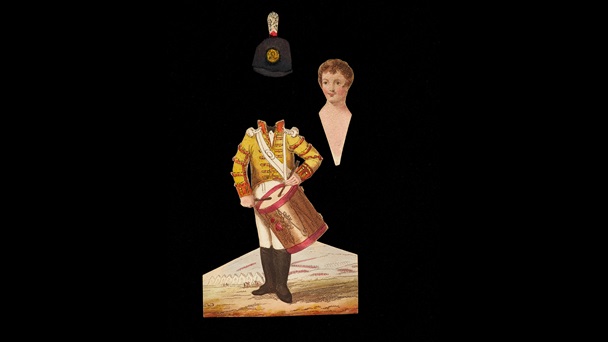 Do you enjoy pretending you are on a journey? When you go on a journey, where do you like to go?

Our imagination can also help us to deal with difficult situations. In C S Lewis’s The Lion, the Witch and the Wardrobe (1950), the Pevensie children discover another world after they are evacuated into the countryside during World War Two to keep them safe from the London bombings. Jimmy Liao’s Starry Starry Night (2009) depicts a young girl and her best friend escaping from the city after the little girl’s grandfather dies. She uses her imagination throughout the text to work through a difficult situation – a bully becomes an evil red dragon – and when she wants to visit her grandfather’s home to say goodbye the bus can suddenly fly as if by magic.

Journeys in children’s literature have often followed a common structure. Children must first leave home in order to grow and develop, and only once they have gained the knowledge they need can they return home once again.[1] This structure works well in children’s classics such as Alice’s Adventures in Wonderland (1865), Peter and Wendy (1911) and Winnie-the-Pooh (1926), but it doesn’t fit for children who don’t necessarily have a home, or a safe home, to return to. In these examples, authors create different structures for the children’s journeys and show how imagination helps them. In Beverley Naidoo’s award-winning book The Other Side of Truth (2000), Sade and Femi are Nigerian child refugees who use their imagination in a more serious way, bending the truth to protect themselves and their father from deportation. Through the many cruel adults they encounter, they learn hard lessons about the ‘truth’ of the world. In Judith Kerr’s semi-autobiographical When Hitler Stole Pink Rabbit (1971), a young Judith Kerr imagines how Hitler has taken her favourite toy and uses this imaginative scenario to help her cope with her flight from Nazi Germany. Usage terms © By Judith Kerr. Finished illustrations copyright © Kerr-Kneale Productions Ltd 1971. You may not use this work for commercial purposes. Please credit the copyright holder when reusing this work.

Imagination is one way to see a journey come to life. But there have been many different ways that authors have worked with illustrators to make journeys more real for their young readers. Could you imagine Michael Rosen’s We’re Going on a Bear Hunt (1989) without the pictures? There would be pages that would just say ‘Squishy squashy, squishy squashy’ without showing you the movement of the grass. At the end of the book, the switch to brilliant hues of colour help you to feel the emotions that the family feels when they finish their journey. In Qin Wenjun’s I Am Hua Mulan (2017), illustrator Yu Rong employs her unique technique of traditional Chinese papercutting with pencil sketches to capture the mood of the story.

I am Hua Mulan (Wo shi Hua Mulan) by Qin Wenjun, illustrated by Yu Rong Usage terms 2017 text copyright © Qin Wenjun, illustration copyright © Yu Rong. First published in China by China Children's Press and Publication Group. All rights reserved. You may not use the material for commercial purposes. Please credit the copyright holder when reusing this work.

The aim of the author-illustrator duo was to reinvent this beloved tale for Chinese readers and make it accessible to an international audience as well. The book contains a dual narrative that combines the life of a modern Chinese girl with that of the traditional female heroine Mulan. Yu Rong, who describes her illustrations as having a humorous side that is inspired by British illustrator Quentin Blake, is in good company. Quentin Blake’s illustrations of Roald Dahl’s stories have long helped propel children (and adults!) into magical worlds, including those of a quirky chocolate maker and a little girl with magical powers. 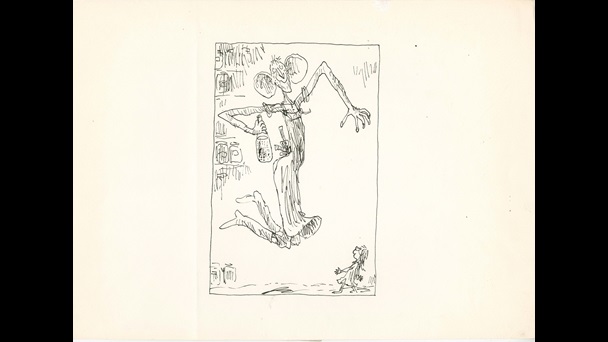 In Shaun Tan’s The Arrival (2006), a father leaves home in search of a better life for his family. As he struggles to make a new start, he meets other immigrants who have left their home for many reasons, including war. Told through the eyes of multiple immigrants to a fictional world, this wordless picture book uses vivid illustrations that convey their fear and hope as they travel for miles and miles to a new and unfamiliar place, and helps to cultivate empathy in its readers as we realise the common humanity that we all share.

Each of these books transports us somewhere else while we stay put, reading them at home, on the bus or in the library. Journeys don’t have to be expensive and that’s part of what makes children’s literature so special. Books are an easy way to travel to different times, places and even to fantastic worlds that are shaped by imagination. So the next time you step out your door, think about what adventures your new day will bring as you slip on your shoes. Because, as a ‘silly old bear’ once said, once you put on your ‘Big Boots’ your adventure has already begun.

More articles on Home and belonging