The characters that we meet in children's books shape the way that we see ourselves and our community around us. Take a look at the history of Black British representation.

When the first books for children appeared in Britain, the country was involved in the transatlantic slave trade. Europeans enslaved people from Africa, taking them to the Caribbean and Americas where they were forced to work in terrible conditions, without pay or other rights.

During the late 18th and early 19th centuries, many people, including children, protested the use of slavery in Britain’s Caribbean colonies. Because most people could not vote in Britain, they had to use other ways to get the attention of politicians.

Did you know that until 1918, you had to be a man and own property in order to vote?


Some Black Britons, like Olaudah Equiano, wrote about their early lives in slavery in order to change people’s minds about the slave trade. Many white British women participated in boycotts of products made by enslaved people, such as tobacco, cotton and sugar. Because British children also consumed sugar, some writers created poems and stories to encourage them to give up this foodstuff.

Amelia Opie’s poem, ‘The Black Man’s Lament; or, How to Make Sugar’ (1826) opens by asking child readers to help end slavery. Opie, a white woman, was a Quaker. Quakers believed that no person should be enslaved by another.

Have you ever participated in a boycott or protest?

Another white British writer, Anna Laetitia Barbauld, believed children should be taught to reason, or argue, about slavery rather than just pity enslaved people. She wrote a dialogue between a ‘Master and Slave’ for children (Evenings at Home, 1792–96), where the enslaved man explains to a slave owner why all people should be free.

Do you try to win arguments using logical reasoning or emotion?

Both Amelia Opie and Anna Laetitia Barbauld wrote on behalf of Black people, imagining what they might say. Most Black writers in Britain at the time, like Olaudah Equiano, wrote for adults instead of children. White writers arguing for the freedom of Black enslaved people also used racial stereotypes.

In the late 19th century, Black British people sometimes worked as entertainers, called minstrels, in seaside towns, playing music and singing comic songs for audiences of mostly white adults and children. Some minstrel shows featured white people using ‘blackface’, a form of make-up and dress to represent an offensive caricature of a Black person. Walter Crane, one of the most important illustrators of the time, depicts one of Old King Cole’s fiddlers as a minstrel in typical costume in his Alphabet of Old Friends (1884).

Both Helen Bannerman’s Little Black Sambo (1901) and the golliwog character in Florence Upton’s The Adventures of Two Dutch Dolls and a Golliwogg (1895) were drawn with caricatured, or exaggerated, features and wore clothing similar to the seaside minstrel. Like the minstrel, these characters had comic roles. Both became symbols of racism in the 20th century because they were used to make fun of Black people and were built around damaging stereotypes.

However, it is possible to tell humorous stories without treating Black people as the object of laughter. By copying down stories from Black Jamaican storytellers, Walter Jekyll’s Jamaican Song and Story (1907) introduced British readers to the trickster figure Anansi, whose humorous adventures have entertained British children ever since.

Did you know that Walter Jekyll was the tutor for Jamaican poet Claude McKay, who went on to become part of the Harlem Renaissance, a group of Black artists, writers and composers based in the Harlem area of New York City in the 1920s?

Trish Cooke, born in Bradford, and Louise Bennett and James Berry, both born in Jamaica, have all retold Anansi stories for British child readers and listeners from their own family traditions (How Anansi Got His Stories by Trish Cooke, illustrated by Anna Violet, 2014; Anancy and Miss Lou by Louise Bennett, 1979; Anancy-Spiderman by James Berry, illustrated by Joseph Olubo, 1988).

What stories do your family tell? 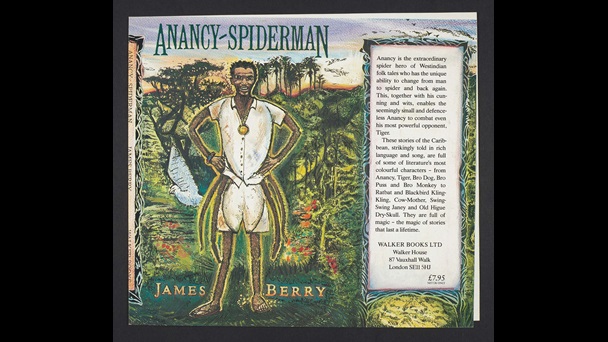 Usage terms Text and illustration © Estate of James Berry. Book cover design © Estate of Joseph Olubo. You may not use the material for commercial purposes. Please credit the copyright holder when reusing this work.

The winds of change: new stories about being Black and British

Following World War Two, many people who had lived in Britain’s colonies, including people from the Caribbean, India and Africa, came to Britain to find work and a good education for their children. These new communities realised that books for children often ignored people of colour or failed to represent them in a positive way. Many started writing books for children to make the changes they wanted to see. Writers like Petronella Breinburg, Andrew Salkey and Beryl Gilroy produced stories about growing up Black and British. 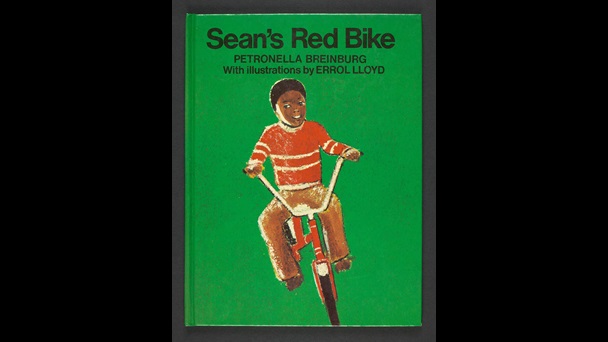 Usage terms Text © Estate of Petronella Breinburg. Illustrations © Errol Lloyd. You may not use this work for commercial purposes. Please credit the copyright holder when reusing this work.

Did you know that the first Black illustrator to be nominated for a Kate Greenaway medal was Errol Lloyd in 1973, for his pictures in Petronella Breinburg’s My Brother Sean?

These writers and artists are part of what is called the Windrush Generation, migrants from the Caribbean who came to Britain after 1948, mainly on ships such as the Empire Windrush. Their books are important because they are some of the first to show Black children as central to the narrative in a positive and inclusive way.

Nini at Carnival by Errol Lloyd 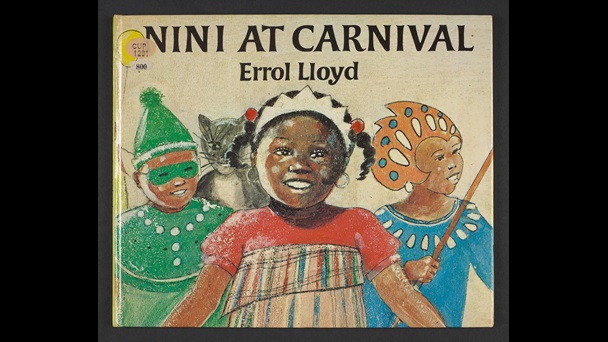 Usage terms © Errol Lloyd. You may not use this work for commercial purposes. Please credit the copyright holder when reusing this work.

What parts of the world feature in your family tree?

Over 30 years ago, in 1987, author and publisher Verna Wilkins founded Tamarind Books. She was concerned that so few children’s books included Black and minority ethnic characters, and about the effect that this had on children. Her independent publishing house focused on challenging this imbalance, producing quality inclusive literature that featured Black, Asian and minority ethnic children and children with disabilities. (Tamarind Books later became an imprint of Random House Children’s Books and in 2016 Wilkins came out of retirement to found Firetree Books.) Her books range from stories that show children enjoying everyday experiences through to biographies of iconic and important Black public figures. Her moving and sensitive biography of the late Stephen Lawrence (The Life of Stephen Lawrence, 2001) celebrates the life of this young man, while also shedding light on the injustice and tragic circumstances that led to his death.

Whose life story would you be interested in reading about?

In the spirit of Verna Wilkins’ work, and with ongoing concerns about under-representation, several independent publishers have emerged in the UK. They are rising to the challenge to create inclusive books that show a range of stories, characters and experiences. These include (but are not limited to) Alanna Max, Child’s Play, Knights Of, Lantana and Tiny Owl.

Anna McQuinn worked as an editor for Verna Wilkins before founding Alanna books (now Alanna Max, a new partnership with Ken Wilson-Max). Both her Lulu and Zeki picture book series’ illustrate the everyday lives of young Black characters of baby or toddler age. They take trips to the library, doctor and swimming pool. Alanna Max is driven by the desire to produce inclusive literature that centres Black characters, making it a normal and mainstream experience for all readers. As Anna McQuinn puts it, her books and characters ‘show the world as it really is’.

In Zeki Can Swim (2017), Zeki drives the narrative and takes the reader along for a trip to the local swimming pool. The illustrations capture special, joyful moments between parents and their children, as well as the playful energy of Zeki’s friends in the pool. Like his sister Lulu, Zeki’s everyday exploits are tremendously important because they provide a platform for both Zeki and Lulu – and their readers – to explore life as babies and toddlers.

Zeki Can Swim! by Anna McQuinn, illustrated by Ruth Hearson 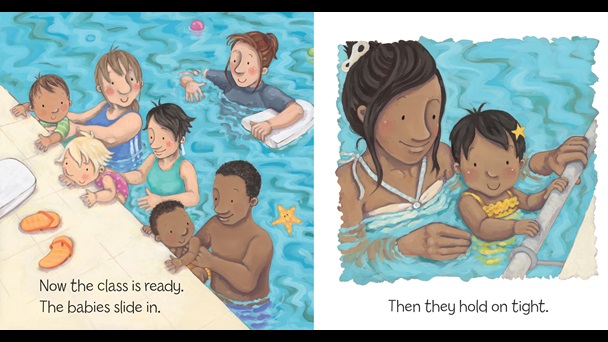 Usage terms © 2016 Images from Zeki Can Swim, illustrated by Ruth Hearson, written by Anna McQuinn, published by Alanna Max. You may not use the material for commercial purposes. Please credit the copyright holder when reusing this work.

Family and belonging is at the centre of the picture book So Much (1994), written by Trish Cooke and illustrated by Helen Oxenbury. So Much is a playful and joyous celebration of families coming together, a showcase for the powerful bonds of family relationships and community. Every page exudes warmth, love and heart. First published in the ‘90s, the book has since gone on to become a contemporary classic.

So Much by Trish Cooke, illustrated by Helen Oxenbury 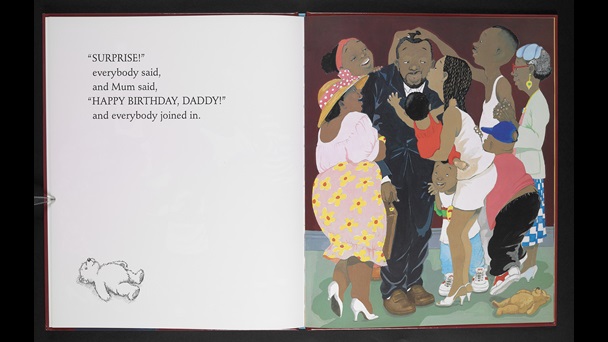 Who are the special people in your life that you would include in your own book?

Books also offer a space to dream, go on adventures or imagine worlds beyond our own. Nathan Bryon's and Dapo Adeola’s debut picture book Look Up (2019) invites the reader to do just that. This thoughtfully and beautifully illustrated story is told from the perspective of a science-loving young girl named Rocket, who dreams about being an astronaut. Inspired by role model Mae Jemison, the first African-American woman in space, Rocket serves as a role model in her own right by being central to the narrative, enjoying life and chasing her astrological dreams.

Look up! by Nathan Bryon and Dapo Adeola: digital artworks 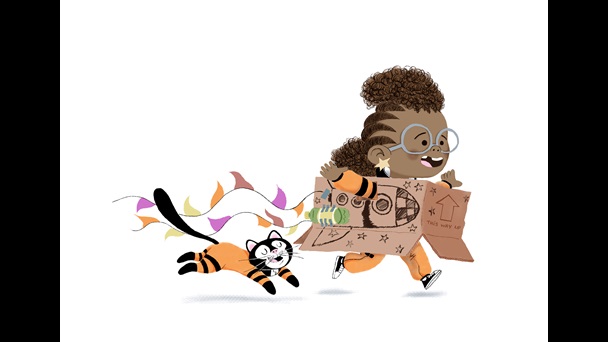 Usage terms Illustrations © Dapo Adeola 2019. Look Up! is co-created by Nathan Bryon and Dapo Adeola. Except as otherwise permitted by your national copyright laws this material may not be copied or distributed further.

Children’s books are powerful: they shape how we see ourselves and others around us, as well as how we relate to the wider world. They can be a vehicle to tell stories about the range of British communities that exist today, and in the past. The books we’ve shown you today are just a small part of one of those many stories.

Whose stories do we still need to tell?

For adults: Find out more

To read more about representation and inclusive children’s books, explore the list below.

Chetty, Darren and Karen Sands-O’Connor, ‘Beyond the Secret Garden’. Regular column on children’s books and diversity for Books for Keeps, beginning January 2018 <http://booksforkeeps.co.uk/>

Banner image: © Estate of Petronella Breinburg. Illustrations © Errol Lloyd. You may not use this work for commercial purposes. Please credit the copyright holder when reusing this work.

More articles on Home and belonging