From miniature people, to towering giants, playing with size and scale add a fun dimension to children’s books!

Have you ever wondered why humans are the size they are? Why aren’t you as small as a mouse or as gigantic as a whale? And what would happen if you changed shape, shrinking to a tiny speck, or shooting up to become a giant?

The scale of people has been a source of fascination for storytellers since the very first children’s tales were shared, and the first books written for them. From stories about tiny Tom Thumb and other ‘thumblings’, originally told centuries ago, to the more recent adventures of Roald Dahl’s dream-weaving Big Friendly Giant, these stories burst with magic and wonder, invite readers to re-evaluate the real world and its inhabitants – and usually make us laugh (or shudder) along the way. 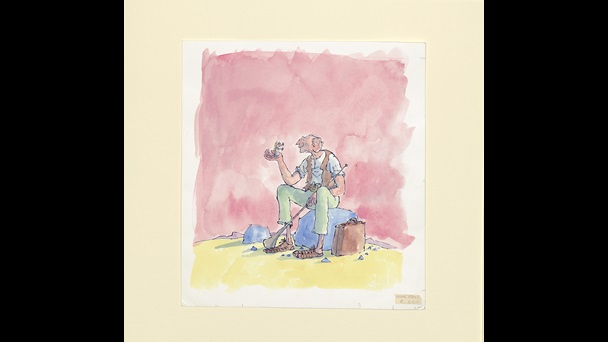 In 1740, publisher Thomas Boreman helped spark a revolution in children’s book publishing when he released a tiny book, just 6.5cm high, jokingly called The Gigantick History of the Two Famous Giants, and Other Curiosities in Guildhall, London. Before then, children tended to read the same stories as adults, or if they had their own, then they were religious or educational. With his Gigantick History – the first in what became a series of entertaining guidebooks to London landmarks – Boreman decided books for young readers should look and feel different to adult books and set out to make enchanting objects small enough to fit in the palm of a child’s hand. Nobody knows Boreman's exact reasons, perhaps he felt that small hands should hold small books.

Curiosities in the Tower of London Other tiny books from history suggest that children may instinctively scale down the adult world – and that this may be a natural part of children’s play. For example, the very first work that author Charlotte Brontë created was a miniature book containing a short story written for her baby sister Anne. Written and stitched together when Charlotte was just 12 years old, it was one of a series of tiny handmade books made by the Brontë children. The later books were made for and about their toy soldiers. The siblings’ little volumes contained stories, illustrations, maps, advertisements and articles – mimicking the material produced by grown-up publishers. Charlotte was just a child herself when she produced this beautiful work and therefore obviously not driven by commercial ideas of what might sell as those early publishers may have been. 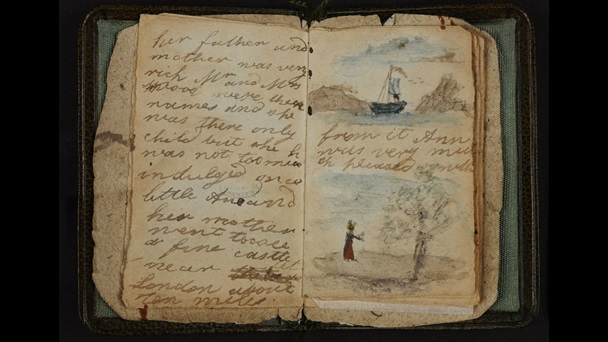 Perhaps Boreman and his contemporaries were tapping into this existing culture. Whatever the motivation, their tiny books really took off. Within decades publishers had become even more creative, releasing whole series contained in little dollhouse-style bookshelves, crossing the boundary between books and toys. 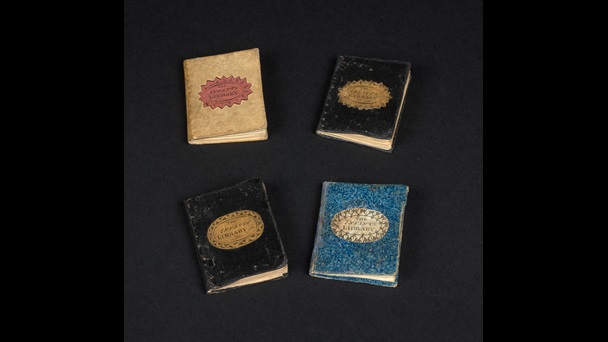 Usage terms Royal Collection Trust / © Her Majesty Queen Elizabeth II 2019 www.rct.uk/collection/themes/trails/queen-marys-dolls-house Except as otherwise permitted by your national copyright laws this material may not be copied or distributed further.

In that first volume, Boreman set out his belief that children’s minds need to be ‘amused’ by books in order to give their full attention during ‘the infant age’. His own visual joke – calling such a tiny book gigantic – made his young readers laugh even before the first page. And so he helped establish a tone for so many of the human scale-themed books that followed: whether it's Mr Small of the popular Mr Men series eating a ridiculous lunch of half a pea, one crumb and a drop of lemonade, or Alice almost drowning in a sea of her own tears in Wonderland, silliness concerning size abounds in children’s literature. The challenge of scale

Quite how to depict such exceptional body sizes has proved an enduring challenge for illustrators. In Tommy Thumb’s Pretty Song-Book (1744), a tiny book containing the earliest surviving collection of English nursery rhymes, one of the illustrations depicts a snail that’s larger than the head of the lady nearby. In the volume of Boreman’s Gigantick History about the zoo at the Tower of London, the porcupine is comically bigger than the ferocious lion. Absurd, unrealistic scale within the illustrations of these early children’s books seems to be one more aspect designed to amuse. Curiosities in the Tower of London 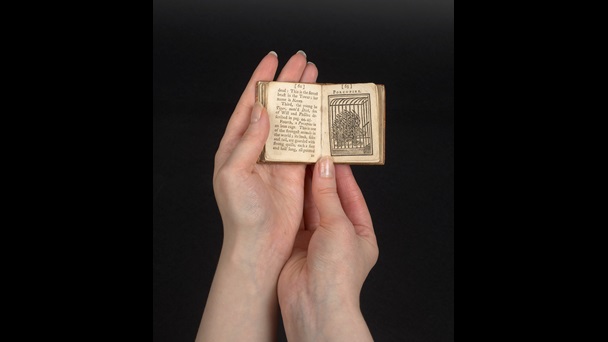 Others want the scale just right. On one draft sketch for Julia Donaldson’s The Smartest Giant in Town (2002), Axel Scheffler writes a note to his publisher: ‘Giant a little too small’. What’s the problem, you might think, looking at the sketch, the giant’s still bigger than all the houses? But Scheffler is thinking about his readers and how he must help them believe in the world of his book, and it’s internal logic.

The Smartest Giant in Town by Julia Donaldson, illustrated by Axel Scheffler: original artworks with notes Usage terms Artworks for The Smartest Giant in Town © 2002 Axel Scheffler. Story text by Julia Donaldson. Except as otherwise permitted by your national copyright laws this material may not be copied or distributed further.

Many illustrators solve the problem of scale by having their characters appear next to everyday small objects to highlight their size. Diana Stanley’s front cover for The Borrowers Afloat (1959) shows Mary Norton’s little characters using a teapot as a boat, each figure no bigger than one of the yellow flowers they drift past. In another sketch, she shows the Borrowers in the hands of the Big People, and elsewhere they are scaling a lamp as if it were a mountain.

The Borrowers series: sketches, notes and drawings by Diana Stanley In Mr Small (1972) Roger Hargreaves really emphasises his hero’s littleness by having him alongside a tiny object – whether it’s a pin, worm or matchstick – in almost every single drawing. Mr Tickle (1971) was the first book in the Mr Men series, inspired by Roger’s young son Adam asking him what a tickle looked like. Mr Small was the twelfth book, and the first to focus on a character’s size. This little character seems to have spurred Hargreaves on to push the boundaries of his, by then, well-established series. Within the tale, Mr Small is unable to succeed at any job because of his size (working at a sweet shop he falls in all the lolly jars, at the match factory he gets trapped in all the boxes). Eventually he is advised to meet a children’s author who could make a story of his life. Mr Small thinks nobody will enjoy it but the author reassures him saying, ‘Yes they will. They’ll like it very much!’ And here Hargreaves seems to jump out of the little book to address the reader directly: ‘And you did. Didn’t you?’

If you grow up are you a grown up?

Somehow, children’s books have always seemed exactly the right place to discuss questions of size, and whether how big you are matters. In Alice’s Adventures Under Ground, the manuscript that formed the basis for Alice’s Adventures in Wonderland (1865), Lewis Carroll uses the edges of his pages creatively to help represent Alice’s wildly varying sizes after the potions she sips make her stretch and shrink. In one drawing she’s squashed within the frame of a page, almost like a baby in the womb, in another her head scrapes the top. Physically altered she wonders whether she is still fundamentally the same person: ‘If I’m not the same, who in the world am I?’ Children are always growing and changing, bulging out of their school shoes before term has finished, chalking up their heights on the kitchen wall until one day they tower over the person who gave them life. This may explain why big and small characters, and the phenomenon of physical growth, are such familiar motifs in children’s writing. Perhaps part of Alice’s eternal appeal is that it perfectly captures this change into one surreal episode. The tale poses unanswered questions about being a grown up: is it just a matter of actually, well, growing up? At one point, Alice, like Mr Small, contemplates being the subject of a book:

'There ought to be a book written about me... And when I grow up I’ll write one – but I’m grown up now,' said she in a sorrowful tone, 'at least there’s no room to grow up any more here....Shall I never get any older than I am now?'

Another great children’s author who plays with the theme of size is Roald Dahl – he himself was a towering 6’6’! His protagonists may not be actual thumblings but they are dwarfed and belittled by monsters, from the ‘gigantic holy terror’ Miss Trunchbull in Matilda (1988), to the child-eating giants in The BFG (1982). Dahl was bullied at school and he writes knowingly about being made to feel small and insignificant by controlling adults and cruel older children. Crucially though, he imbues his child heroes with the skills to overcome these huge tyrants. 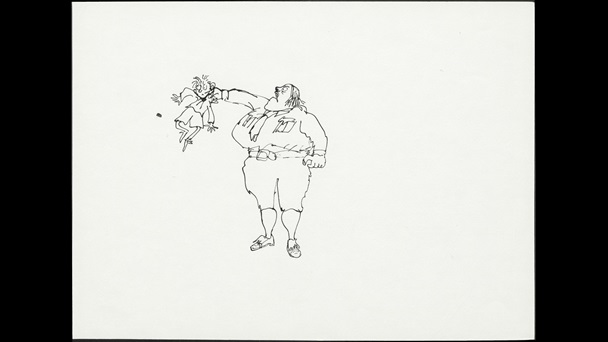 The BFG by Roald Dahl: pages from the Ideas Book and manuscript drafts 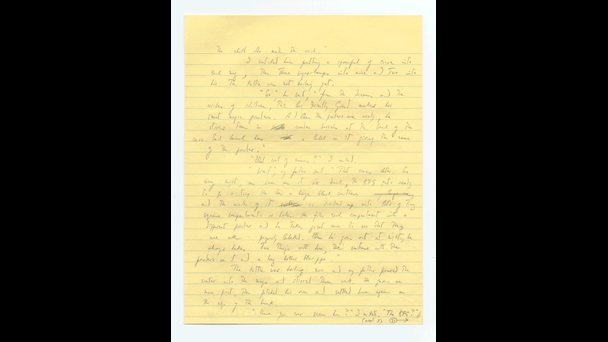 Like Tom Thumb before them, Dahl’s child heroes demonstrate that physical size doesn’t always equate with power. Sophie in The BFG, ‘a little orphan of no real importance in the world’, ultimately saves all of the earth’s children. In Matilda we’re told, ‘Being very small and very young, the only power Matilda had over anyone in her family was brain-power’. Indeed, it’s her amazing mind which leads her to overcome Miss Trunchbull. In fact, what exemplifies Dahl's tiny heroes is not principally the size of their bodies but the size of their brain, their courage or their imagination. And, at the heart of Matilda, Dahl seems to share a rallying cry to children about the power of literature. Read everything you can, he seems to say – from the tiny books of the past to the latest releases on the shelves – because the more you read, the more you know and the more you know, the mightier you are. From little acorns mighty oaks grow.

Banner image © Quentin Blake 1982. Except as otherwise permitted by your national copyright laws this material may not be copied or distributed further.

More articles on Big and small