Have you ever had tea with a tiger, or sat next to a talking toad on a train? Have you ever wondered why animals are so popular in children’s stories? Explore animal characters from Aesop’s fables to War Horse.

The first ever stories

Have you ever wished you could talk to your pet, or an animal you saw in the wild? You’re not alone. Some of the first stories ever told were about animals – such as the deer and bison depicted in prehistoric cave paintings – and storytellers have been putting words in animals’ mouths ever since.

‘What a nitwit I am,’ said the wolf, nursing his bruises.

Is that how you would imagine a wolf speaking? This one was first given speech by Aesop, an Ancient Greek storyteller credited with a series of fables, told around 620–524 BCE. 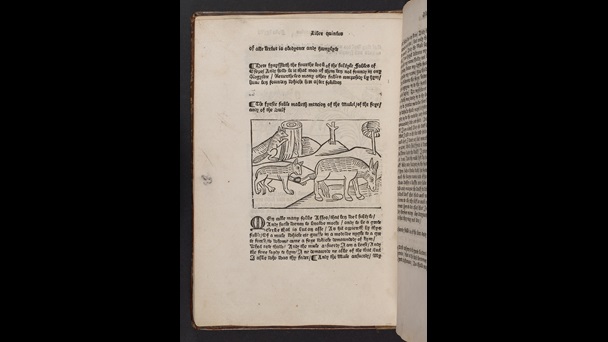 Aesop liked to imagine animals teaching us lessons about life. In this tale, ‘The Wolf and The Donkey’ (updated by Michael Morpurgo in 2004), a wolf makes the mistake of trying to help an injured donkey, rather than eat it – like a wolf normally would – and gets a kick in the head for his troubles. He should have stuck to behaving like a wolf, suggests Aesop. What moral do you think he wanted his audience to learn from that?

When Aesop told his stories, wolves were very common all over Europe. Our earliest ancestors had learned to hunt with wolf packs and respected their intelligence. But by the Middle Ages, there were many more cities, villages and farms, reducing the habitat available to wolves and other wild animals, who retreated to wilder and darker places. Many medieval writers believed that God had made humans superior to animals, and wrote ‘bestiaries’, which are picture books full of different animal stories designed to illustrate this belief. But rather than animals teaching us lessons, as in Aesop, these tales instead showed how important it was for humans not to behave like animals if they were to enter Heaven. What lesson do you think this poor beast, killed by a spear, is teaching his hunters? 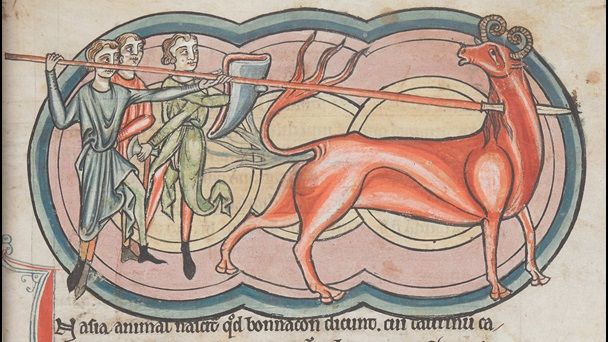 Down the Rabbit Hole

As time went by, and wolf and bear populations declined across Europe, the relationship between animals and humans continued to change. 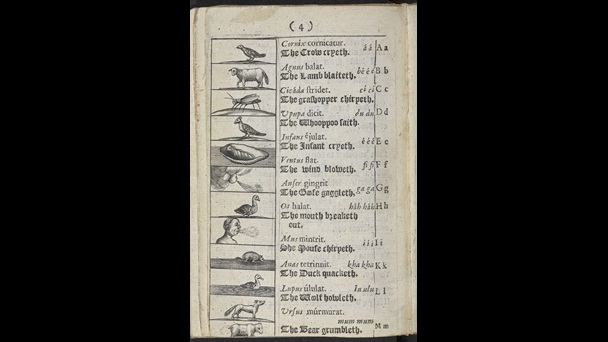 One of the earliest books for children introduces us to 300 fascinating animals – but can we believe everything it tells us? It was created by Thomas Boreman, one of the first publishers to design books that taught children new knowledge while also keeping them entertained.

A Description of Three Hundred Animals 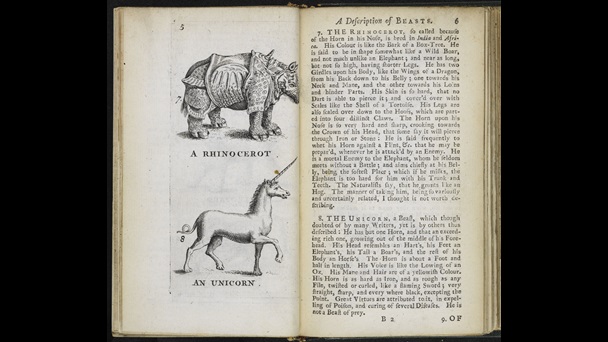 Can you spot anything unusual? Alongside tigers, rhinos and insects, the book includes made-up wild animals, like the unicorn. Many people believed unicorns – especially their horns – to have magical properties. I wonder if talking was one of them…

The first great children’s books – in the form we are familiar with today – were written during the Industrial Revolution. This era had a dramatic effect on the natural world, from the pollution created by new factories to the loss of animals’ natural habitats such as forests. Perhaps it’s not surprising that Alice must go down a rabbit hole to discover the animals in Alice's Adventures in Wonderland (Lewis Carroll, 1864). There are lots of creatures down there, from white rabbits to smiling cats, and they all talk. But what they say doesn’t always make immediate sense, like these words spoken by the Cheshire Cat: 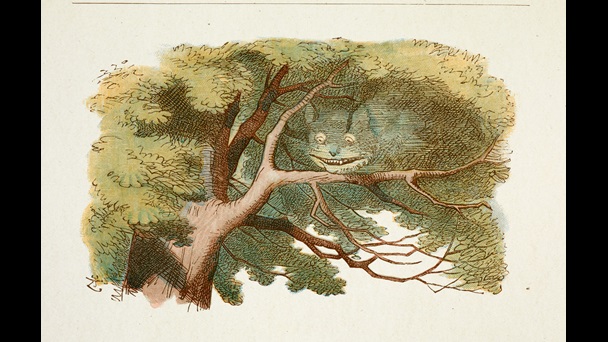 Around the same time, Edward Lear’s love of animals inspired him to write and draw a great number of peculiar characters. Like Lewis Carroll, he created strange, funny and silly stories and poems – known as ‘nonsense’. ‘The Owl and the Pussycat’ (1871) is one of his most famous poems:

The Owl and the Pussy-cat went to sea
In a beautiful pea-green boat,
They took some honey, and plenty of money,
Wrapped up in a five-pound note. In contrast, at the turn of the century, Beatrix Potter based her first animal story, The Tale of Peter Rabbit (1902), on a very real animal – her mischievous pet rabbit, Peter Piper. For all of her famous characters – from Peter Rabbit to Mrs Tiggy-Winkle – Beatrix Potter carefully observed and drew animals from life. Although they talk and occasionally wear clothes, Potter wanted to make her fictional animals as realistic as possible. After all, what do rabbits do in real life? They steal vegetable crops from farmers, just like Peter does, even if they aren’t always wearing a blue jacket while they do… Like Lewis Carroll, Edward Lear and Beatrix Potter, many children’s authors have turned animals into friendly, lovable characters. Rudyard Kipling takes that idea one step further, in making animals who might not be that friendly in real life – such as wolves – as kind as our parents. Meet Akela, the leader of the pack in Kipling’s Jungle Book (1894):

‘How little! How naked, and – how bold!’ said Mother Wolf softly… ‘Now was there ever a wolf that could boast of a man’s cub among her children?’

Yet even as Kipling was writing this story about how Mowgli, the orphaned human child, is protected by animals in the jungle, humans were hunting real wolves and other wild creatures to extinction across the globe. How does that make you feel about the animals in his story? In the 20th century, the age of the airplane, skyscraper and nuclear bomb, humans lived more apart from animals than ever before.

Some writers, like Kenneth Grahame, made his animal characters more like people than anything you might encounter in the wild. Wind in the Willows is the first ever book to feature only talking animals as the main characters.

‘Heard the news?’ Rat said. ‘Toad went up to Town by an early train this morning. And he has ordered a large and very expensive motor-car.’

Have you ever met a toad who took the train and liked driving expensive cars, or a mole and a water vole who go on a boat picnic together? Still today, there’s no shortage of writers using animals in their stories in the most inventive and varied ways.

The Wind in the Willows: Letters from Kenneth Grahame to his son, Alastair (‘Mouse’) Grahame A A Milne might have been inspired by Aesop in making his bear character, Winnie the Pooh, a philosopher full of life lessons. But I wonder if Milne’s animals sound more like children than Aesop’s did?

'What day is it?' asked Pooh.
'It's today,' squeaked Piglet.
'My favourite day,' said Pooh.

If they do, that’s perhaps because A A Milne based Winnie the Pooh not on a real bear, but on a beloved toy one belonging to his son. He is no more writing about actual bears and piglets than Judith Kerr is seriously suggesting that if a tiger came for tea in your kitchen, the results would be anything other than catastrophic. They’re both using animal characters to capture your imagination, in stories that are much more about the human capacity for love and friendship than our relationship with other species or the facts of their lives.

Winnie-the-Pooh by A A Milne, illustrated by E H Shepard: original sketches and artworks Usage terms © The estate of E H Shepard / Victoria and Albert Museum, London. Except as otherwise permitted by your national copyright laws this material may not be copied or distributed further.

The Tiger Who Came to Tea by Judith Kerr: sketches and original artwork Usage terms © By Judith Kerr. Finished illustrations copyright © Kerr-Kneale Productions Ltd 1968. You may not use this work for commercial purposes. Please credit the copyright holder when reusing this work.

Some writers don’t even base their books on real animals at all. The Gruffalo (1999), as far as scientists can ascertain, doesn’t exist. It’s a made-up animal, part warthog, part dinosaur, part bear, part who-knows-what, completely invented by the author, Julia Donaldson, and brought to life so vividly by illustrator Axel Scheffler. At the beginning of the story, the mouse thinks he has invented the Gruffalo – before he meets a real one! Usage terms From The Gruffalo, first published in 1999 by Macmillan Children’s Books, an imprint of Pan Macmillan, a division of Macmillan Publishers International Limited. Reproduced by permission of Macmillan Publishers International Limited Copyright © Text Julia Donaldson 1999 / Illustrations Axel Scheffler 1999. Except as otherwise permitted by your national copyright laws this material may not be copied or distributed further.

But does it matter whether the animal is real or not? For Varjak Paw (2003), the author S F Said invented a new breed of cat – the Mesopotamian Blue. In this adventure story, Varjak leaves home and risks everything to save his family. This made-up cat shows us courage, the value of friendship, the dangers of isolating ourselves from the world – as well as the power of our imaginations. Usage terms Text © SF Said. Illustrations © Dave McKean. You may not use the material for commercial purposes. Please credit the copyright holder when reusing this work.

But as writers, along with scientists, politicians and activists, have become more aware of the huge price animal populations have paid for human progress across the globe, animals have started featuring in stories as real animals once more.

In War Horse (1982), Michael Morpurgo draws attention to the fact that while books about jolly talking wildlife like The Wind in the Willows were being written, real animals were suffering in huge numbers on the Western Front, in World War One. The story is narrated by the main horse character, Joey. It’s very unlikely that a horse could write down a story, but does that make what he says more, or less realistic and believable than the Gruffalo?

It was as I staggered out of one such crater that I lumbered into an invisible coil of barbed wire that first snagged and trapped my foreleg.

This is an animal in danger and pain, as the result of human conflict. How do you feel about Joey the horse’s story, compared to those of Winnie the Pooh or Akela the Wolf? Michelle Paver’s Chronicles of Darkness series (2004–19) is based on real travel trips and detailed archaeological research, leading to a story that imagines how humans and animals once possibly co-existed in the Stone Age. The first book in the series, Wolf Brother (2004) tells the story of a young boy, Torak, on his own in the wilderness. He forms a relationship with a wolf, a cub that is his age equivalent. And the wolf doesn’t speak – not in a human language at least.

Torak didn’t know how to say ‘mountain’ in wolf-talk, so he guessed, gesturing with his head and asking – in the low, intense yip-and-yowl which forms part of wolf talk – if the cub knew the way… Nothing in its movements told Torak that it had understood his question. It was simply a cub again.

We have come a long way in looking at how animals talk in stories, from fables and fairy tales to the natural history on show above, yet we still have a long way to go in rebuilding our real world relationship with those same wild creatures. Aside from pets and animals in zoos, human beings lead more and more separate lives from the millions of other species on this earth. Perhaps it has become not only more important to encounter them in stories, but for the first time, to listen to what they have to say.

More articles on Animals that talk