Fun beside the sea

Few holidays evoke the same nostalgia for so many people as the British seaside getaway. Listen to the sounds of this beloved institution, and explore the history of how this classic trip became a golden standard for generations of people.

The sight of colourful beach huts, the feeling of sand between the toes or the smell and taste of the salty sea breeze – these are enduring memories that many conjure up when thinking of holidays by the sea. The soundscape too, from the screech of hovering seagulls to the crashing of waves on the beach, holds a powerful place in memory. Though many have experienced the classic seaside trip, its origins some 300 years ago are a little less well known.

Rise of the seaside resorts

The traditional British seaside holiday actually has its origins in health rather than pleasure. The restorative properties of seawater were promoted during the mid 18th century, during which the upper echelons of British society packed their cases for the coast. Dr Richard Russell, a British physician, praised the virtues of sea-bathing in A Dissertation on the Use of Sea-Water in the Diseases of the Glands (1752) as a cure for everything from scurvy and jaundice to so-called ‘king’s evil’ (scrofula) and leprosy.

Sea-bathing and spas continued to rise to prominence. In the early 19th century, Sake Dean Mohamed, an Indian surgeon, introduced shampoo baths to Britain. Setting up his own bath in Brighton, he offered therapeutic massage to some very powerful people, and was even appointed King George IV’s personal ‘shampooing surgeon’. 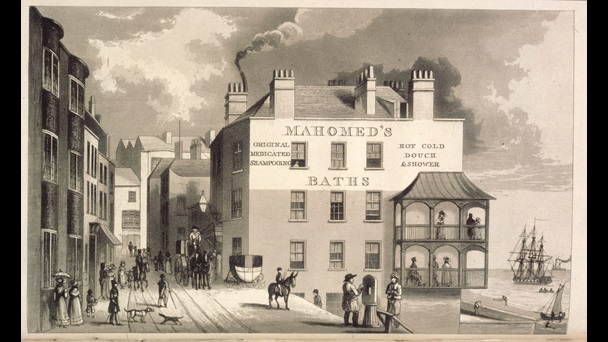 Mahomed's Steam and Vapour Sea Water Medicated Baths, where patients were treated for muscular ailments with champi and steaming baths.

As the reputation of sea-bathing increased, it wasn’t long before theatres, libraries, assembly rooms and smart hotels began to pop up along the coastline. After all, visitors needed something to do between those essential sea-bathing sessions. So splendid were towns such as Brighton, Margate and Scarborough, that the sea soon became just a single facet of a much larger, multi-sensory experience. The seaside resort, with all its draws, was born.

In the 19th century, numerous developments opened up the seaside holiday to the masses. One of these was a booming economy resulting from industrial growth, bringing about higher wages and disposable income for a large section of the population. The other critical factor was the development of the railway, which revolutionised our nation’s relationship with the coast. The Liverpool and Manchester Railway opened as the first inter-city passenger railway in September of 1830, and in the following decades rail travel further expanded. Just over a decade later, the Railway Regulation Act of 1844 ensured that affordable travel would be available to people of all classes.

All Aboard for Margate, by Florrie Forde

‘All Aboard for Margate’ was recorded before 1910, and shows the popularity of visiting the seaside in Britain – an activity that had been made accessible thanks to the advent of the railway and the savings it brought in both time and money.

[00:00:42.360] - Florrie Forde
I know a place where the soft breezes blow, and without doubt it's the one place to go. Down by the river, it's not far away. Make a start with the girl of your heart on a summers day.

So what had initially begun as a place of restorative comfort for the wealthy was now open to everyone. As long as they could afford a train ticket, people could use the coast as a place of pleasure, relaxation and a break from everyday life. The British seaside holiday had finally arrived.

The golden age of the seaside resort

The interwar years saw much investment in seaside resorts, and the government lent financial support to ambitious seaside development projects in towns such as Hove and Blackpool. Further developments during this time included the building of new modernist buildings, such as the Casino in Blackpool, and the opening of Butlin’s Skegness, Britain’s first holiday camp, in 1936. By the late 1940s, millions of holidaymakers were gracing Britain’s seaside each year; for decades tourism was the foundation of the economy in many coastal towns.

I do like to be beside the seaside, performed by Tim Laycock

The song ‘Oh I do like to be beside the seaside’ was written by J Glover-Kind and became popular when performed by Mark Sheridan, a famous music hall comedian in the early 20th century. The song’s popularity continued, and it was performed by Tim Laycock at Dartmoor Folk Festival in 1998 – almost a century later.

Sounds from a seaside amusement arcade

Amusement arcades provide entertainment to the people who visit the British seaside each year. Their automated gaming machines allow players of all ages the chance to spend a few hours playing reliable classics such as Space Invaders and Pacman. There’s the tantalising chance to win big … but if you don’t succeed, then ‘better luck next time’…

But by the 1960s the popularity of seaside holidays in Britain had begun to wane. The introduction of budget airfares and travel packages meant that British holidaymakers could continue to hit the beach, just outside of Britain, at destinations further afield. This decade also saw a reduction of the rail network following pressures for profitability; less economically valuable lines were closed or reduced, impacting access to smaller coastal towns.

This waning popularity and falling visitor numbers meant that some resorts began to see less investment. No longer filled with the same joyful noises, the golden era of the classic seaside holiday had passed.

In recent years, however, there have been efforts to revitalise the economy of some seaside towns.[1] Nationwide grant programmes, investment initiatives and the work of various grass-roots movements have seen a revival in tourism for some seaside towns. Places such as Brighton have remade their image and are now magnets for a trendy subculture, whilst others, such as Margate, in its revived Dreamland, have recaptured the nostalgia of the mid 20th century.

Art Apocalypse was created by Tim Hunkin, an artist and engineer based in Suffolk, adapting the program for the 1990s shooting game ‘Quick and Crash’. The player is tasked with shooting various pieces of art – from a Banksy and a Vettriano to a Hepworth. On the final shot, the player is rewarded by the Hepworth exploding into pieces.

[00:00:03.770] - Tim Hunkin
No. Well this was, I actually made this originally quite a long time ago for the main arcade not for this place 'cause it takes up quite a lot of space. And it didn't do well in the main arcarde, so it came back to me. And, I had another go at it last year with Andy and we improved it quite radically and it's popular now. I'm pleased with it - 'cause it's, actually I didn't make this machine, I just really changed the exterior of it and tweaked the appearance of it. It's a Namco game from 1991 called 'Quick and Crash' . But I changed this into a, rather than shooting at targets, into shooting at works of art. So you've got a Banksy, a Barbara Hepworth and a Vettriano. Basically. [laughs] You have to go through several stages of just shooting the Banksy and the Vettriano. Sometimes the first static and then moving, and eventually you get to the final stage where you can shoot a Barbara Hepworth in the middle and when you shoot that one it shatters apart. It's a wonderful illusion which is why I liked the original game. So it's actually a Pepper's ghost as a sloping sheet of glass in there. And when you hit the sculpture a black cover comes over the sculpture - very quickly you can't see it - it just suddenly disappears. At the same time, another mechanism shoots a load of white chips up in the air and it just looks as if you, for all the world, as if you'd smashed the Barbara Hepworth. It was very satisfying.

Although not with quite the same intensity as in its heyday, fun beside the sea lives on, and on a hot sunny day in the British Isles there’s no doubt that there will be always be people jostling for space on the beach.