We have manuscripts dating back to the 17th century, early printed books, newspapers and periodicals, and modern research-level publications in the humanities and social sciences.

The British Library holds around 1,800 manuscripts from Myanmar. Most are written on palm leaf, but there are also many paper folding books (parabaik), and texts written on diverse materials such as gold, silver, copper and ivory sheets in the shape of palm leaves. As well as Burmese works, there are many Pali canonical texts and also works written in Arakanese, Shan and Mon. The collection is particularly strong in historical, legal and grammatical texts, and in illustrated material. It includes:

The printed book collection includes rare examples of early Burmese printing, many acquired under the Press and Registration Books Act from 1867 through to the 1930s. The British Library also holds printed books in Pali and in other languages of Myanmar including Shan, Karen, Mon, Kachin and Chin. There is an important collection of books, serials and ephemera from the 1980s relating to the Pro-Democracy Movement.

60 manuscripts in Burmese, Arakanese, Shan, Mon and Pyu have been digitised so far. For a full list see Digital access to Burmese manuscripts.

The British Library's online catalogue Explore the British Library includes all books and periodicals in the collection. Some early printed books have been digitised and are accessible via the catalogue through 'Available online (beta)' search. Consult the Myanmar (Burma) Help Guide for further information on how to find material.

Early printed books from the British Library are also available on the Southeast Asia Digital Library.

The Visual Arts collection holds photographs, prints and drawings relating to Myanmar. These can be searched via Explore Archives and Manuscripts.

Hundreds of digitised photographs relating to Myanmar are available on Explore the British Library catalogue through 'Our website' search.

The Endangered Archives Programme includes the Myanmar photographic negatives project with thousands of digitised photographs available ranging from 1940s-1980s. These photographs can be searched via Explore Archives and Manuscripts.

The British Library's Maps collection includes some early maps from Myanmar. These can be searched via Explore Archives and Manuscripts.

All manuscripts and printed books can be consulted in the Asian and African Studies Reading Room with a Reader's Pass. Some printed books which are stored at Boston Spa in Yorkshire may take up to 48 hours to be made available.

Self-service photography is allowed for most material.

On the British Library's collections

On collections in other libraries 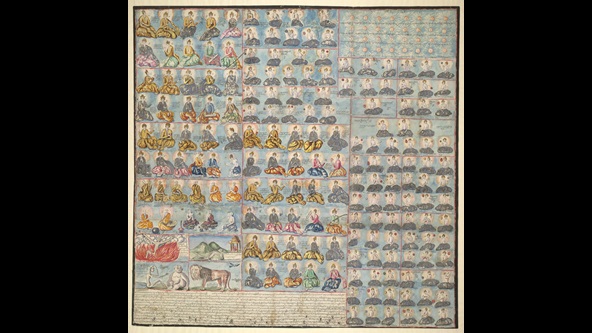 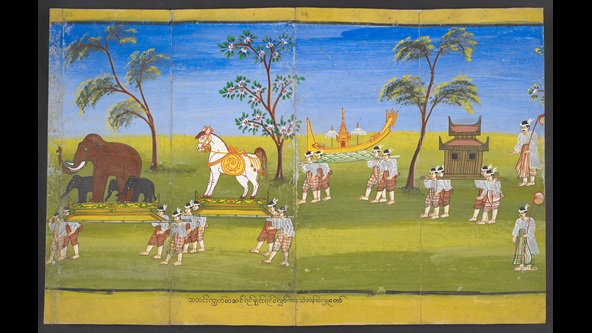 Depiction of a procession during the Buddhist Thadingyut festival

Transcribed from the boundary wall of the universe: Early Dhammasattha manuscripts in the Burmese collection of the British Library

The British Library’s Burmese collection holds some of the earliest extant dhammasattha manuscripts in the world. The dhammasattha, or “treatise on the law” is a genre of Buddhist literature prevalent in mainland Southeast Asia, written in Pali and in a...

Kālāma Sutta and the premise of free thinking

Tipiṭaka or the ‘Three Baskets’ forms the canon of the teachings of the Buddha written in Pāli. The second ‘Basket’, Sutta Piṭaka, contains five Nikāyas or ‘collections’ of thousands of discourses attributed to the Buddha and his disciples. The Aṅguttara...

The Burmese Harp: (3) Heaven and Earth

In my two previous blogs on the Burmese harp - (1) Seduction of the Senses and (2) Matters of the Heart - I gave examples of how the Burmese harp or Saung was incorporated into Jātaka stories (stories of the...

The Burmese Harp: (2) Matters of the Heart

In my previous blog The Burmese Harp: (1) Seduction of the Senses I gave examples of how female harpists were depicted in Burmese manuscript illustrations. In this blog I will discuss stories of male harpists that appear in Jātakas, or...

Exhibition catalogue for the Buddhism exhibition at the British Library, 2019.

A print from a Burmese Buddhist cosmology manuscript