Detail from a Thai palm leaf manuscript containing extracts from the Tipitaka, 19th century. Shelfmark: Or.16753

The British Library has approximately 450 manuscripts in Thai, Northern Thai, Lao, Khmer, and Pali languages.  They include Buddhist scriptures, literary works, and treatises on traditional medicine, law, cosmology, fortune-telling and animals. Most of the manuscripts are paper folding books and palm leaf manuscripts, but there are also textiles and wooden manuscript boxes. Important manuscripts in this collection are a Thai historical chronicle, copied by royal scribes ca. 1840 (Or. 11827), an outstanding Elephant Treatise (Or. 13652), several Phra Malai manuscripts as well as the Chakrabongse Collection of Thai Royal Letters (Or.15749). Other languages covered in this collection are Ahom, Khamti, Khasi, Tai Lue, Tai Khuen, Shan and Mon.

The earliest period of Thai printing, from ca. 1840-1890, is well represented in the British Library due to a gift by Christian missionaries of about 100 books and pamphlets. Some of these are unique copies including the only known copy of the first Thai book printed in Thailand, a Christian text published in 1838 (ORB.30/894).

The collection includes more than 8000 printed books in Thai, dating from the mid-19th century onwards, and over 700 books in Lao, Khmer and Hmong languages.

There are also about 50 periodical titles from Thailand, Laos and Cambodia.

The British Library’s online catalogues, Explore the British Library (for printed books and periodicals) and Explore Archives and Manuscripts, include all Lao items and many in Thai and Cambodian.

All Southeast Asian manuscripts and printed books can be consulted in the Asian and African Studies Reading Room. Some printed books which are stored at Boston Spa in Yorkshire may take up to 48 hours to be made available.

Thai and Cambodian printed books and serials acquired before 2000 are accessible only through a card catalogue in the Asian & African Studies Reading Room.

Digital Library of Lao Manuscripts (Digital collection of over 12,000 texts from Laos, collaboration of the National Library of Laos, University of Passau, and the Berlin State Library) 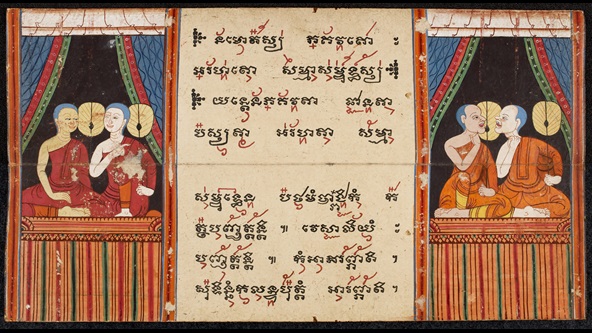 Extracts from the Tipitaka 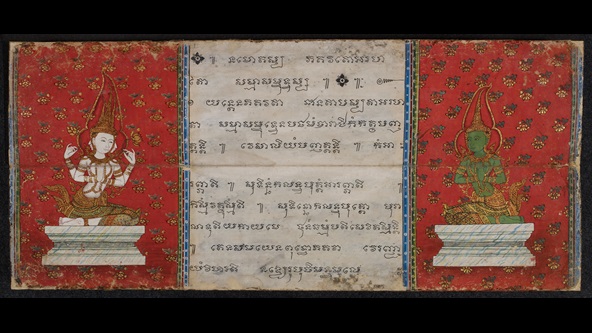 The history of Khmer manuscripts is closely connected with the influence of Indian civilisation in Southeast Asia and particularly with the introduction of Hinduism and Buddhism in the region. The earliest book format in the Khmer Empire – similar to...

A stupa (Sanskrit for “heap”) is an important form of Buddhist architecture as a place of burial or a receptacle for sacred religious objects, which has its origins in the pre-Buddhist burial mounds of ancient India. The earliest stupa contained...

Chariots figure prominently in South and Southeast Asian art and architectural decoration. Borrowed from the Sanskrit word ratha, the chariot is called rot (รถ) in Thai and has a special importance in religious traditions in Thailand, especially those related to...

Exhibition catalogue for the Buddhism exhibition at the British Library, 2019.