Chapbooks were small, affordable forms of literature for children and adults that were sold on the streets, and covered a range of subjects from fairy tales and ghost stories to news of politics, crime or disaster. Dr Ruth Richardson explains what this literature looked like, its subject matter and the ways in which it was produced.

Chapbooks were small booklets, cheap to make and to buy. They provided simple reading matter and were commonplace across the country from the 17th to the 19th century. They were often charming little books but they were also flimsy, and although they might have been treasured by readers, they have mostly proved ephemeral having been thumbed, pocketed, and passed from hand to hand, and down the generations. Their readership would have been largely among the poor, and among children of the middle class.

Like broadsheets, ballads, and long songs, chapbooks covered a very wide range of subject matter. They range from alphabet books and religious stories and prayers, to short biographies, dramas, heroic tales and traditional stories, news of politics, crime or of disaster, songs and jests, riddles, almanacs, miraculous or ghost stories, prophecies and fortune-telling, dream interpration and tales of travel, battle or adventure. Although from their size it might be assumed that they would have appealed mainly to children, literacy was increasing during the 18th and 19th centuries, and these little works were likely intended for any poor reader whose skills were rudimentary. Occasionally, particularly when the content is political in nature, or reporting terrible crimes, it is evident that a chapbook was intended primarily for adult readers, but invariably, their appeal is wide.

Ordinary chapbooks were unpretentious little volumes, sold by their printer-publishers directly to individual purchasers, but also in larger numbers at wholesale prices to other shopkeepers and to itinerant vendors, who would hawk them about the streets, or carry them further afield. Travelling vendors, or chapmen, who came to urban centres to fill their packs carried bootlaces, ribbons, needles, pins, lace, buckles, whistles, buttons, seeds and spices, gloves and fans and other small necessities or luxuries difficult to obtain in quiet rural villages. Tucked in amongst their pack they would often have some reading matter, like ballads or chapbooks – light to carry, and sought after by eager readers. Indeed, the word ‘chap’ comes from the Old English word for trade.

The Groans of the Gallows 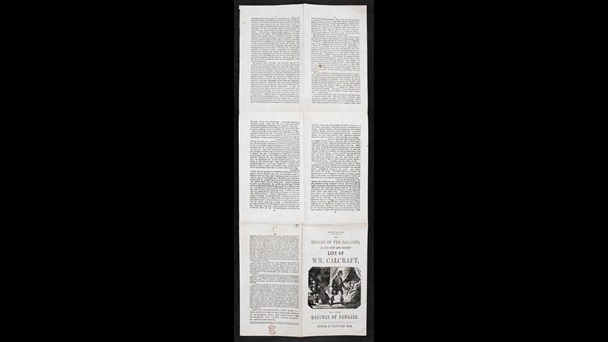 The Groans of the Gallows (1846) shows how a chapbook was designed as a single sheet, to be folded, then bound, with the edges of the pages cut to make a complete book.

Chapbooks varied in size, depending on the size of the original paper and the number of folds, but were generally 6x4 inches (c. 15x10cm) or smaller. Sometimes they were very small indeed, perhaps only a couple of inches (c. 4–5 cm) tall. Their thickness varies: they could have 12, 16, 24, 32 or even 40 pages, but some of the smaller half-penny books had only eight pages (two very small sheets fixed at the central hinge to make four leaves). They were often well-designed, with good typography and layout, good illustrations and well-crafted title-pages, but there are also examples whose pages were printed awry, poorly inked and/or poorly typeset, with cracked or worn woodcuts, or images that bear no relation to the text. Such things have a certain sorry charm, but one cannot help thinking that the printer – or even the apprentice – could have done a better job!

Printer-publishers would often try to appeal to a slightly more affluent readership by adding a card or coloured-paper cover (or 'wrapper') or by having the illustrations hand-coloured. These additional embellishments might more than double the price raised – the famous phrase was 'penny plain, twopence coloured'. Larger and more upmarket chapbooks could fetch threepence, sixpence, and some – such as Sam Syntax shown below – cost even greater sums. 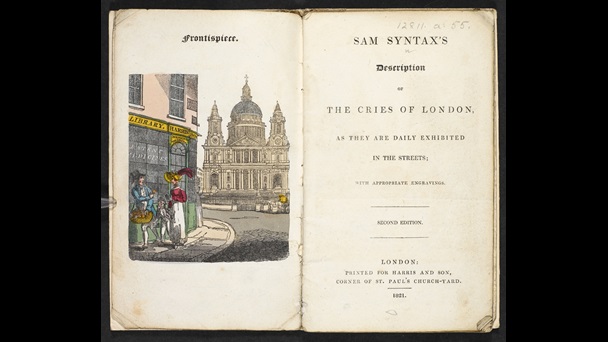 Sam Syntax's Description of the Cries of London is an example of an expensive, lavishly-produced chapbook, 1821.

Chapbooks were made by printing on one or both sides of a single sheet of paper, which were then folded in a particular way: in half, and in half again, continuing down until the correct size was reached. Then the main fold (usually down one of the long sides) would be hand-sewn and the remaining edges trimmed to form pages, so the whole thing would become a small paper-covered book. They usually featured at least one woodcut illustration – often on the cover, sometimes as a fold-out frontispiece – to encourage the reader to be interested in the content. Many had small woodcuts inside, too.

Most chapbooks were the products of domestic-scale industry. They were hand-printed on manual presses, and the folding, sewing and trimming would all also be done by hand; so too would the colouring of illustrations, the folding and tipping-in of frontispieces and the pasting on of wrappers. Much of this labour would have been carried out by women and/or children, who were cheap to employ because they were poorly paid. Perhaps in some cases output would be a family affair, with the whole of the printer's family contributing to the manufacturing effort; but doubtless busy printers also employed poorer folk to undertake the work in their own homes.

There seems to have been a manual form of mass production in progress in London right into the mid-19th century. The son of a London chapbook publisher remembered 'regiments of children' being employed to dab one colour in one place on each sheet, ahead of folding and sewing. Some chapbooks are much more carefully coloured than that, but the image of regiments of poor children colouring reading books for richer children to read is not a happy one. 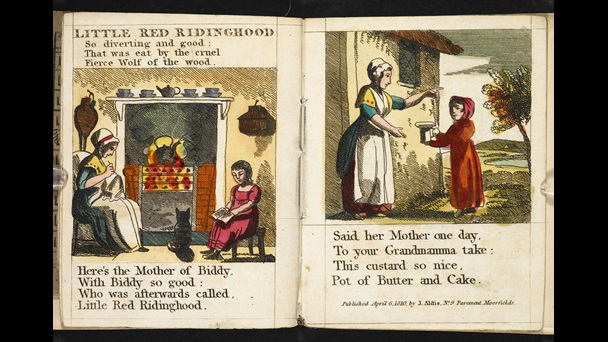 1810 chapbook edition of the popular fairy tale Little Red Riding Hood with hand-painted prints. Much of this labour would have been carried out by women or children.

Because of the need to keep the costs of manufacture to a minimum, the paper of which these little books were made was usually of poor quality, and so too was the thread holding them together. Nowadays they are highly valued, but for long among the generality of book-collectors they were considered cheap trash. So, although chapbooks were printed in great numbers, the vast majority of them have perished. Specialist libraries – like the British Library – hold collections of chapbooks, but we know from the advertisements that these little works sometimes contain that only a fraction of any printer's output has survived.

In the 19th century, steam paper-making and steam printing led to mass production and to the cheap availability of other reading matter, while steam railways brought new means of distribution. There have always been those that loved these little books, both collectors and imitators. Robert Louis Stevenson wrote the words and carved the woodcuts for his Moral Emblems (1882), which provide a delightful instance in which a literary figure who appreciated the historical chapbook tradition created works of imitation that carry a similar charm – in rhyming scheme and simplicity of illustration – to the chapbooks of his own childhood.

When chapbooks fell out of vogue, they underwent a transformation into what became known as 'penny dreadfuls', 'shilling shockers', novelettes, boys' tales of adventure, and later still, comics. 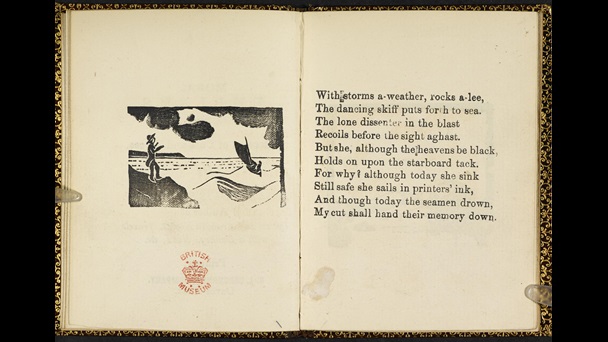 Moral Emblems by Robert Louis Stevenson (1882) uses the style of the chapbook, but in this case with a deeply ironic twist, anticipating Harry Graham’s Ruthless Rhymes for Heartless Homes (1898) and Hilaire Belloc’s Cautionary Tales (1907), satirical takes on Victorian morality poems for children.

Margaret Spufford, The Great Reclothing of Rural England: Petty Chapmen and their Wares in the Seventeenth Century (London: Hambledon Press, 1984)