The West India Regiments in the Anglo-Ashanti War, 1873–74

Melissa Bennett explores the West Indian Regiment’s presence in West Africa, their involvement in the Anglo-Ashanti War in the 1870s, and its immediate consequences for both the regiment and the British Empire at large.

The presence of the West India Regiments in West Africa

The first contact those on the African continent would have had with the West India Regiment would have been through the recruiting station established on Bance (now Bunce) Island in the Sierra Leone River in 1812.

The recruiting station closed in 1816, but in 1818 it was decided to garrison the West African coast with soldiers from the West India Regiment, and so the Regiments once again had a permanent base on the West African coastline. The practice of one battalion of a Regiment serving in Sierra Leone and one in the West Indies with an exchange every three years became routine. The use of the West India Regiments in Africa, like in the Caribbean, was due to the belief that as men of African descent they would be able to better deal with the African climate and local diseases. 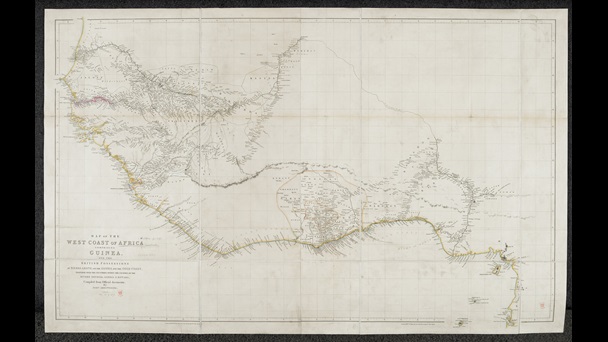 This map shows the West Coast of Africa in 1842. It demonstrates that the Ashanti Kingdom was bordered by British claimed territory on all sides, which would have been an important reason for the British to try and expand into their territory.

In 1867 the British Gold Coast was formally established. It was expanded in 1872 when Britain purchased the Dutch Gold Coast from the Netherlands; this area included Elmina, which was claimed by the Ashanti. As a result the Ashanti invaded the British protectorate. 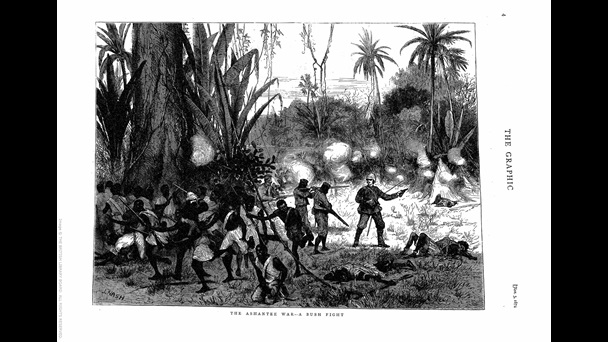 This illustration of the Ashanti War comes from The Graphic a popular British weekly illustrated newspaper. It details a bush fight between the West India Regiment, who are led by a white British officer, and Ashanti fighters.

The Ashanti War and the involvement of the West India Regiments

In 1874 British troops led by General Garnet Wolseley advanced into the Ashanti kingdom with the aim of reaching its capital, Kumasi. They were reacting to the invasion of the British protectorate by the Ashanti a few months earlier. Action began on the 1 January 1874, and during the advance on Kumasi 483 soldiers of the 1st and 2nd West India Regiments were accompanied by 1,457 European troops and 8,500 carriers.

It was difficult to recruit enough carriers to support British troops through the conflict, and by the fourth day of the march to Kumasi the supply of carriers ran out. As a result, the soldiers of the West India Regiments were called upon to carry supplies for the white British regiment in addition to their own arms, accoutrements and ammunition. This demonstrated that they were not seen as equal to their white counterparts, who would not have been expected to do the same for them. 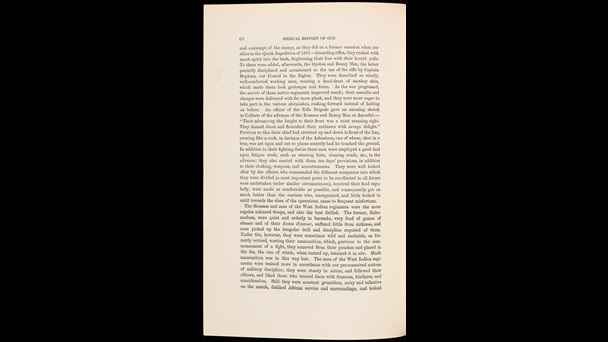 Albert Augustus Gore was a Surgeon General in the British Army and acted as sanitary officer during the 1873-1874 Ashanti War. This extract comes from his Medical History of our West African Campaigns that details some of his medical findings from his time in West Africa.

The 1st and 2nd West India Regiments did not have a combat role in the major battle of the campaign that took place at Amoafo on 31 January. When British forces reached Kumasi on 4 February the soldiers of the Regiments were not called upon to enter the city, even though their labour had been essential in supporting the campaign to take it. James Caulfeild, a lieutenant in the 2nd West India Regiment at the time who later became a colonel and wrote a history of his Regiment, wrote in his book that 'the regiment deserved better treatment than it got on this occasion'.

After Kumasi had been taken, the war continued for a further two weeks until the King of the Ashanti agreed with the British that their demands would be met. The Ashanti were called upon to pay the British compensation and withdraw their territorial claims and warriors from areas under British control.

Photograph of a village burnt during the Hut Tax War 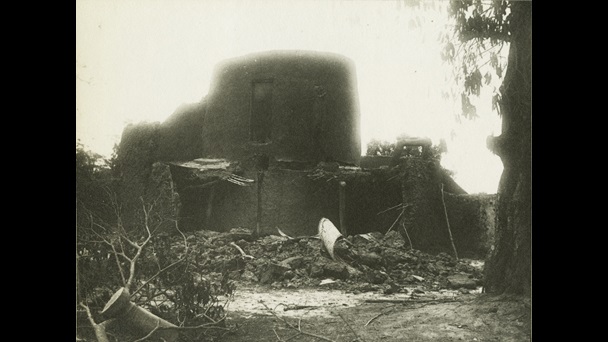 This photograph demonstrates the sort of tactics that were used by the British in ‘small’ colonial wars in West Africa. The building has been destroyed by heavy artillery, and this village was one of nearly 200 that were destroyed during this particular colonial war.

Consequences of the war for Britain and the Ashanti

Two more major conflicts would erupt in the next 30 years, in 1895 and 1900, before the Ashanti Empire was finally incorporated into the British Gold Coast colony.

The 2nd West India Regiment embarked for the West Indies on 19 March 1874, but remained off the coast of Cape Coast and then Freetown for a month, awaiting their orders to leave West Africa. During the two weeks that the Regiment were waiting off the coast of Sierra Leone, 23 men died of pneumonia, never to return home despite having survived the war. The 1st West India Regiment remained behind to garrison the Gold Coast colony.

'Arrival of the 2nd West India Regiment' from the Illustrated London News, 11 July 1874 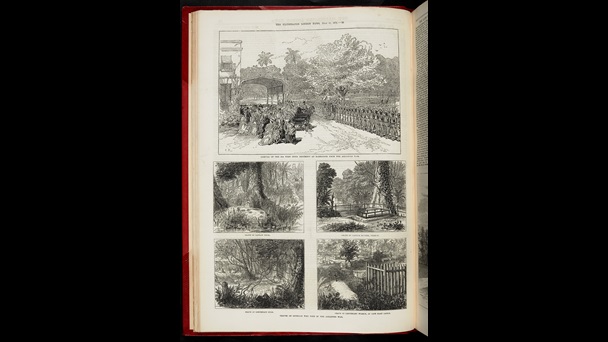 This article discusses the homecoming of the 2nd West India Regiment following their contribution to the Ashanti War, highlighting the fanfare that British troops returned to when coming back from colonial wars of expansion. In the illustration it is possible to see the Regiment lined up in their Zouave uniforms under a canopy of trees.

The Ashanti War was part of a wider attempt to gain territory in Africa in the late 19th century. Historians refer to this phenomenon as the 'Scramble for Africa', a period when European powers began to expand across the continent, often taking new territories by force. In 1870, around ten per cent of Africa was under European control, but by 1914 90 per cent of Africa had been colonised. This expansion was fuelled by a desire to establish new markets for European goods, the need to secure raw materials (such as rubber, metals, and palm oil) essential for industrialisation, and by rivalries between the great powers that were competing with each other to take over territory and secure control.