David Crystal explains how Middle English developed from Old English, changing its grammar, pronunciation and spelling and borrowing words from French and Latin.

‘Middle English’ – a period of roughly 300 years from around 1150 CE to around 1450 – is difficult to identify because it is a time of transition between two eras that each have stronger definition: Old English and Modern English. Before this period we encounter a language which is chiefly Old Germanic in its character – in its sounds, spellings, grammar and vocabulary. After this period we have a language which displays a very different kind of structure, with major changes having taken place in each of these areas, many deriving from the influence of French following the Norman Conquest of 1066.

Continuity between Old and Middle English is mainly to be seen in texts of a religious, political or administrative character, thousands of which have survived. Most of the surviving material is religious in character – about a third are collections of homilies (a type of sermon). The writings of Ælfric, in particular, continued to be copied throughout the period, and these overlap with sermons from the 12th century that are very clearly in an early form of Middle English.

Although the earliest surviving writings in the period are only about a century after the latest writings in Old English, Middle English texts feel very much closer to Modern English in their grammar and vocabulary. By the time we get to Chaucer, in the 14th century, we can find many phrases and sentences which – if we modernise the spelling – look just like an archaic version of Modern English, as in the opening of The Canterbury Tales:

Whan that Aprill with his shoures soote
The droghte of March hath perced to the roote,
And bathed every veyne in swich licour
Of which vertu engendred is the flour…

[When that April with his showers sweet
The drought of March hath pierced to the root
And bathed every vein in such liquor
Of which virtue engendered is the flower...]

The Canterbury Tales by Geoffrey Chaucer 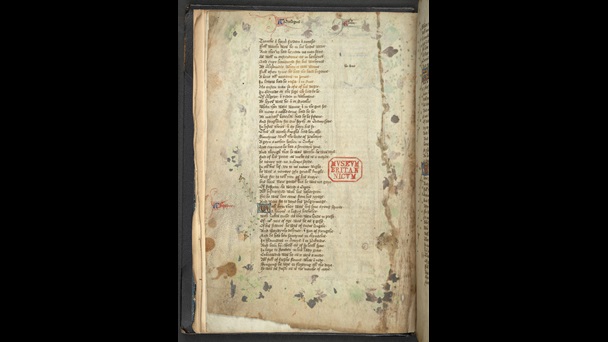 Chaucer’s English is recognisable as the ancestor of Modern English, especially if we modernise the spelling.

There is also, of course, a continuity in terms of literary content. English readers today are aware of the subject matter of the Middle English period in a way that they are not in relation to Old English. Chaucer’s tales have been constantly retold, as has Thomas Malory’s account of King Arthur and the Knights of the Round Table (Le Morte Darthur), and several modern Christmas carols are medieval in origin. 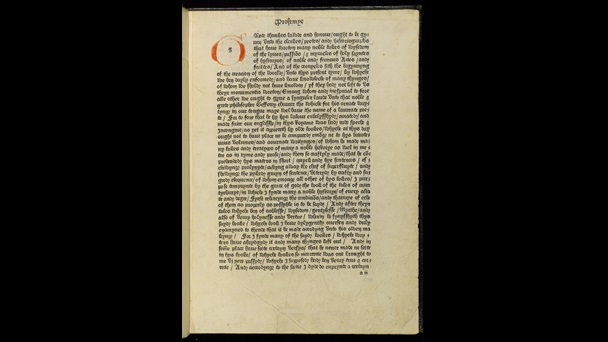 The difference between Old and Middle English is primarily due to the changes that took place in grammar. Old English was a language which contained a great deal of variation in word endings; Modern English has hardly any. And it is during the Middle English period that we see the eventual disappearance of most of the earlier inflections, and the increasing reliance on alternative means of expression, using word order and prepositional constructions rather than word endings to express meaning relationships.

All areas of grammar were affected. Among the new kinds of construction were the progressive forms of the verb (as in I am going) and the range of auxiliary verbs (I have seen, I didn’t go, etc.). The infinitive form of a verb starts to be marked by the use of a particle (to go, to jump). A new form of expressing relationships such as possession appeared, using of (as in the pages of a book). Several new pronouns appeared through the influence of Old Norse.

Other areas of language were also affected. The pronunciation system underwent significant change. Several consonants and vowels altered their values, and new contrastive units of sound (‘phonemes’) emerged. In particular, the distinction between the /f/ and /v/ consonants began to differentiate words (e.g. grief vs grieve), as did that between /s/ and /z/ (e.g. seal vs zeal). The ng sound at the end of a word also became contrastive (in Old English the g had always been sounded), so we now find such pairs as sin vs sing. And at the very end of the period, all the long vowels underwent a series of changes. The way sounds were spelled altered, as French scribes introduced their own spelling conventions, such as ou for u (house), gh for h (night) and ch for c (church). 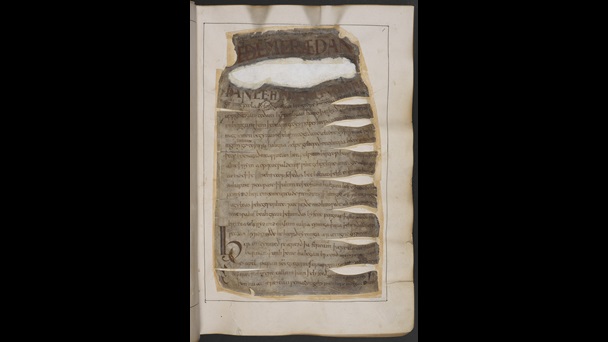 The Tremulous Hand was from the last generation of speakers who could understand Old English.

Vocabulary and the French influence on Middle English

The French influence on English in the Middle Ages is a consequence of the dominance of French power in England and of French cultural pre-eminence in mainland Europe in areas such as law, architecture, estate management, music and literature. Vocabulary was especially affected in important fields such as ecclesiastical architecture, where French architects in England adapted Continental sources for their cathedral designs. The associated terminology needed to express this shift of vision was very large, covering everything from building tools to aesthetic abstractions.

Each of the major literary works of the Middle English period provides evidence of the impact of French. By the time we reach The Canterbury Tales (c. 1400), the French lexical content is a major linguistic feature: eight of the 13 content words in the above quotation are from French – April, March, pierced, vain, liquor, virtue, engendered, flower. According to the Oxford English Dictionary, by the end of the Middle English period around 30 per cent of English vocabulary is French in origin.

The Lays and Fables of Marie de France 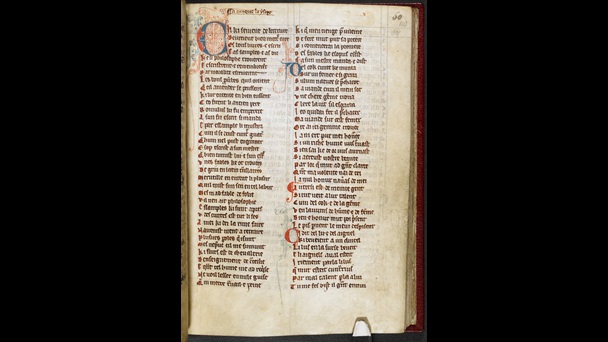 French, or ‘Anglo-Norman’ was the language of politics, legislation and literary compositon, as in the works of Marie de France, for a long time after the Norman Conquest of 1066. This had a huge impact on the development of Middle English.

Middle English also saw a huge increase in the use of affixes (prefixes and suffixes), producing an influx of new words. Excluding inflectional endings, there are just over 100 prefixes and suffixes available for use in everyday English, and at least one of these will be found in around half of all the words in the language. It is during Middle English that we find the first great flood of these affixed words, with French introducing such (Latin-derived) prefixes as con-, de-, dis-, en-, ex-, pre-, pro- and trans-, and such suffixes as -able, -ance/-ence, -ant/-ent, -ity, -ment and -tion (at the time, usually spelled -cion). The suffixes were especially productive, a trend typified by words such as tournament, defendant, solemnity and avoidance. The -tion ending alone produced hundreds of creations, such as damnation, contemplation and suggestion.

Loanwords and the growing influence of Latin

The flow of French loanwords into English reduced during the 15th century, but the overall rate of foreign borrowing did not decline because of the growing influence of Latin. Thanks chiefly to its role as the language of religion, scholarship and science, Latin words would eventually have a much greater impact on English than French. Today, just over 30,000 words (excluding derived forms) have French identified as part of their history in the OED; for Latin, the corresponding figure is over 50,000. In literature, a style developed in which authors attempted to emulate the great classical writers, with intricate sentence patterns and erudite, euphonious vocabulary. The 15th-century poet John Lydgate described it as ‘aureate’.

John Lydgate’s The Lives of Saints Edmund and Fremund 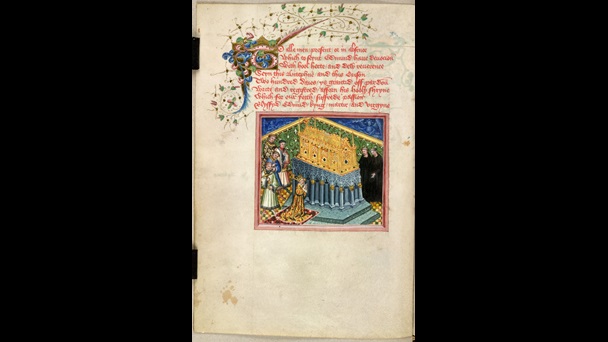 What was the scale of language change in the Middle English period?

When we take into account borrowings from other languages, such as Old Norse and Dutch, we begin to get a sense of the scale of the lexical change that had taken place during Middle English. At the end of the Old English period the size of the lexicon stood at something over 50,000 different words. Many words then fell out of use, but the rate of replacement was such that by the end of the Middle English period we see this total doubled. By 1450, something like half of the available word-stock was non-Germanic. Thanks to the nature of English grammar, which continued to give a high profile to such words as the, of, and and have, the fundamental Anglo-Saxon character of the language was maintained. And in vocabulary, too, if we were to order Middle English words in terms of their frequency of use, we would find that around half of the most commonly used words were from Old English.

The real importance of the Middle English period was the way in which this additional vocabulary became the primary means of introducing new concepts and new domains of discourse into the language, as well as giving novel ways of expression to familiar concepts within old domains of discourse. The period was offering people a much greater linguistic choice. In 1200, people could only ask; by 1500 they could question (from French) and interrogate (from Latin) as well. During Middle English we see the evolution of a language which is increasingly exploiting the potentialities of regional, social and stylistic variation. At one extreme there was a learned, literary style, typically formal and elaborate, characterised by a lexicon of French and Latin origin, and employed by the aristocratic and well-educated. At the other, there was an everyday, popular style, typically informal and casual, full of words with Germanic roots, and used by ordinary folk. The stage was set for the 16th-century literary exploitation of these resources, notably in the poems and plays of Shakespeare.