Windrush Songs was published in 2007, by which time James Berry had been living in England for close to 60 years. Hannah Lowe explores how Berry’s collection negotiates the symbol of the Empire Windrush and positions post-war migration within the legacies of slavery and colonialism.

Windrush Songs was published in 2007, by which time James Berry had been living in England for close to 60 years. During that time, he had become a notable and celebrated literary figure, known for his writing for adults and children, his work in education and for his editing of two early important anthologies of Black British writing – News From Babylon and Blue Foot Traveller. But unlike his contemporaries – writers such as Sam Selvon and Andrew Salkey, who had migrated to extend their literary careers – Berry arrived in Britain as an economic migrant, and in that sense his own life experiences were much closer to the majority of passengers on the Empire Windrush and the ships that followed. These working-class origins are elaborated upon in the introduction to Windrush Songs:

When the Windrush came along it was simply a godsend, but I could not get on that boat. I simply could not meet the expenses … It was some time before I could get myself together and sell the few pigs and goats I had, to gather up the money … I had to wait for the second ship to make the journey that year, the SS Orbita. (p. 10)

Thus Windrush figures in Berry’s personal reminiscences both as a symbol of desire, (remembered latterly as a ‘godsend’ in enabling escape from the difficult circumstances of island life) and one of frustration: he could not afford the passage, a recollection that reminds us migration was only a solution to those who could pay for it.

Berry developed his writing practice later, alongside his work as a telephone engineer. But his literary ambitions were clearly there from early on, as this note from his archive makes clear: 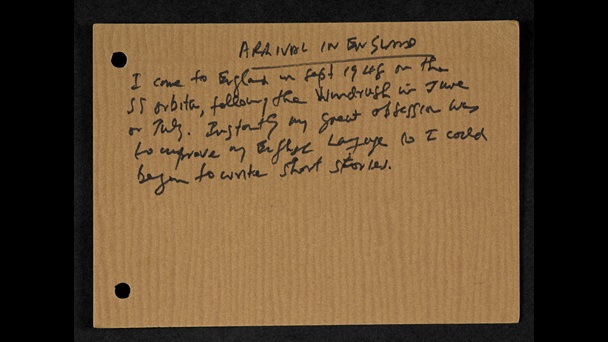 Usage terms You may not use the material for commercial purposes. Please credit the copyright holder when reusing this work.
Held by© James Berry: By permission of the Estate of James Berry

I came to England in Sept 1948 on the SS Orbita, following the Windrush in June or July. Instantly, my great obsession was to improve my English language so I could begin to write short stories.

Windrush Songs, written in Berry’s final years, suggests the importance of memorialising and recording testimony for the diasporic subject, and the book can be seen as another strand in the multifarious commemorative practices that have sprung up around Windrush. In fact, Berry had been making notes and drafts for this collection for some years, many of which can be seen in his archive at the British Library. By the time of the book’s publication, readers might well have been familiar with its tenets of the Windrush story and able to recognise the symbolic function of the collection’s title. Berry’s own understanding of the changing climate around Black British history and the subsequent priming of a commercial audience is suggested in a letter written to Neil Astley, a prospective publisher:

It’s particularly important for me to find a publisher for this new book as soon as possible because next year (2007) will be a landmark year for black people living in Britain, being the 200th anniversary of the abolition of slavery. It’s already obvious that there will be a lot of public interest and many events around this Bicentenary. (Berry, 2006) 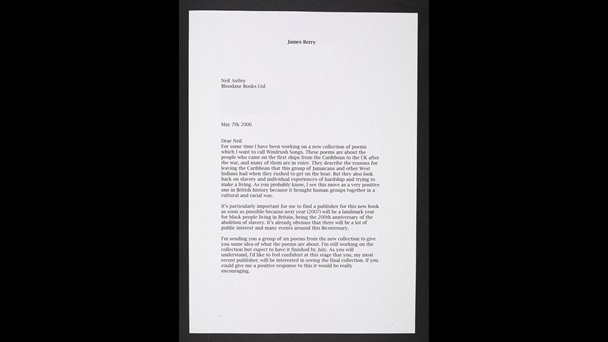 This letter from James Berry, to Neil Astley, shows his awareness that the bicentenary of the abolition of slavery would have an effect on the visibility of Windrush.

Berry’s awareness that the bicentenary will have a bearing on the visibility of Windrush, also chimes with the content of his poems, since the collection positions post-war migration within the cultural and material legacy of slavery and colonialism.

While the title of his collection gives Windrush and 1948 primacy, the poems themselves do not engage extensively with the specific ship. Migration is treated as both specific and amorphous, not wedded to the Windrush, nor separate from it. Berry employs a more general and oblique ship motif which appears in echoes, allusions and resonances – a ‘glorious world ship coming silently / on the old, old waterway’, a signal of the universal, transnational history of migration (p. 80). And despite the introduction’s hint of an autobiographical approach, the poems are narrated by a multitude of speakers with different perspectives and desires, a polyphony which destabilises the notion of authorial truth or singular story. This is an important plurality, since often the Windrush in both its actual and metonymic forms is discussed as a homogenous public odyssey, overlooking the complex personal odysseys of which it was comprised. This multi-voicing calls to mind Stuart Hall’s claim that the colonial experience is both communal – in a shared history of transportation, colonisation and migration – and about difference, in the multiplicity of, for example, ethnic/cultural inheritances, life histories and individual subjectivities (Hall, p. 227–28).

https://sounds.bl.uk/resources/windrush/C927X1543%20C1_MASTER.mp3
Update Required To play the media you will need to either update your browser to a recent version or update your Flash plugin.

‘Englan’ Voice’ was published in James Berry’s poetry collection Windrush Songs (2007). This reading was recorded at an event celebrating the British Library’s acquisition of Berry’s archive in 2016.

James Berry: © By permission of the estate of James Berry © British Library

Difference is inscribed in the very first poem, ‘Wind-rush’, which takes the familiar name ‘Windrush’, with its echoes of ‘gold-rush’ and connotations of movement, and shifts its meaning. An unnamed speaker names what will not be missed when he migrates, in particular the ‘breezeblow madness’ of the common hurricanes which bring economic destruction to his land and the whole island (p. 14). The hyphen transforms the term and makes ‘Wind-rush’ two things at once: the terrible hurricanes and the boat that offers him salvation. 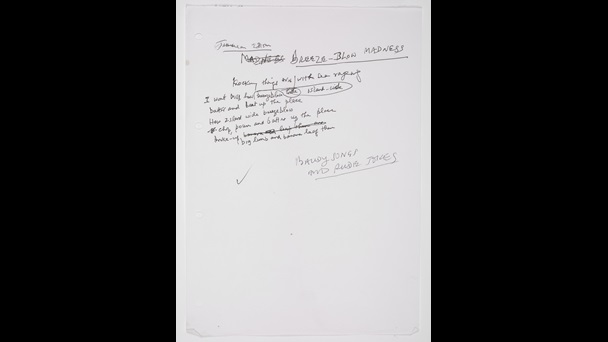 But the unstable island economy of the 1940s, where ‘Yu ketch up in a poverty trap’, is only a factor in as far as it is positioned as the residue of British involvement in the Caribbean. Jamaica is the site of forced exile and colonial exploitation, and the image of the ship evokes the earlier journeys of slave ships: ‘ancesta-them did travel … in a ship hole, / chained-up, angry, filthy, half-starved’, as well as the familiar island home the subject is rooted to (‘Comparing Now with Ancestors’ Travel from Africa’, p. 19). The physical scars left by imperial enterprises are seen in island slave burial sites, as described in ‘Old Slave Villages’:

Thus the beginnings of the Windrush story are not at the point of arrival on British shores, but much earlier, and Berry’s poetic trajectory stresses the ways in which migrants from the Caribbean were ‘pushed by history’ (‘Beginning in a City, 1948’, p. 78). The sequence of titles clearly evidences the route: ‘Hating a Place You Love’ leads to ‘Let the Sea Be My Road’ and then finally to ‘New Days Arriving’.

One poem which specifically addresses the actual Windrush is ‘Whitehall Goin Turn We Back’ from the collection’s final sequence, which reworks a well-known Windrush anecdote concerning a rumour that as the ship approached Tilbury a British war vessel began to trail it, intending to prevent the migrants from landing.[1] Berry’s speaker alternates tones of confusion and panic in relating this incident, but concludes with resignation: 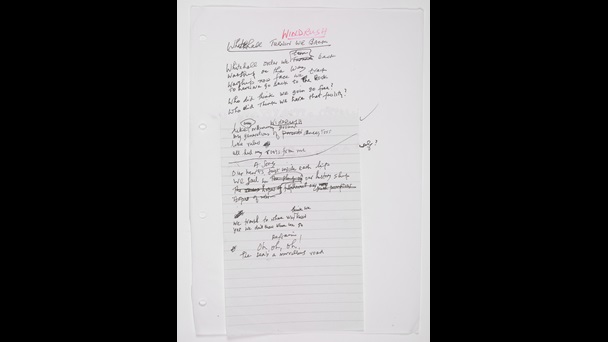 From the collection's final sequence, 'Whitehall Goin Turn We Back' specifically addresses the Empire Windrush.

The racist rejection suggested here aligns with what many Caribbean migrants did suffer in Britain – a particular kind of racist duplicity, invigorated by the discourses of imperialism. Despite the migrants’ loyalty to Britain and their newly conferred status as British nationals, to the British public they posed a threat to the old colonial order that structured itself on a strict hierarchy of racial geographies: disenfranchised blacks in their colonial outposts with privileged whites at the imperial centre.

The final poems of Windrush Songs are written in the celebratory mode that is often present in Berry’s writing, emphasising both the pleasures and trials of migration. The arrival of the ship heralds an historical juncture, ‘a turned over book page’ (‘Hymn to New Day Arriving’, p. 80), while in ‘Beginning in A City, 1948’, the newly arrived migrant-speaker finds the labour exchange and concludes with optimism: ‘So I had begun – begun in London’ (p. 78).

Berry, who suffered from Alzheimer’s disease for the last years of his life, died in 2017, although he continued to write throughout. His life and work will be commemorated at a conference held at the British Library in October 2018.

[1] Winder gives a version of this anecdote: ‘Out at sea, a couple of Jamaican wireless operators set up their game of dominoes right outside the radio shack, so they could monitor the news. They heard that the Windrush was being shadowed by a warship, HMS Sheffield, which was under instructions to turn them back if they made any trouble’ (Winder, 2004, p. 338).