From sacred scriptures to the people’s Bible

The Bible as we know it today was shaped by events of the 15th and 16th centuries. Professor Alec Ryrie discusses the transformation of the Bible, looking at humanism, the reformation and key theological figures such as John Wycliffe and William Tyndale.

In the generation before the Reformation, two parallel changes – a technological and an intellectual revolution – changed what a ‘sacred text’ could be. The consequences are still with us.

The advent of printing in Europe

The first change was the invention of printing with moveable type by Johannes Gutenberg in the early 1450s. It ought to have been a dubious proposition: a technique requiring hefty capital investment and a string of skilled craftsmen in order to mass-produce an expensive commodity which was entirely useless to most people. In fact, it spread across Europe so quickly that by 1500 the nascent printing industry had already been through its first boom-and-bust cycle. Printing presses were soon being set up in peripheral European cities such as London (1475) and Edinburgh (1507). The backbone of the early printing industry was religious texts: books of hours, psalters, liturgical texts and, of course, Bibles.

Reconceptualising the Bible as one book

Medieval Christians had revered the Holy Scriptures, but had little access to them. They generally saw them as plural Scriptures rather than a single Bible. Manuscripts of the whole Bible were a rarity: they were physically huge and very expensive. Individual books of the Bible, or sets of books, were the norm. Print not only made many more copies of the Scriptures available, it helped to redefine them as one book: the Bible, bound between one set of covers. God’s truth was now encapsulated in what (to those unfamiliar with books) looked like a box of treasures which anyone might open. By the early 16th century it began to seem that ‘the Bible’ was a single thing, which could speak God’s truth with one voice and, potentially, be a yardstick against which the Church could be measured.

The influence of humanism

The urge to use the Bible that way arose from the ‘Christian humanism’ (distinct from modern secular humanism) of the Renaissance. Humanism was a scholarly movement founded on the rediscovery of ancient languages and texts, and which took those texts as models for renewing European society. The humanists’ ambition, as expressed in works such as Thomas More’s Utopia, was to bring a piety of ethics and inner simplicity to a culture that they feared was encrusted with superstition and empty ritual. Their motto was ad fontes, 'back to the sources'. 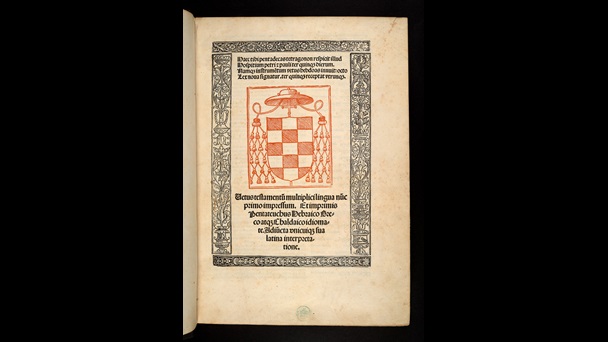 That meant a return to the Bible, a subject where print opened up vast new opportunities. The age’s premier biblical project was the vast Complutensian Polyglot Bible, a six-volume, multi-lingual parallel text edition which included the first ever printed New Testament in the original Greek. Its thunder was stolen, however, by that canny scholarly self-publicist, Erasmus of Rotterdam, who rushed his own Greek edition of the New Testament into publication in 1516, when the Complutensian pages were still warehoused awaiting the completion of the final volumes. Alongside the Greek text, however, Erasmus added two new elements: first, a fresh translation of the whole New Testament into Latin, which questioned many time-honoured interpretations of the sacred text; and second, a preface calling for the Bible to be translated into every language so that ‘even the lowliest women’ could read it. He urged Christians to take the text into their own hands and hearts, and become their own theologians. 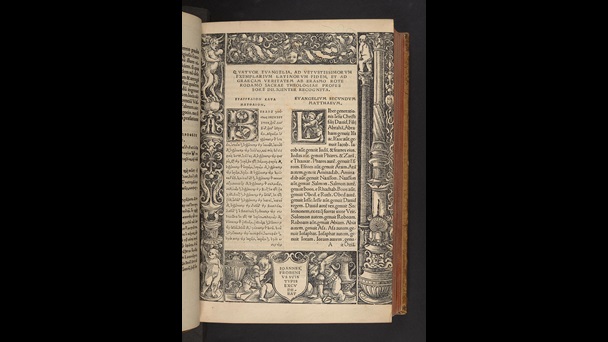 Erasmus’s Latin translation of the New Testament, divided into two parts. The first part has two parallel columns with the Greek and Latin texts next to each other while the second part contains a commentary and alternative suggestions for translations of certain words or phrases.

Luther and the Reformation

Erasmus was not to know that a year after the first edition of his New Testament, a German friar named Martin Luther would fall into a public quarrel about questionable fundraising practices, and that this would eventually escalate into the crisis and schism that we call the Protestant Reformation. Luther owed a good deal to humanism, and many of his early supporters assumed that he was simply another one of that brotherhood, but it quickly became clear that his ambitions went much further: he wanted to fundamentally rebuild the Church and its teachings. 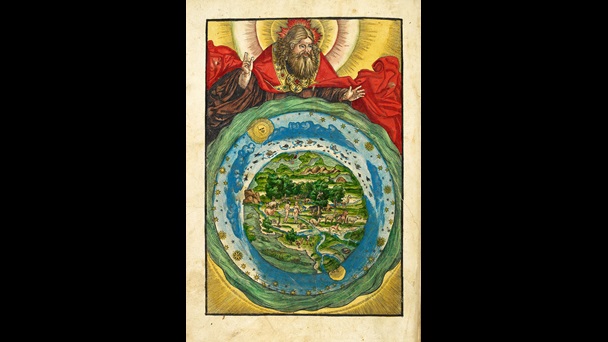 Luther’s translation of the Bible into German was not the first one to be published in Germany, but it was by far the most influential.

Yet for Luther, too, the Bible was decisive. As a professor in the early 1510s, he had used a ‘naked Bible’ for teaching: a Bible which only included the sacred text itself, shorn of the array of marginal glosses and comment that usually guided medieval scholars. As his confrontation with the Church’s hierarchy gathered pace, he found a slogan: sola Scriptura, 'Scripture alone'. God’s Word was the master of his conscience, he said, and was the only authority he acknowledged. In hiding in 1521–22 , he decided to make good on these stirring claims by making a translation of his own, not into Latin, now, but into German. The Luther Bible became not only the foundation text of the German Reformation, but also the foundation text of the modern German language.

There was only one European country that banned biblical translation outright: England. That prohibition was provoked by a small but persistent dissident movement called the Lollards, who drew their inspiration from the radical 14th-century theologian John Wycliffe. Wycliffe had called for an English translation of the Bible, and after his death his disciples had produced one: Lollards continued to treasure copies of it, and owning one could be enough to condemn a suspect for heresy. In 1523, an idealistic humanist named William Tyndale approached the bishop of London, himself a humanist scholar and a friend of Erasmus’s, to ask if in this brave new age he would rescind the ban and sponsor an English New Testament. The bishop refused, whereupon Tyndale took his project into exile, and in 1525 set about trying to have it printed in Cologne. The project was interrupted after only some of the text had been printed – early printing presses were substantial machines, and not easily concealed – but Tyndale moved 200 kilometres up the River Rhine to Worms, a Lutheran city. The first complete, printed English New Testament was produced there in 1526: it would become the most influential text in the history of the English language. Putting the Bible in the common people’s language and in their hands set in motion a momentous and permanent shift of religious power away from the Church and university elites. 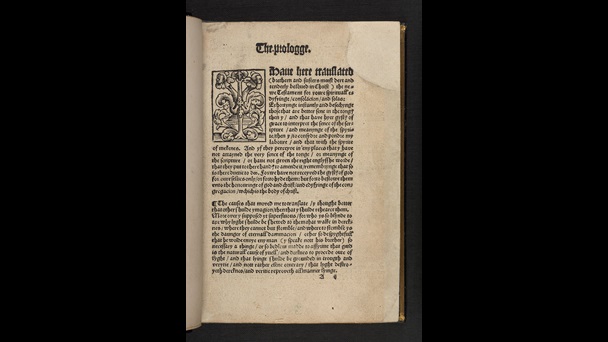 The only known fragment of the 1525 edition of the New Testament translated into English by Tyndale. 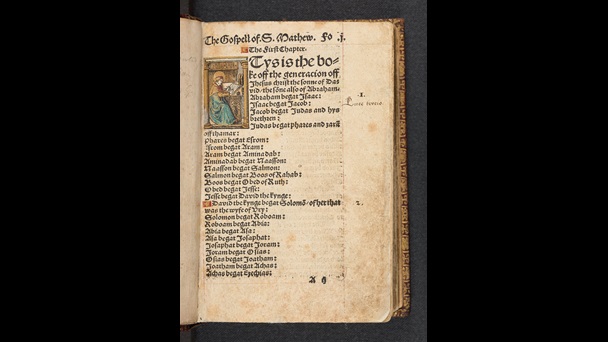 One of only three known copies of the 1526 edition of the illegal Tyndale translation of the New Testament, printed in Worms, Germany.

Even so, the ban on English Bibles stood, and Tyndale’s New Testament was illegal. Hence its size: it was designed to be smuggled and concealed. When Henry VIII’s quarrel with the Pope about his desire to annul his first marriage spread into a wider attack on England’s traditional religion, Tyndale’s public opposition to the king’s matrimonial adventures ensured that he and his biblical translations remained banned.

Other English Protestants, however, were more pragmatic. The chance to produce a legal English Bible – the central ambition of the Protestant reformers – was worth almost any compromise. The first full Bible in English was produced in 1535, the year after Henry VIII’s final and definitive rejection of papal authority. It drew on Tyndale’s work without mentioning his dangerous name, although its text of the Old Testament was so chaotic as to be almost unusable. This Bible was no clandestine piece of contraband: it was a full-folio size lectern Bible, bidding for official status. Witness its title page, which as well as illustrating the narratives of the Old and New Testaments, also depicted an English king seated above the English royal arms, distributing the book to his kneeling lords and bishops – as the reformers prayed he would. The first complete Bible in English, translated by Miles Coverdale. The titlepage depicts King Henry VIII as ‘Defender of the Faith’, a powerful Reformation monarch.

The king was interested. The Bible had persuaded him that he was God’s chosen instrument to lead the English Church, and he had a touching faith that if his subjects read it, they would reach the same conclusion. A new version was produced under the pseudonym Thomas Matthew in 1537. It appeared under royal licence, and the king allowed it to be distributed to parish churches not realising, apparently, that it was virtually unchanged from Tyndale’s version. That trick was too delicate to last, however, and only one edition was printed. 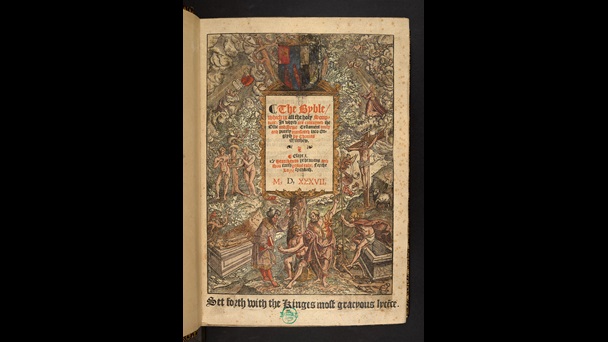 A 1537 copy of ‘Matthew’s Bible’, printed in Antwerp. On its titlepage the new Bible claimed to have been translated by ‘Thomas Matthew’, a name made up from the names of two of Christ’s disciples.

It was a lightly revised text that was made fully official and eventually printed in 1539. By 1541 there were enough copies for all 9,000 of England’s parishes to comply with the order to buy it. On the title page of this ‘Great Bible’ (a reference to its physical size) Jesus Christ is still there, but only squeezed in at the top. The dominant figure this time is the king, now unmistakably Henry VIII himself, distributing his biblical largesse to his grateful people, who obediently receive it. Instead of discussing it or even reading it, they simply cry Vivat Rex, ‘God save the king’. This was Henry VIII’s fantasy of his country. Henry VIII’s Great Bible (so-called because of its size). The title page, in particular, is a visual message about Henry VIII’s role as the Supreme Head of the Church.

Protestant England and the Book of Common Prayer

In fact, Henry VIII had set in motion forces that he could not control. When he died, his awkward half-Reformation was brought fully into the Protestant world by the regents of his young son King Edward VI. Archbishop Thomas Cranmer, who had written a preface to the ‘Great Bible’, now oversaw the creation of the English Reformation’s other enduring masterpiece. The Book of Common Prayer, the first edition of which appeared in 1549, was a new order of worship designed to lead a reluctant nation to its Reformation. It packaged the radical doctrines of the Reformation in a soothingly traditional form. 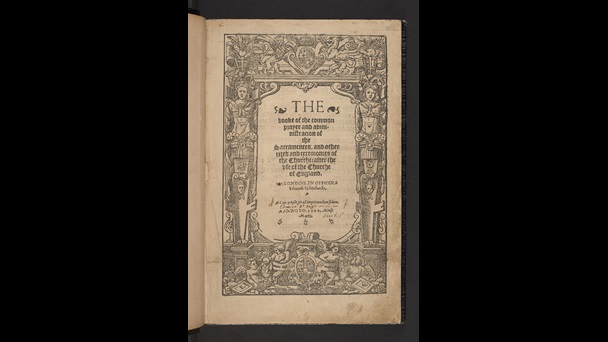 The first English Book of Common Prayer, published in 1549.

It worked, at least in part. In its revised, 1559 version, promulgated by Queen Elizabeth I, it became the rhythm of daily worship for all of England, and then beyond. However, Protestant purists soon became impatient with its compromises and pressed for further changes. In the era of the English Civil War in the 1640s, the Prayer Book was actually banned. By then, Cranmer might have agreed with the purists. But he had done his work too well. The daily repetition of his sonorous prose had deeply imprinted the Prayer Book onto the language and the nation. After the monarchy was restored in 1660 the Prayer Book came back too. It, and its successors, continue to be used in Anglican churches around the world today.