Sudipto Mitra writes about the essays of Kailashbashini Debi, its place in mid nineteenth century Kolkata publishing, and her literary development and views on female education and child marriage.

Kailashbashini Debi’s Hindu Mahilagoner Heenabastha (Hindu Females, in English) is considered to be the first ever collection of essays by a Bengali woman which came to be published in the form of a full-length book. Even though Bamasundari Debi’s Ki Ki Kushangskar Tirohita Hoile Edesher Shreebriddhi Hoite Pare (The List of Superstitions that have to be Removed for the Progress of this Country) predates the publication of Kailashbashini’s work by two years, scholars have often questioned the former’s status as a full-length book as its word count does not exceed two thousand and five hundred.[1] The two works are however in the same vein, and Kailashbashini herself acknowledges Bamasundari’s work as pioneering, and her main source of inspiration.

Hindu Mahilagoner Heenabastha was printed at Gupta Press, and distributed by the Gupta Brothers’ publishing house, located on 86 College Street. Kailashbashini’s husband Durga Charan Gupta co-founded this publishing house in 1861, along with his brother Satya Charan. and started an annual ‘swachitra full-panjika’ (illustrated full-length almanac) as the flagship publication. [2]

Even though the panjika reached a hundred thousand households during the course of the nineteenth century, the early days of the enterprise was quite modest.[3] An advertisement published in the 12 November 1863-edition of the Bengali periodical Somprakash reveals how they initially lacked any distinct identity in terms of the kinds of books published, and would readily print any items from personal letters to bank cheques.[4] Kailashbashini’s book was published during this time; which, arguably, is a statement on the amount of faith the publisher had on the author. 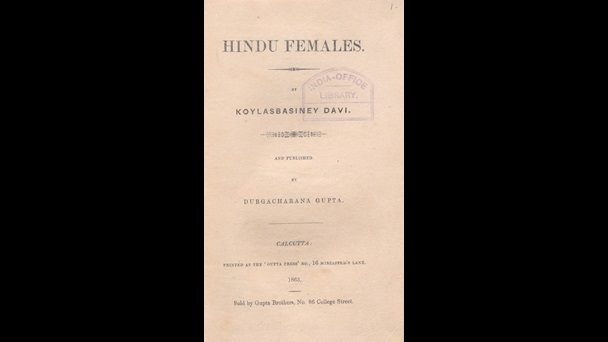 Even by Durga Charan’s maverick standards[5] the initiative was quite courageous, and, as            evident from Ananda Chandra Vedantabagish’s brief note at the beginning of the book, ran the      risk of arousing among readers a prejudiced suspicion that the text might have actually been          ghostwritten by Durga Charan for his wife.
Indeed, as Kailashbashini herself notes, education for women was still a taboo in Bengali              society; and that literate women would be widowed soon after their marriage was a common          belief. As a result, until her marriage, the author not only remained illiterate but was also                averse to the idea of women’s education in general. On the other hand, Durga Charan, from          his time at Hindoo College, and interactions with members of the Brahmo Samaj, had                    presumably imbibed western ideals of liberty and believed that the prosperity of any conjugal          relationship depended as much on the mental development of the wife, as that of the                      husband[6]

Concealed from eyes of the elders in the family, he brought Kailashbashini various books, and in spite of her initial resistance, sought to familiarize her with Bengali alphabets. Eventually, Kailashbashini too reciprocated the interest, and would find time in the evenings after she’s completed her duties to read the books Durga Charan brought for her.

Apart from her acquired skills of reading and writing, Hindu Mahilagoner Heenabastha is also a testament to Kailashbashini’s independent consciousness, and a deeply critical understanding of her contemporary Bengali society.

It is arguably this independent consciousness which provoked her to specifically identify Bamasundari Debi’s essay on the eradication of superstitions as her guiding light, instead of the other works published by women before her, such as Hannah Catherine Mullens’ novel Phulmani o Karunar Bibaran (1852), or Krishnakamini Dasi’s collection of poems Chittabilashini (1856).

Her deeply critical understanding of Bengali society, which is even more surprisingly informed by a substantial amount of empirical knowledge, is also reflected in this book.

Kailashbashini’s vivid description of how a sense of inferiority is inculcated within the mind of the girl-child -- how her birth is considered inauspicious, how her parents and family members discriminate between her and her brothers, and how they deliberately keep her ignorant -- in the opening essays of the book, suggests that the problems not only affected the author at a societal level, but also at a personal level.

Her usage of the metaphor ‘caged bird’, in this regard, is also one of earliest, and might have influenced Rashsundari Debi to use and popularise the same in her own autobiography.[7] Further, her critical commentary on contemporary social practices such as Kulin polygamy, child marriage, widow remarriage and caste hierarchy also exhibit her all-round awareness. This discussion, even though divided across several essays, occupies the largest section of the book. However, a part of this criticism, especially that relating to the various practices of Kulin Brahmins and Kayasthas, is more from the perspective of an ‘outsider’ as she was herself married into a Baidya family.

The other area Kailashbashini focuses on is marriage and conjugal life. Here again, perhaps drawing from her own experiences, the author criticizes the treatment a married woman received at the house of her in-laws and suggested that the preferences of both the man and the woman must be considered before marriage.

Even though quite a few of Kailashbashini’s ideas had been voiced by people before her, [8] her distinction remained in the fact that she was one of the earliest women to advocate them, publicly. Hindu Mahilaganer Heenabastha, in spite of its certain radical ideas, wasn’t altogether rejected by the contemporary Bengali readership. A long review of the book came out in the Bamabodhini Patrika, soon after its publication,[9] and Kailashbashini continued to write at least two more books called Hindu Abalakuler Vidyabhyash O Tahar Samunnoti, and Biswashobha.

I would like to acknowledge the contribution of Professor Gautam Bhadra, who provided some valuable pieces of information.

[5] Durga Charan was a man with many talents. He was an inventor among other things, and in 1882, invented an improvised threshing machine in which only 3 people could thresh as much riche as 24 people on other machines. See: Advertisement of the machine reprinted in: Paul, Adi Panjika Darpan, 50- 51.