Is there any literary enterprise as daunting, monumental and frustrating as dictionary-making? One looks at the pioneers of dictionary-making in modern India with awe, but one’s attention is arrested by the unlikely figure of Ram Kamal Sen, who spent 15 years of his life in the first decades of the 19th century researching a two-volume English-Bengali dictionary containing 60,000 words.

Why unlikely? The coming of print to Bengal saw a large number of dictionaries and lexicons hitting the market, but most of them compiled by administrators or missionaries, such as Foster, Miller, Lavandier, Haughton, and the indefatigable William Carey and Joshua Marshman. Indians such as Tarachanda Chakrabarti and Jagannath Mullick also chipped in. But these were mostly modest affairs.

While these competed for the orders of East India Company officials, Ram Kamal’s work was in the making. Born in 1791, Ramkamal worked first at the Asiatic Society and then as a compositor at the Hindoostanee Press at a monthly salary of Rs 8. From these humble beginnings, he rose to be the Dewan of the Bank of Bengal at a salary of Rs 200 per month, in 1832. 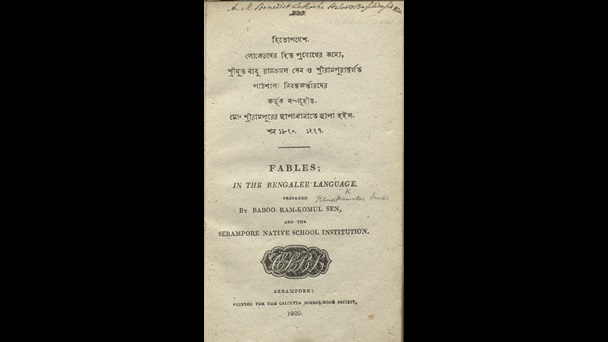 Ramkamal’s association with a host of societies, such as the Asiatic Society, the Agri-Horticultural Society, and the ultra-conservative Gaudiya Samaj, is well documented. But his dictionary-making seems to have been a lifelong preoccupation. From his preface to the dictionary we learn that it was ready to be sent to the press as early as in 1817, but ‘but various circumstances conspired to retard its execution’. Put simply, the money raised for project did not turn out to be enough and printing came to a halt after 116 pages.

The press would not carry out the further work and Ram Kamal had to buy the printed sheets from the press. At this point, the Serampore Press came to his aid, and promised to fund and print the remainder of the work.

But the paper and type used by the Serampore missionaries bore no resemblance to those used by the Calcutta printers: ‘The proprietors of the Serampore Press offered to prepare a smaller fount, and by redoubled exertion to make up the loss of time substituting their better manufactured paper for Patna paper, if I would cancel the pages already printed; by this offer of assistance and improvement both in the type and the paper, I was induced to accept the proposal.’

End of trouble? Not quite. A new edition of Samuel Johnson’s dictionary had reached Indian shores, and Sen was prevailed upon to revise some parts. Then, Felix Carey, who was personally supervising the work, died; other mission work took precedence over the stop-start dictionary and it was consigned to the back burner.

After William Ward returned to the mission field from London, work on the dictionary resumed, but then, he too died. ‘After a great deal of trouble and delay, however I got 350 pages printed (in nine years) when I found the colour of the paper changed and the words hardly legible, the types used being greatly worn. Mr Marshman moreover could not print any more on that paper and with those types, under the fear of bringing discredit to the press.’

Redo from start? Ramkamal was reluctant, and his health was also failing. Nevertheless, he decided to soldier on in public interest and first volume, containing 542 pages, was completed in fourteen months, and the second, comprising 560 pages, in two years; a total of 1,102 pages, containing about 60,000 words, completed in 17 years in 1834.

Towards the end of his preface, Ramkamal could not resist a dig at those lexicographers who were working on government-funded projects: ‘The authors of these volumes being thus countenanced by Government to regulate and expedite the progress of their works, they set up or bought printing presses at which they printed their works. Nevertheless even those gentlemen…have not finished their volumes in less than from seven to twenty years.’