A Passion for Print: Autobiography of a Well-known Proofreader

The first printing press known as Cuttack Mission Press in Odisha was set up by Missionaries in 1836. However, printed books were already in circulation in Odisha before the establishment of this press. An Odia translation of a portion of the Bible had been printed at Carey’s press at Serampore in 1807 and more translations of the Bible into Odia followed. Cuttack Mission Press printed and distributed not only religious books; it also undertook the printing of textbooks in Odia.

But, as Gobinda Ratha complains in 1877 in a poem titled “Cuttack Darshan’’, it would not print holy books written in Odia. In the fullness of time, however, members of the emerging western-educated Odia middleclass set themselves up as printers and publishers.

The first printing press owned by Odisa, Cuttack Printing Company, came to be established in 1866. It brought out a weekly newspaper, printed medieval Odia literary texts which were hitherto available only in the form of palm leaf manuscripts, and almanacs in Odia. These initiatives proved financially very profitable and the owners became socially influential figures.

The advent of printing technology in a world hitherto dominated by scribal production of texts led to the creation of new types of jobs. The printing press needed compositors, machine operators, block makers and proofreaders, and type foundry workers.

Catalogue of books registered in the Province of Bihar and Orissa 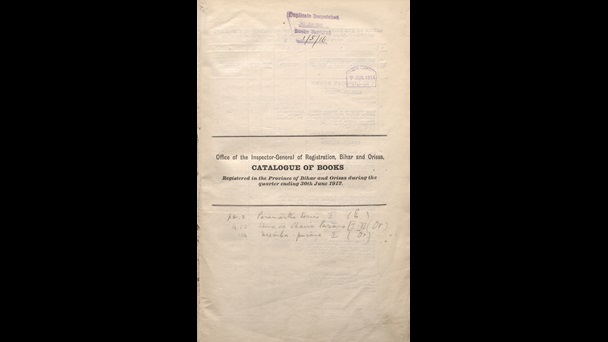 Proofreading skills assumed special significance in the context of the expanding market for school textbooks. Several schools and a degree college came to be established after the horrible famine that had devastated Odisha in 1866. Textbooks meant for the use of school children and young students were naturally expected to be error-free and publishers who made a lot of money by publishing textbooks looked for expert and reliable proofreaders.

Palm leaf manuscripts which, as Dr Mayadhar Mansingh evocatively puts it, carried for long the ‘aroma of sanctity’ for Odia readers, now came to be considered full of errors by readers exposed to the benefits of printing technology.

In fact, in an article published in the journal Utkal Sahitya in 1901, the author playfully suggests that a certain important word in the Bhagabata authored by Sage Vyasadeva would have been spelt correctly had the text been gone through by a professional proofreader.

Now that the new Company was run by a non-Christian, Brahmins overcame their resistance to print and arrived at the press carrying palm-leaf manuscripts hoping that these would be instantly transformed into printed books if placed on the printing machine. Goddess Saraswati, who was considered partial to the palm leaf , finally chose to descend onto paper.

Published in 1991 by Grantha Mandir, Cuttack, the autobiography of  Krushna Chandra Kar (1906-1995),  titled  Hajila Dinara Smruti (Memories  of a Lost Time), provides fascinating glimpses of a world transformed in many significant ways by the emergence of a vibrant print culture.

Born in a village, which was not far from Cuttack, Kar went to a teacher training school in the city with the aim of earning his livelihood as a school teacher. But his mother’s reluctance to let him serve in a far-off place made him decide to look for a job in a publishing establishment in Cuttack. He says that he was possessed of  extra-ordinarily good eyesight and remembers how an astrologer had predicted that  his eyesight would never fail him and he would enjoy robust health all his life.

In 1925, he joined as Manager of Cuttack Trading Company, which was earning a huge profit from publishing textbooks and dictionaries. His salary was 25 rupees. Around this time, Macmillian was exercising an almost unrivalled monopoly over the textbook market in Odisha.

A relation of Krushnachandra, Balakrushna Kar, who later achieved considerable fame as an editor and publisher, sought to challenge Macmillan’s monopoly and published two textbooks with the help of  Krishna Chandra. These were approved by the Director of Public Instruction and effectively brought Macmillan’s monopoly over the textbook market to an end.

Krushnachandra left Cuttack Trading Company and joined the establishment set up by Balkrushna Kar. Soon, however, he fell out with Balakrushna Kar and resigned.  Nababharat Press, founded by the famous scholar-politician Nilakantha Das, where a large number of school textbooks were printed by Cuttack Trading Company, was looking for an expert proofreader and Krushnachandra was readily hired.

Here he performed his duties with such sincerity and skill that his fame as a proofreader spread to Berhampur, which was part of Madras Presidency at the time. While working at Nababharat Press, Krushnachandra endeared himself to Nilakantha Das, who was engaged in reforming the Odia script, a source of considerable difficulty and confusion to the compositors on account of its shape and its numerous compound letters.

Das often sought Krushnachandra’s expert advice on ways of reforming Odia script. The latter thought deeply and hard about the difficulties presented by the Odia script to the printer but advised against introducing radical changes, for he thought these might make matters worse.

After his stint in the Nababharata Press Krushnachandra joined the newly founded government press. Here, he corrected two wrongly spelt words in a confidential note written by the chief secretary, Mr. Mansfield and earned his appreciation. The words in question were: budgeting, benefiting and they had an additional ‘t’ in them, which Krushnachandra removed. In recognition of his admirable ability as a proofreader Mansfield immediately promoted him to the position of overseer of the government press.

When the government of Odisha nationalised textbooks after independence, thereby destroying the monopoly over this highly profitable business of private publishers, Krushnachandra meticulously proofread all the textbooks published under the auspices of the government. Before this he had also assisted Gopal Chandra Praharaj in publishing the monumental, error-free dictionary, Purnachandra Odia Bhasakosh.

However, it would be wrong to present Krushnachandra Kar only as an accomplished proof reader because he is many more things besides. He wrote children’s books, textbooks, and is the author of a bestselling dictionary.

But his autobiography, perhaps the only of its kind, gives a vivid account of his life as a proof reader. He is someone who immersed himself in the evolving print culture and is an eloquent witness to the changes transforming book publishing in Odisha between the two world wars. His anecdotes illuminate aspects of print culture which no academic treatise possibly can.