Against the Certified Art of Drinking: Two Nineteenth Century Tracts on Alcoholism in Bengal

Sujaan Mukherjee examines two rare tracts on alcoholism in Bengal, illustrating the tactics employed by the authors to discourage such 'shameful behaviour'.

“A few years before he assumed the throne, King Henry V had fallen into bad company. Among his friends was one Sir John Falstaff, who misled the Prince to commit many an embarrassing act. This is described in detail in Shakespeare's verses” (Ghosh, 6).

Harachandra Ghosh, the author of these lines, goes on to list the items on the receipt Peto found inside Falstaff’s pockets. Harachandra’s horror at the disproportionate amount of sack the knight presumably consumes is no less than Hal’s own: “O monstrous! but one half-penny-worth of bread to/ this intolerable deal of sack!” (1Henry IV 2.5.492-3). It was wise of the Prince, Harachandra remarks, to waste no time in getting rid of such friends; how else could he hope to prosper?

It was later published and much later compiled by an unknown binder in a volume, which also contains a similar tract, Gopal Chandra Bandyopadhyay’s Madaksebaner abaidhata o anishtakarita bishayak prabandha or a Discourse in Bengali on the Impropriety and Injuriousness of the Use of Intoxicating Drugs and Drinks (August 1865). The volume, presently in the collections of the British Library, is an important marker of the western-educated Bengali’s reaction to alcoholism in nineteenth century Bengal. 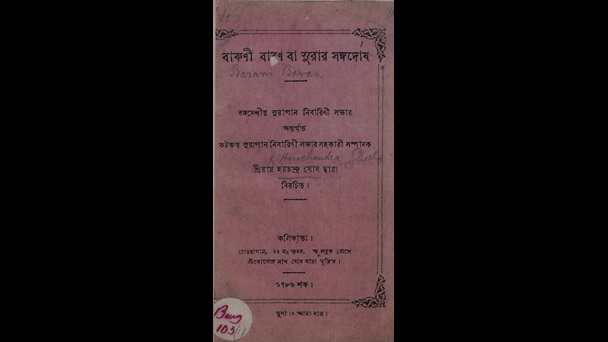 Harachandra Ghosh (1817-1884) was a student of the first batch of Hooghly Mohsin College (one of the earliest district colleges in colonial Bengal, established in 1836), and he is recognized as one of the first dramatists in Bangla literature. The reference to Sir John Falstaff comes as no surprise because he was also one of the earliest notable translators of Shakespeare into Bangla, translating The Merchant of Venice as Bhanumati-chittavilas in 1853, and Romeo and Juliet as Charumukh-chittahara in 1864. Gopal Chandra Bandyopadhyay, however, proves to be an elusive figure.

The latter half of the nineteenth century saw the rise of institutional opposition to drinking, to go with the many literary satires such as Peary Chand Mitra’s Alaler ghare dulal (1857) and Kaliprasanna Sinha’s Hutom pyachar naksha (1862) that highlighted the evils of drinking. This was a response to the perceived threat of destabilization of the bhadralok society (masc. genteel, urban gentrified) posed by groups such as the Young Bengal, who projected themselves as radical, free-thinking and generally subversive.

Contemporary commentators and social thinkers, many of whom belonged to the Brahmo Samaj, wrote alarmed pamphlets castigating the youth for their unseemly behaviour. They formed societies such as the Surapan nibarani sabha (1861), founded by Rajnarayan Basu in Midnapur, and Pyaricharan Sarkar’s Bangiya madak nibarani sabha (1863) [The Bengal Temperance Society], or later The Band of Hope, founded by Keshub Chandra Sen.

The persuasion strategies adopted by the two essays presented in the volume share similarities. There is the standard vivid description of the drunkard lying by the wayside, being licked, even bitten by dogs. There are anecdotes, unintentionally comical, to suggest what the authors consider shameful behaviour. For instance, Harachandra narrates the story of a landowner in the Rajshahi district of Bengal who hires a resident expert from Dhaka to train him in the art of drinking. When questioned about his experience, the teacher replies, “My lord, but of course! I have been learning the art since I was fifteen and now I am forty. Look at all my certificates” (Ghosh, 24-25).

Lines such as “There is no sin in eating meat, in (drinking) spirituous liquor, and in carnal intercourse, for that is the natural way of created beings, but abstention brings great rewards” (Manu 5.56) is read by Gopal Chandra as permission to indulge in such matters only upon medical advice. But even as medicine, they warn time and again, use must be judicious because getting addicted to such intoxicants is deceptively simple.

The tracts occasionally make use of on quasi-scientific arguments, but the liveliest sections are the stories they tell. By far the most significant among these, spanning forty pages in a sixty-eight page discourse, is the parable Harachandra relates of how Sura, the female embodiment of alcohol, entered the temporal domain. The sudden change in tone and mood in his lecture is reminiscent of Plato’s parable in Phaedrus, and this may be self-conscious, as towards the end of the tract Harachandra shows his awareness of the ancient Greeks by alluding to the Stoic philosophers, in particular Zeno, as an example of one who showed supreme command over his bodily existence.

The story goes that Sura had approached Yama, the Lord of Death, seeking entry into the world. Accompanied by Yama’s offspring, Paap (Sin), Santap (Grief), and led by Lobh (Greed), Sura makes her way. They encounter a group of peasants but Sura does not wish to make her first entry through a “lowly” house. Soon after they come to the gates of a mighty palace belonging to the impeccable Brahmin prince, Rajarshi.

The gates of the palace are guarded by the Dharma (the Right Way), Satya (Truth), Jai (Victory) and Vinay (Humility), the offspring of Jnan (Knowledge) and Vidya (Learning). After the minions of the underworld are turned away, they seek help from Kali, the demonized arch-enemy of Kalki, the last avatar of Vishnu. Kali tells them that since Sura had spurned the poor, she will have to be reborn in just such a house, but that Kali himself would stay with them on Earth to help them enter the temporal sphere.


This marks the departure of Jnan and Vidya from the court of Rajarshi, who in turn decides to exile himself. His sons fall to the lure of Sura and Barangana (usually associated with female sexual profligacy) and die at the hands of the Vyadhi (Diseases) they had brought with them. Sura dies of grief (suddenly shedding her seductive subversive powers and assuming the role of a ‘good Hindu wife’) and is reborn into the house of a Suri--a Hindu caste, traditionally alcohol-sellers.

The parable tells not just the story of the arrival of vices including alcohol, but ties it up with the harkening in of the final age in the Hindu cycles of time, the Kali-yuga, a time of total chaos when the established order (including caste, gender and social hierarchies) will be overturned. The widespread consumption of alcohol was often correlated with the arrival and rise of English education. Interestingly, in these texts both written by English-educated individuals, often alluding to Shakespeare and Francis Bacon, the tirade is not directed against Western education generally.

It is rather that the two--Western learning and manners, and alcoholism--need not always go together. They fear that the association of Western education with alcohol can in fact turn people away from something valuable. Although Harachandra offers greater diversity in terms of approaching the subject, Gopal Chandra’s lecture tries to offer practical solutions--such as prompting the British rulers of India to ban the sale of alcohol, a product associated with high taxes--and ends with a poetic exhortation to his audience to not only abstain, but also to campaign actively to put an end to alcoholism in Bengal.

My thanks to Prof. Swapan Chakravorty and Sarbajit Mitra for pointing me in the direction of some key texts.