Child Marriage Is Not Right: Revisiting A Public Debate in 1863 Calcutta

Sarbajaya Bhattacharya reflects on a popular nineteenth century work exposing the motives behind progressive attitudes towards education and marriage in India.

The social climate of nineteenth century Bengal was abuzz with different voices debating social and legal reforms which mainly dealt with the condition of the woman. The category itself was quite exclusive, referring particularly to high class, high caste, and usually Hindu or Brahmo women. Should she be burned on the pyre with her dead husband? Should a widow be allowed to remarry? Should a woman have access to education? Should she cross the threshold of her home? When should a woman be married?

These questions were being fiercely debated and discussed not just in the more sombre periodicals and meetings, but also in contemporary popular literature. Khirod Gopal Mitra's Bālyabibāha Uchit Noy (Child Marriage Is Not Right), published from Calcutta in 1863 sounds like a modern day 'listicle' enumerating the reasons why child marriage is bad for society. It is, in fact, a dialogue between two men - Nidhiram and Bidhiram, whose conversation, often in rhyming couplets, touches upon contemporary issues while they discuss the future marriage of Bidhiram's son.

Nidhiram is a teacher at a traditional school or tol. Bidhiram has come to him to seek advice. His youngest son has gone astray. Bidhiram, following the fashion of the age, had enrolled the boy in an 'English' school, invested his money and his wife's jewellery for the boy's education. Crushing his hopes of upward mobility and social prestige that an English education would bring, his son seems to have developed no interest to climb up the social ladder. Bidhiram's solution to this problem is to get the boy married. A wife, he feels, will turn the boy around and make a family man out of him.

But Nidhiram, armed with more experience and intelligence, discourages his friend from following such a path. He has his own set of reservations against Western education and his share of complaints against the youth of the day. His own son Kapingal, he narrates ruefully, had taken to alcohol and frequenting brothels. Such pursuits demanded money, and the constant need of money had made a thief out of Kapingal who ended up stealing his father's scriptures and selling them at a lower price. The shame that Kapingal brought to his name made Nidhiram more cautious regarding his second son. Education, Nidhiram has concluded, is the key to solving such problems. Early marriage distracts from the path of education, therefore it is not advisable. 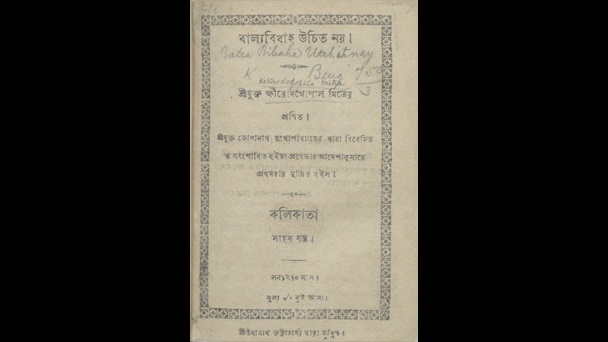 Bidhiram initially seems nonchalant about child marriage, looking upon it only as a way to 'reform' his wayward son. His stand on social reforms remain quite vague in the pages that have survived. Nidhiram manages to convince him and make him understand that his son has not gone astray because he doesn't have a wife. The real reason behind his son's waywardness is the company he keeps. A child bride will not solve the problem, because she is not the cause of the problem to begin with. It is unclear, from the pages available, whether Nidhiram is fundamentally opposed to the idea of child marriage, or whether it is specific to this situation.

The idea of improving the condition of women in the nineteenth century came not from some feminist demand of equal rights for women. It was, for the most part, still deeply embedded in patriarchy, and was an attempt on the part of the men to present themselves as liberal and progressive, as opposed to 'backward' and 'savage' -epithets often conferred upon them by the colonial masters in their attempt to justify colonial rule. Burning a woman alive on her dead husband's pyre was backward. It had to go. Marrying five year old girls to tottering men of ninety and then starving her and taking away her future when she became a widow was backward. It had to be stopped. Furthermore, the young widow was considered to be a sexually volatile element who could easily upset the traditional structure of the family and/or bring 'shame' to the family name.

It was for the sake of the family, went the argument, that young widows be allowed to remarry in order to contain their sexual appetite. The new young men wanted wives who could read their Bankim and cook a hearty meal, so it became necessary  to introduce her to some literature alongside her training in household management. The abolition of widow immolation, the advocacy for widow remarriage, the battle against child marriage, women's access to education - every single one of these reforms (which, despite the critique just advanced had far-reaching and extremely important effects) met with opposition, especially from the orthodox Hindu community of Bengal, who would, in 1891, protest against the Age of Consent Bill that ruled that the age of consent for all girls irrespective of marital status was twelve.


Nidhiram, a Sanskrit pundit, the master of a tol, is the kind of man the orthodox Hindu would identify with. For the lack of the author's own words, we may assume that Nidhiram's indictment of child marriage is meant for that particular readership. His complaints against the youth, his status as a teacher in a traditional school, his strong sense of morality regarding alcohol and brothels makes him and his words more acceptable. He is like us, the orthodox Hindus think, and he thinks child marriage is bad. There must be something in it then, they think, their minds filled with thoughts of how to make life more miserable for women. Nidhiram may not be the most progressive of men, but in a country where child marriage remains rampant in the twenty first century, his nineteenth century ideas were at least a step in the path of prevention.