The caption on the cover page verso of Saralā gives us limited information about both translation and translator. Nirmalabala Shome produced the translation and had it published from Bhowanipore, Calcutta in February 1914. Shome was not a well-known figure however, from the little information available we can learn that she was an educated Christian Bengali woman; a student at the Bethune School who obtained her BA degree from the University of Calcutta and eventually an MA.[i] The Bethune School carries a special legacy for women’s education in India, being one of the first institutions established for the education of girls in colonial Bengal and helping pave the way for similar institutions to follow.[ii] The growth of girls’ schools led to an increase in the demand for female teachers, whose ranks Shome also joined. Unlike Bronte, who following a stint as a private governess and aborted attempt to open a school alongside her sisters, rejected teaching in favour of writing, Shome appears to have been successful as a teacher and was eventually appointed as examiner for English in the Entrance Examination of the Educational Service.[iii] Jane Eyre, a novel narrated in the first person by a young woman working as a governess and presented as an autobiography, has often led readers to sympathise and identify with its heroine and it is possible that Shome’s biographical similarities with Jane may account for her affinity with the novel as well.

As Priya Joshi points out in In Another Country: Colonialism, Culture, and the English Novel in India (2002), there was little financial compensation available for translators in the nineteenth century Indian translation industry. Translators had to be either ‘notably enthusiastic’ about a book or expect commercial success that would justify the expense and effort that would need to be undertaken to produce a translation. [iv]  In my opinion, Shome likely belonged to the first camp of ‘notably enthusiastic’ readers turned translators. In addition to the biographical similarities that Shome shared with both Brontë and Jane, she writes in her ‘Introduction’ to Saralā that reading Jane Eyre gave her a sense of great happiness that she wished to share by translating the text into Bengali.[v] 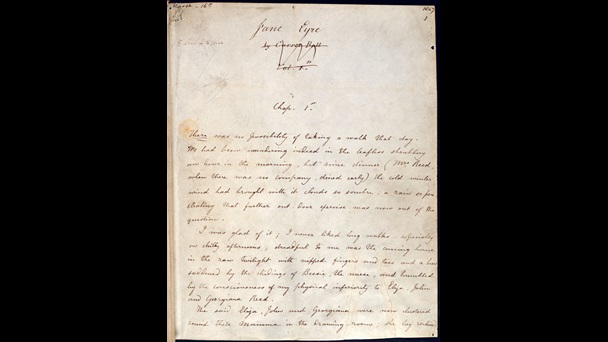 Shome begins her translation with an epigraph that does not exist in the original text: “faithful unto death”. Whilst the epigraph is uncited, we can assume it is drawn from the Scriptures: Jesus said, “Be faithful unto death and I will give you the crown of life” (Revelation 2:10). The epitaph fits the tale that follows even if it has been added voluntarily by Shome. Jane draws strength from her Christian faith throughout the novel and it is this spiritual strength that enables her to break from Rochester following the discovery of his first wife Bertha, a break that eventually leads Jane to be “rewarded” with a happy ending, including an inheritance from an unknown relative and reunion with Rochester following Bertha’s death. Jane is the exemplification of a heroine who is “faithful unto death” and in return is rewarded with the “crown of life” by the end of the novel.

It is difficult to gauge what reception Saralā received from contemporary readers upon publication in 1914. Certainly, we can take the fact that Shome acted as both translator and publisher as evidence that the translation made little traction with the publishing houses of the day. It does not appear that the translation has ever been reprinted or reissued, perhaps suggesting it had little traction with audiences either. This is arguably unsurprising given what is known about the colonial Indian public’s reading tastes. As Joshi points out, despite the colonial authorities’ desire to exploit the soft power of British literature and use the English novel as a way to propagate ‘Englishness’ amongst their Indian subjects, Indian readers largely rejected the “high” realist writers of the era in preference of low and middling brow English writers of the gothic, romance and adventure genres.[vi] Lesser-known Victorian writers including George W.M. Reynolds and Edward Bulwer-Lytton were most popular amongst Indian readers while the advertisements of the latest available book imports from England rarely mentioned the likes of Dickens, Thackeray, Eliot, the Brontës or Austen, signalling their relative lack of popularity.[vii] This lends credence to the hypothesis that Shome chose to translate Jane Eyre out of reasons of personal enthusiasm rather than expecting Saralā to be a significant commercial success – which all signs suggest it was not.

Yet Shome does take pains to bring the action of Jane Eyre closer to her Bengali audience. While she reproduces much of Brontë’s prose, Shome alters the characters and location of Jane Eyre by transporting them from Victorian Yorkshire to colonial Bengali. Characters are renamed and transformed: Jane becomes the eponymous Saralā, her childhood friend Helen Burns is Śrīlatā Basu and Edward Rochester is Śacīndrakumār Bandyopādhyāya in Shome’s version. Places are also renamed: Rochester’s imposing and isolated Gothic mansion home Thornfield Hall becomes বন কুটীর (Bana-kuṭīra). Bana-kuṭīra is a compound word in Bengali and its meaning is something close to ‘forest cottage’. While Bana-kuṭīra does not have exactly the same foreboding resonance as Thornfield Hall, it nonetheless conjures an image of a mysterious abode in the forest and also carries connotations of the supernatural and ‘elfish’ that Rochester associates with Jane in Brontë’s original text.[viii] 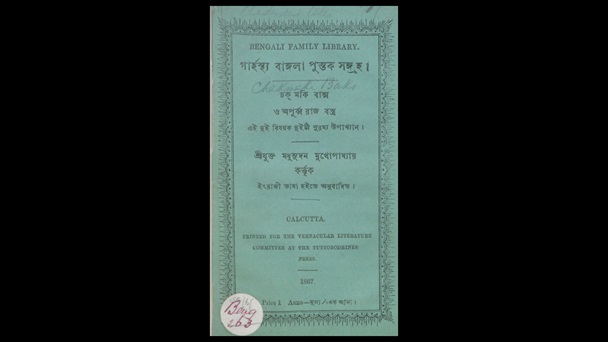 While some of Shome’s name changes might seem superficial, others have a deeper impact. In Brontë’s novel, the housekeeper of Thornfield Hall is addressed by everyone including Jane as Mrs. Fairfax. Yet in Saralā, the housekeeper urges Saralā to call her Māsīmā (meaning maternal aunt) upon first meeting her. While Mrs. Fairfax is friendly toward Jane in the original text, their closeness grows with time. In Saralā by contrast, where the housekeeper urges Saralā to use a familial maternal endearment to refer to her, their relationship is immediately more intimate than that between Jane and Mrs. Fairfax at the start of Jane’s employment at Thornfield Hall in Jane Eyre.

Saralā is a shorter text than Jane Eyre – numbering 188 pages to Jane Eyre’s 401.[ix] As Joshi points out, abridged translations were not uncommon in the nineteenth century and Saralā fits this trend. Less clear are the reasons why Shome chose to abridge Jane Eyre to the extent that she did and why she chose to abbreviate or forgo certain parts of Brontë’s original text whilst retaining others. Saralā faithfully represents Saralā’s childhood and education, as Brontë does Jane’s, yet Shome chooses to condense Saralā’s time in Bana-kuṭīra as well as her self-imposed exile from there and subsequent time spent with newly discovered cousins. In addition, while Shome retains the same autobiographical and intimate first person narrative voice used by Brontë, she sometimes forgoes the philosophical and detailed inner monologues that characterise Jane’s narration in Brontë’s original novel. We can compare for example the scene in both texts where Bertha (called Bārunī[x] in Saralā) sets fire to Rochester’s bed, leading to a night of concern and unrest. In Jane Eyre, Jane’s reaction is depicted thus:

I regained my couch, but never thought of sleep. Till morning dawning I was tossed on a buoyant but unquiet sea, where billows of trouble rolled under surges of joy. I thought sometimes I saw beyond its wild waters a shore, sweet as the hills of Beulah; and now and then a freshening gale, wakened by hope, bore my spirit triumphantly towards the bourne: but I could not reach it, even in fancy – a counteracting breeze flew off the land, and continually drove me back. Sense would resist delirium: judgement would warn passion. Too feverish to rest, I rose as soon as day dawned. (Jane Eyre, p. 133)

By contrast in Shome’s translation, Saralā’s narrated reaction is much simpler:

That night sleep did not return to me, many different thoughts came to take possession of my heart. At first my mind scaled beautiful heights, travelled to realms of happiness, but afterwards the shape was changed, my heart was gripped with anxiety and ill fortune. I thought, who is Bārunī? Where does she dwell? Perhaps now I would have the answer. What a wretched laugh! Hearing it one’s heart was struck. God! Was Bana-kuṭīra haunted? (Saralā, p. 76-7. My translation)

Both authors depict their heroines experiencing emotional turmoil between a joy that is just within reach and the misgivings that undercut this joy. Yet whereas Brontë illustrates Jane’s inner conflict largely through intangible metaphor, Shome quickly moves on from metaphor to address a series of tangible, practical questions. As modern readers, we can only guess as to Shome’s reasons for not representing Jane’s inner monologues in their entirety. One possible reason is that, given the popularity of gothic, romance and fantasy fiction over Victorian “high” realism amongst the Indian reading public of the time, Shome preferred to dispense with the more abstract elements of Brontë’s narration in order to focus on the action of the novel.

As contemporary scholars and researchers, Shome’s Saralā provides many potential insights into both the strategies employed by late nineteenth/early twentieth century Indian translators as well as colonial Indians’ engagement with Victorian British writers and their work.

[i] Jane Horowitz Murray and Myra Stark, The Englishwoman’s Review of Social and Industrial Questions: 1887

[iv] Priya Joshi, In Another Country: Colonialism, Culture, and the English Novel in India, p. 68.

[ix] Note: this blogpost refers to the 1999 edition of Jane Eyre published by Wordsworth Classics.

[x] Note that Shome’s renaming of Bertha Mason as Bāruṇī is indicative of the ‘angel-monster’ dichotomy  discussed by Sandra Gilbert and Susan Gubar’s in their iconic work of feminist scholarship on Brontë and others, The Mad Woman in the Attic (1979). Bāruṇī is a Bengali word for a sex-worker - its use has been documented in Bengali literature of the nineteenth century including Nabīnacandra Caṭṭopādhyāẏa’s Bāruṇī-Bilasa Nāṭaka (1867) or Harachandra Ghosh’s Bāruṇī bāraṇa bā surāra saṅgadosha (1864).

_______, In Another Country: Colonialism, Culture, and the English Novel in India, (New York, Columbia University Press, 2002)