Lives of Solon and Publicola

In this article, Amlan Das Gupta delves into Somnath Mukhopadhyay's translation and comparison of Plutarch's Lives of Solon and Publicola to reveal how these characters were used within Indian education.

[Printed at the Dhaka Bangla Press, samvat 1920 (1863) price 11 annas only. Gentlemen    desirous of collecting this book will find it if they enquire at Babu Shri Nandalal Guha's          shop at Islampur, Dhaka.]

Plutarch's lives of Solon and Publicola along with the comparison of the two (adapted from an unidentified English translation) are the somewhat unlikely choice of subject of this work by Somnath Mukhopadhyay (Mukherjee). These lives were customarily placed third in the traditional ordering, after those of Theseus and Romulus, and Lycurgus and Numa. Plutarch was of course by no means unknown among Indian readers and writers of the time: Phiroze Vasunia points out that Plutarch's Life of Alexander was well known among Indian writers and is mentioned in works written in many languages, largely because of the fact that it mentions Chandragupta Maurya who may while in his teens have seen the Greek conqueror. Greek and Roman history were regularly studied: as early as 1833 we find an abridged translation of Goldsmith's History of Greece published by K.M. Mukherjee, and this appears to be one of many such efforts. European classical languages and literature remained on the curriculum of Indian universities till the early 20th century, though Thomas Raleigh's 1902 report (Report on the Indian  Universities Commission)  complains about the  moribund state of the study of Greek and Latin in the Indian universities.

Lives of Solon and Publicola 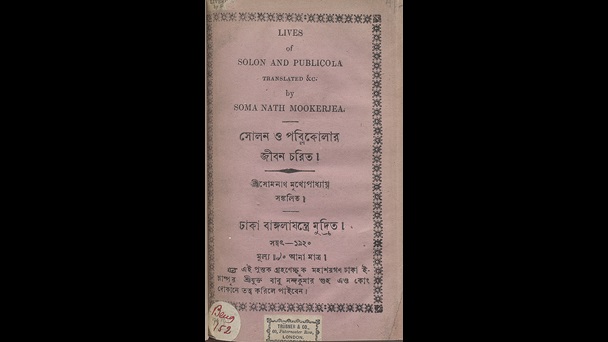 What appears worthy of note is the selection of this particular combination of lives, and even the figures themselves. Both were celebrated for their democratic zeal and political reforms; Solon is credited with having established the foundations of Athenian democracy, and Publicola with having fought against the monarchy and establishing the Roman republic. Although published just a few years after the 1857 uprising, it seems unlikely that the work was intended to convey any anti-imperialist messages.  As such, the purpose and intellectual frame of the present work appear to be quite distinct from the Hellenizing spirit of writers like Henry Louis Vivian Derozio and Michael Madhusudan Dutt, to say nothing of the small but prominent group of Bengali intellectuals who wrote enthusiastically about Greece and Rome in journals such as the bulletin of the Asiatic Society.

Somnath Mukhopadhyay was Headmaster of the Dhaka Normal School and in 1870 published a volume entitled Shiksha Paddhati (System of Education).  The Normal Schools, aimed at improving the quality of primary education, were set up in various parts of the subcontinent from the end of the 18th century. Carey and Marshman set up a Normal School in Serampore in 1793. Schools were set up in Kolkata in 1852, in Hooghly in 1856, and in Dhaka in 1857. Of course the end and aims of these schools were very different: some furthered the cause of missionary education, others were devoted to female education. However, as Parna Sengupta notes, Somnath Mukhopadhyay - like his better known contemporary in the Hooghly Normal School, Bhudeb Mukhopadhyay - was engaged in a project of reforming pedagogic practices, and imparting to traditional preceptors skills necessary for a new system of education.

The present volume appears thus primarily an attempt to provide two exemplary fables for readers. The narrative presents the public spirit and personal sacrifice of the two leaders: indeed Mukhopadhyay carefully edits his text of any possibly misleading or contrary signal. The prose style is appropriately elevated. One might remember that Mukhopadhyay's eminent contemporary Isvarchandra Vidyasagar had produced in 1856 a volume for children about the lives of modern worthies, Charitabali. The work discusses (in a far simpler style, obviously) the lives of a number of eminent Europeans, who, through industry and merit, overcame poverty and early disadvantages to acquire learning, fame and occasionally wealth. The list is remarkable for including figures who are largely forgotten today: Duval, Roscoe, Stone, Hunter and so on. In fact, Vidyasagar appears to be valuing an utilitarian ethic of industry as opposed to Mukhopadhyay's reverence of a distant past.


What also causes one to speculate about Mukhopadhyay's choice is the fact that even apart from his stated intention of condensing the narrative, he encounters other difficulties in the text. He mentions at the outset that he has avoided “unpronounceable and difficult names” and cut out one or two sections entirely, though he has included nearly all of the life of Publicola. At the outset of Plutarch's life of Solon, there is a discussion of Solon's love for the young Peisistratus, and his legislation that slaves could not learn gymnastics and could not have boy lovers. Plutarch is one of the sources of the tale that Solon accepted Peisitratus as his eromenos, a belief that is by no means supported by other classical writers. But the veracity of the story would hardly be the point: quite clearly any reference to homosexuality would be entirely out of place.  Mukhopadhyay however goes beyond the text of the Life of Publicola to tell us the sad story of the rape of Lucretia by Sextus Tarquinius.

The villainous Tarquin having violated all worldly and divine laws ascended to the throne...When his son, the evil Sextus raped the chaste Lucretia, she being devoted solely   to her husband, told her father, her husband and other eminent Romans, what he had done and relinquishing her life freed herself from the unbearable weight of infamy. (p.2)

What remains elusive are the reasons behind Mukhopadhyay's choice of text. The work as we have it is unforthcoming about its inner history:  there appear to be no hints introduced into the adaptation itself nor are there paratextual flourishes. The work remains thus a fine example of the curiosities that one continually stumbles on in the annals of early Indian print.

Parna Sengupta. Pedagogy for Religion: Missionary Education and the Self-Fashioning of Hindus and Muslims in Bengal (California: University of California Press, 2011)