Notes on a Scandal

Olivia Majumdar writes about a scandal that captured nineteenth century Bengali imaginations and the popular literature that was produced in its wake.

In 1873, Bengal was rocked by a scandal involving a sixteen-year-old married girl named Elokeshī and the head priest of a Hindu temple in Tarakeswar. When an alleged “affair” between the two came to light, Elokeshī’s husband Nobin Chandra Banerjee decapitated his wife, leading to his own arrest as well as the priest’s. The events captured the attention of Bengali society and were recreated in the dramas and popular art of the day. The ‘Two Centuries of Indian Print’ collection features several contemporary dramas that depict what has come to be known as the Tarakeswar affair, including the anonymously penned dozen page drama Ājakāra Bājāra Bhau (1873).

For present day readers and observers, the Tarakeswar affair and the popular literature that sprung up around it has different resonances than it did in nineteenth century Bengal. In light of Elokeshī’s age, it is impossible to perceive her as anything other than a victim of the situation and a victim several times over. As Tanika Sarkar points out, Elokeshī is ‘a girl whose father sold her off, whose guru raped her and whose husband killed her’.[1] Sarkar tells us there was significant ‘public sympathy’ for Nobin Chandra in nineteenth century Bengal, due to his ‘exalted’ caste status (Kulin Brahman), his alleged devotion to his wife, and the difficult decision he faced in “punishing” Elokeshī for her lack of sexual chastity.[2] I doubt that readers today can muster the same level of sympathy for Nobin Chandra as nineteenth century Bengalis. Nonetheless, the context of the era, including the authoritative status of temple priests, helped shore up public support for Nobin in 1873; the ‘poor and helpless Brahmin youth who finally managed with the aid of law and justice to expose the mighty, over-powerful mohunt [priest]’.[3] Other dramas of the era also skewered authoritative figures in society through satire, such as Michael Madhusudan Dutta’s Buṛo Śālikera Ghāṛe Ro (1860), which condemns the behaviour of a powerful, elderly Hindu landlord who is outwardly pious while being inwardly lustful. 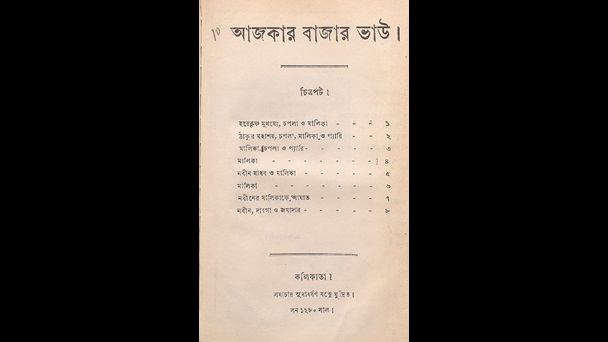 Ājakāra Bājāra Bhau was published in Calcutta in 1873 by the Samācāra Sudhābarshaṇa Press. It is a particularly rich example of a scandal play as it features coloured illustrations alongside the dramatic text. By comparing these illustrations to a series of Kalighat paintings created circa 1880, we can understand how the depiction of the three main characters in the Tarakeswar affair (Elokeshī, Nobin Chandra and the priest) differed between nineteenth century texts, as well as better comprehend the distinct perspectives on gender, sexual and social politics that artists of the period brought to their portrayals of the affair:

These two visual depictions portray two radically different readings of the events that took place. In the first both Elokeshī and the priest (Madhavchandra Giri) appear to be willing participants. W.G. Archer characterises this painting as depicting the ‘‘slavish subservience’ to which [Elokeshī] appears to have reduced [the priest]’ and describes Elokeshī as the priest’s ‘mistress’.[4] Elokeshī is presented as the more dominant figure as the priest is shown standing up and fanning her while she sits, and her jewellery and dark red sari can be read as attempts to seduce the priest. The expression on the priest’s face denotes something of the ‘slavish subservience’ that Archer identified meanwhile Elokeshī’s expression can be read as somewhat coy.

This depiction of Elokeshī should not be read simply as reductive misogyny as there was also a strong caste and class element to both the Tarakeswar affair and the consequent depictions of it. Anindita Ghosh reminds us that nineteenth century cities such as Calcutta were melting pots of different caste, class and ethnic groups, and these cities ‘made room for new aspirants who challenged the comfortable boundaries of the educated and propertied classes’.[5] She adds that the artisans and workers who helped produce the popular culture and scandal literature of this era were often strong critics of the ‘Bengali elite’, to which Elokeshī, Nobin Chandra and the priest all belonged.[6] Seen in this light, the Kalighat painting can be read as a condemnation of the morals of genteel upper-caste and upper-class Bengali society that enabled such a scandal to transpire, as much as it is a specific condemnation of Elokeshī.

The coloured plate from Ājakāra Bājāra Bhau presents a stark contrast to the Kalighat portrait. It depicts a far more predatory dynamic where Elokeshī is being unwillingly dragged towards the priest by her female relatives. These two radically different illustrations of Elokeshī and the priest’s relationship articulate the implicit tension for the contemporary Bengali public in how to interpret this supposed affair. Was Elokeshī indeed the ‘mistress’ of the mohunt and the primary antagonist of the scandal, whose death at the hands of her husband was therefore justified? Or was she a victim, misled by her family and abused by the priest, whose death made her a martyr to the dominant forces of society? The second reading was clearly the more problematic for contemporary Bengalis to accept due to the social corruption it brought to the fore. As Sarkar points out, ‘what is the nature of a Hindu society in which parents betray their own daughter, a husband kills his wife, and a religious guru rapes a devotee?’.[7] We see in Ājakāra Bājāra Bhau this tension resolved by displacing it onto the figure of Elokeshī’s cruel stepmother, therefore allowing the drama to depict both Elokeshī and Nobin Chandra in a sympathetic light and sidestepping any real probing into the state of contemporary Bengali society.

The female figure who helped facilitate sexual liaisons between men and women was a stock figure in nineteenth century dramas and appeared in plays such as Buṛo Śālikera Ghāṛe Ro, as well as in the work of Rāmanārāẏaṇa Tarkaratna, Dīnabandhu Mitra and others. It is unsurprising to see the appearance of this figure in Ājakāra Bājāra Bhau in the form of the evil stepmother named Chapala in the play. The anxiety that surrounded the sexual morality and choices of upper-caste and class women during this period can be related to the precarious status of ‘respectable’ women who chose to pursue extra or non-marital relationships in the nineteenth century. As Aparna Bandyopadhyay tells us, ‘a woman’s clandestine relationship, once discovered, was punished with permanent familial and social ostracism, and irreparable loss of caste and kul’.[8] A result of this familial and social exile was that large numbers of upper-caste women began to practice sex work: ‘the elopement-desertion syndrome’ as Bandyopadhyay terms it ‘was a significant factor contributing to prostitution even in the early decades of the twentieth century’.[9] In light of this it is unsurprising that figures such as Chapala, who encouraged or helped enable extra-marital “affairs”, featured strongly as antagonists in nineteenth century dramas.

In Ājakāra Bājāra Bhau, Chapala orchestrates the entire affair that leads to Elokeshī’s death and Nobin Chandra’s arrest. The Elokeshī character, named Mallika, is tricked by her stepmother into visiting the priest under the pretence of looking for a cure for infertility, where she is then drugged and raped.[10] The priest figure is a shadowy presence, who is never heard speaking or explicitly shown in the text; instead it is Chapala who is depicted as the main villain. Mallika and her husband are each given short monologues in which they condemn Chapala’s heartlessness at different points in the text. Mallika’s father’s complaints about his wife comprise the soliloquy that opens the play, as he criticises Chapala for being domineering and giving him little peace in his old age.[11] After being raped by the priest, Mallika mourns: ‘হা বিধাতা আমার ভাগ্য এই ছিল? যদি আমার আপনার মা বেঁচে থাকতেন, তাহ’লে এদুর্গতি কি আমার হতো? হায়! এ বিপেদ কি আমি পর্ তাম? কখনই না’ ‘Oh god, was this my fate? If my own mother was alive would this misfortune have befallen me? Oh! Would I have fallen into this calamity? No never’.[12]  Later, when Nobin hears of what has happened, he exclaims that Mallika’s father has lost all his wisdom through marrying again.[13] In this way, not only Elokeshī but also the priest and Nobin Chandra are relieved of any responsibility for the text’s events; the blame is laid squarely at the feet of the merciless Chapala.

Sarkar tells us that this framing was not uncommon. She notes that some dramas depicted Elokeshī’s father as an ‘old man … cruelly manipulated by the young and greedy stepmother’ and that the stepmother’s greed motivates the ‘old man’ to sell his daughter to the priest to pay for his new wife’s jewellery. In this way, as Sarkar points out, the central discomfort of the Tarakeswar affair that the ‘male guardians [of] the Hindu family and society emerge as decisively unworthy’ can be displaced onto the figure of a ‘greedy and corrupt woman relocat[ing] the story on a more familiar and acceptable register of misogyny’.[14] I would argue that this is precisely what underpins the narrative structure of Ājakāra Bājāra Bhau, where the stepmother is cast as the drama’s main villain, rendering the father’s carelessness, husband’s violence and priest’s sexual assault as symptoms of a woman’s overarching scheme.

A close reading of a scandal drama such as Ājakāra Bājāra Bhau can help us better understand the sexual and gender politics that were playing out in nineteenth century Bengal. By locating Ājakāra Bājāra Bhau as one part of a wider mosaic of scandal literature and art about the Tarakeswar affair, we can also better understand the differing and often contradictory responses of nineteenth century Bengalis to the scandal.

[10] A similar situation almost befalls the first wife of a landlord desperate for an heir in Rituparno Ghosh’s 2005 film, Antarmahal, which depicts the nineteenth century household of zamindar (landlord)