On the Proper Respect to Widows: A Rare Nineteenth Century Chapbook

Sarbajaya Bhattacharya reviews an advice manual posing moral concerns about the treatment of elderly widows in the Bengali household.
Priced at one anna, Harimohan Karmakar's Othh Chhnuri Tor Biye comes with an English subtitle - 'On the Proper Respect to Widows'. The title itself is a popular Bengali adage, referring to a sudden plan that must be put into action with immediate effect. In this work, as will be revealed, the adage is taken quite literally.

Published from Calcutta in 1863, the author of this chapbook claims that he had no desire to write the book but has done so on the insistence of his friends. The advertisement at the beginning of the work in which he makes this claim also states the purpose of the book - to advise young men on how to treat their mothers. Why was it necessary to publish such a work?

Advice manuals were not a rarity in the Bengali book market of the nineteenth century. The most popular of them were almost always addressed to women. Written by men, and later also by women, these advice manuals primarily instructed women on how to manage the household. In a reversal (although not of subject matter), the target reader of this work is men, particularly young, married men, men who have forgotten about their mothers after their marriage.

Oth Ch(n)uri Tor Biye (Get Up Girl, It’s Your Wedding) 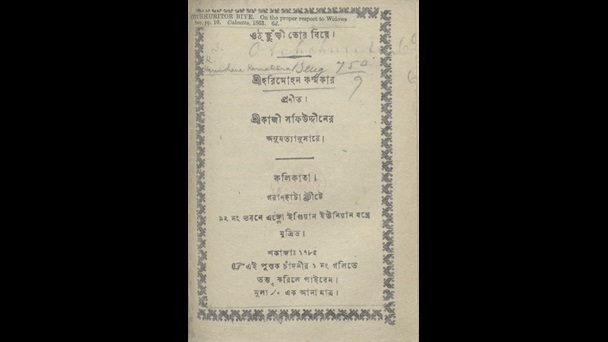 The work, in most part, is a conversation between two women - the wife of a merchant who remains unnamed and her neighbour whose name is Rangili. It was not unusual for a male author to assume the voice of a woman to propagate their ideas about issues pertaining to domestic life.

The world of the home was considered the world of the woman. Writing in the voice of the woman allowed the male author access to a kind of authenticity and authority regarding the domestic issues that the text dealt with. In fact, many of the advice manuals written by men were under female pseudonyms. In this particular work, the presence of a third person narrator means that the male author does not literally occupy the voice of the woman. Rather, the conversational tone of the work makes it seem as if the narrator, and through him the reader, is eavesdropping on a conversation. What is the conversation about?

Rangili finds the wife of the merchant sitting alone, visibly upset. The conversation, in rhyme, begins with Rangili asking the wife of the merchant the cause of her unhappiness. She thinks it is because her husband is ignoring her. It is only natural, argues Rangili, that as youth slips away, men will turn their faces away. It is nothing to be upset about, she concludes. Rangili then advances a scathing critique of young men and the way they behave with their mothers after marriage.

It is a familiar argument in many ways, invoking the biological claim of the mother over her child, the pure nature of motherly love that will go to any lengths to protect the child. It is the mother who carries the child in her womb for ten months, it is she who spends sleepless nights when the child falls ill. It she who feeds him and nourishes him. She is the image of sacrifice and selflessness.

In Rangili's speech, the young, married man is constructed in opposition to this image of selfless love. As soon as he finds a wife for himself, he forgets all about the mother. The young wife wins him over with her youth. She spends her days in front of the mirror tending to herself. She does not lift a finger to help in the kitchen. The description of the young woman was also a familiar one at the time of the publication of this work. The new generation of educated women, often referred to, quite literally as the 'New Woman' was mainly criticised for being lazy, and one of her primary symptoms was the hours she spent in front of the mirror. Rangili's description of the young wife fits into this body of criticism.

It turns out, however, that the real cause of the merchant wife's unhappiness is neither her husband nor her son. She is worried about her daughter who has turned thirteen and is still unmarried. She is worried that if they cannot find a match for her soon, they won't be able to show their face in society. She has quarrelled with her husband the previous night over this issue, and the merchant has now gone in search of a husband for their daughter.

The last section of the text reveals that a match has finally been found. The man has been described in a deliberately amusing manner. His nose will put any owl to shame, the narrator says, and if he stands in the dark, he may be mistaken for a ghost. He has also lost two wives. But in the absence of time, he will have to do. So the next morning, the girl is asked to prepare herself for her wedding. Social prestige and peer pressure wins over the future of a young girl.