Oppressions of the Indigo Planters

In the summer of 1861, a Bengali song appeared in the pages of Somprakash, a leading periodical from Calcutta. In it, a poet titled Dhiraj sang:

The Neel Darpan of Mr Long is accurate and true
Our peasants’ scanty coins have disappeared into the blue.
With sorrow spent the poor lament the soreness of their plight
Of their woes in purple prose does Harish Chandra write.
Grant and Eden, men of reason, righteous and fair
Try to ease the farmers’ lot and lift them from despair.
The Indigo Report perusing, who can keep from swiftly losing
All good humour at the rumour of Wells’s unjust decree?
Guiltless Long stood in the dock while Wells and Jackson and Peacock
Whom mere confinement failed to please, fined him a thousand new rupees
Muttering against the swine, good Singha-babu paid the fine.
So then they set on Walter Brett with cries of “Treachery!”

This was just one instance of the polyphony of print that had erupted in Bengal in the years immediately following the end of Company rule in 1857 and the incorporation of the subcontinent into the British Empire. One of the chief embarrassments that the newly anointed Raj had inherited from the Company was the indigo industry, which was marked by widespread oppression by planters on the ryots or the farmers, resulting in forced cultivation of the crop across the lower delta of Bengal.

From the middle of the 1850s, a loose coalition comprising Bengali intelligentsia, the missionaries, and the Bengali press had started building opinion against the indigo planters. The Calcutta Missionary Conference of 1855, for instance, levelled a range of charges against the indigo planters, which were indignantly refuted by the pro-planters English-language press of Calcutta. By the end of the decade, the opposition against the planters was spearheaded by the legendary Harish Chandra Mukherjee (1824-61), and his newspaper The Hindoo Patriot. But the most celebrated literary response to the indigo question was Dinabandhu Mitra’s play Nil-darpan, and its subsequent translation into English as The Indigo-Planting Mirror, carried out chiefly at the behest of Rev. James Long. As is well known, Long was indicted and convicted for libel for his role in facilitating the work, and served a prison sentence.

But there were other responses too, and the current pamphlet is one of them. Running to no more than 16 pages, and printed at the Hindoo Patriot Press by ‘Wooma Churn Dey’, the pamphlet is cast in the form of a lively dialogue between Shyamchand Ghosh, an urban sophisticate, and Abhinaschandra Das, a local of Golakpur village in Pabna district. There are a number of songs at the beginning and the end, indicating that this may have been intended for performance.  The work is undated, but the original British Museum catalogue compiled by J.F. Blumhardt gives the date of publication as 1856. This is unlikely—a more plausible date would be either 1860 or 1861. 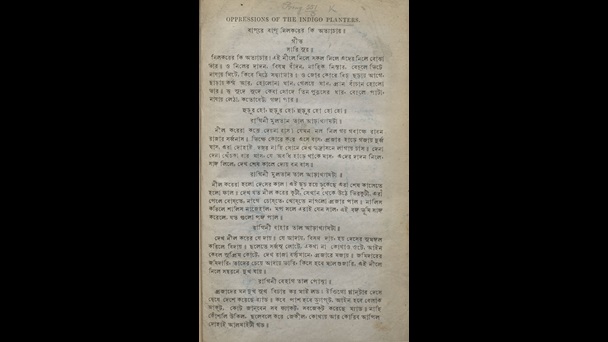 The dialogue begins with Shayamchand (the choice of this name may not have been accidental, as ‘shyamachand’ was also the name of a whip or leather crop used by planters to beat the ryots) evincing naïve interest in an indigo plant. Abinashchandra is amused at the ignorance of the college-educated young man and soliloquizes: ‘See, these educated people who have lived in cities all their lives, have attended college, and are never seen without books. How would they know about the countryside? Well, now that he is here, he will have to learn everything afresh’. In the next few pages, Shyamachand is given a crash course by Abinashchandra on all aspects of the indigo trade—the botanical, the economical, the political and the social. In particular, Abinashchandra draws the young man’s attention to the debt trap in which the ryot’s family find themselves on acceptance of dadan, which is a cash advance forced upon the ryot by the planter.

Soon the young man is able to see an instance of atrocity. He comes upon a scene of lamentation, where a woman with several children is seen bewailing her husband’s abduction by the hired goons of the planter. The villagers present are at first apprehensive about the stranger, but open up once Abinashchandra vouches for him. What follows is a familiar enough tale, but one that comes as an eye-opener to Shyamachand who then proceeds to lecture the villagers on the ‘Black Act’ and various other legal redresses available to them (the so-called ‘Black Act’ of 1849 sought to end European immunity from the jurisdiction of local courts). The encounter ends of an upbeat note, and is followed by songs.

[1] The song by Dhiraj has been translated from the Bengali by Aparna Chaudhuri.