The first rail journeys in India aroused such awe and fear in the populace that pamphlets like 'Directions of a Railway Traveller' provided much needed advice for passengers. Abhijit Gupta delves into the pamphlet, revealing the behaviour that early railway users were expected to adopt and the comparison with modern rail journeys in India.

In 1853, the first-ever passenger train in India ran from Bombay to Thane, under the management of the Great Indian Peninsular railway. The following year, on 15 August 1854, the first-ever train steamed out of Howrah station, just across the river from the imperial capital of Calcutta. Reportedly, three thousand people applied for tickets on the first run but only a fraction could be accommodated. The service was run by the Eastern Indian Railway, set up nearly a decade ago in 1845, following a proposal from Rowland McDonald Stephenson who was to become its first managing director. His plans for the new railways may be found in a pamphlet he published in 1845, titled Report on the Practicality and Advantages of the Introduction of Railways into British India.

From August 1854, the company ran a regular service from Calcutta, first to Hugli and then all the way to the colliery town of Ranigunj. Expectedly, the new technology aroused awe and fear in equal measure. How safe were the railways? Would the train come off its rails? Would the wind of its passing harm cattle and bystanders? By 1862, Kaliprasanna Singha—one of the leading lights of the ‘Bengal Renassiance’—would be able to write a whole chapter on the train journey from Howrah to Allahabad in Hutom Pyanchar Noksha (‘The barn-owl’s sketches’). But in the mid-1850s, such a thing could not be imagined. So forward Akkhaykumar Dutta. In 1854, a slim pamphlet was issued by the Tattvabodhini Press, with a bilingual title: ‘Directions for a Railway-Traveller’ or ‘Bashpiya ratharohidiger prati upoadesh’. Literally translated, the Bengali title meant ‘Advice for those riding the steam chariot’.

Who was Akkhaykumar? He is best described as a freethinker, a philosophical radical who upheld rational doubt as the cornerstone of his critical writings. He was the editor of Tattvabodhini Patrika¸ the organ of the newly emerged Brahmo Samaj (Brahmoism was social and religious reform effected through a re-appraisal of ancient Vedic texts, new rituals focusing on a Supreme Mover ‘Brahmo’). He also wrote extensively on popular science, women’s education and universal secular education. It was therefore no surprise that he would be among the first to demystify railway travel for the public.

Akkhaykumar’s pamphlet was a slim affair, running to just 20 pages. It began with a short introduction on the wonders of steam and then moved on to itemizing a set of rules for train travel. The first exhorted the passenger not to entrain or detrain while the carriage was in motion. It referred to a recent incident of derailment near Serampore when some panic-stricken passengers jumped off and received grievous injuries. In this context, Akkhaykumar urges the passenger not to be taken in by the relatively slow speed of the train. The second rule warned passengers not to stick out their body parts through the windows, or to leap from one carriage onto another. Passengers are also warned not to ride on the roofs of carriages, an injunction which still remains relevant in certain sectors of Indian train riding. Akkhaykumar calculates that 28% of railway-related deaths have occurred owing to passengers violating the above rules, resulting in a total of 17 casualties. It is not clear whether he is referring to India or railways in general. 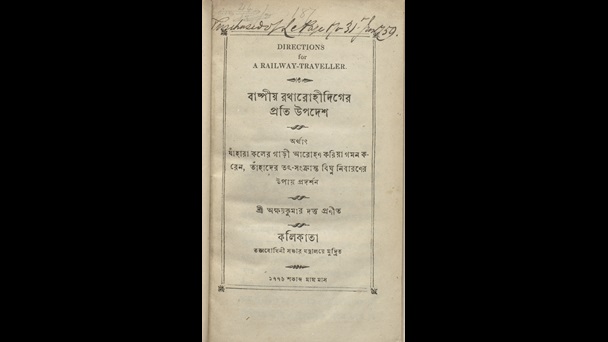 The third rule enjoins passengers not to disembark needlessly before arriving at their destination, while the fourth explains the sides from which passengers should get off and on trains. The fifth warns passengers about crossing railway tracks on foot without due precaution. Similarly, the sixth rule warns the passenger to be vigilant while waiting for a train at a station, and not fall into sleep. Other rules touch upon the inadvisability of recovering personal effects if they have fallen on the tracks, and the advisability of occupying compartments in the middle in the event of an accident occurring. There is reference to a recent collision at Boinchi station between a waiting train and a down train from Ranigunj, and the injuries sustained by some of the passengers.

After enumerating as many as a dozen directions, Akkhaykumar added some ‘fast facts’ relating to the service from Howrah. We learn that the service did not operate on Sundays, and that ticket counters closed three minutes ahead of the scheduled arrivals at most stations. Return tickets could be bought, infants in arms did not have to buy a ticket, and half-tickets could be availed of by those below the age of eight. Freight rates were also given (one anna per maund for every three miles of travel).

But by far the most interesting section of the pamphlet is a foldout at the end giving the timetable and the fare chart of the service between Howrah and Ranigunj. The first thing that strikes one is the use of the word ‘adda’ for station, which seems to suggest that the word was first used in Hindi (an airport is called hawai adda in Hindi). Then, as now, the distance between Howrah and Ranigunj was 201 miles, but there were just 21 stations, which works out to an average of one station per 10 miles. The morning up train would leave Howrah at 10.30 am, and reach Bally 15 minutes later, which is not bad going at all, since it takes pretty much the same time even now. It took exactly one hour to reach Chandernagore, and from there another two to reach Burdwan.

There were altogether seven stations from Howrah to Mogra, but just two between Mogra and Burdwan. The first is given as Pe(n)ro and must surely be modern-day Pandua, while the other was and continues to be Memari. At Burdwan, the train took a half-hour break and resumed its journey at 2 pm to reach Ranigunj at 4.30pm, taking in stations such as Mankar, Panagarh and Andal.  The fare chart is less easy to decipher, being given in the older pre-decimal system. We find that a first-class single to Burdwan cost as much as Rs 8, though it fell sharply to Rs 3 and Re 1 for the second and third classes respectively. The cheapest fare was an anna-and-a-half, for a trip between Howrah and Bally. Those interested in this particular line may also refer to a pamphlet from 1855, titled The Rail and its Localities: A Guide to Places Along the Railway Line from Howrah to Raneegunj