Sukanta Chaudhuri writes about the work of Ramkamal Bhattacharya, who translated Francis Bacon’s Essays into Indian languages. As Chaudhuri explains, Ramkamal’s undertaking reflects the radical changes in the intellectual milieu of mid-nineteenth-century Bengal.

Ramkamal Bhattacharya (1834-1860) was the first to render Bacon’s Essays in an Indian language. He translated sixteen essays in Bacon arthat tadiya katipay sandarbha (‘Bacon, that is, several of his essays’), published by the Gauriya Press, Kolkata, in 1861. Dharmadas Adhikari followed with a complete Prabandhabali in 1875. These appear to be the only versions of the Essays in any Indian language in the nineteenth century. (There was a Bengali Advancement of Learning in 1863.)

Ramkamal’s pieces, unlike Dharmadas’s, are not straight translations. The English description on the title-page renders the contents more accurately: Bacon’s Essays selected and rendered with sundry adaptations. The adaptations are sometimes very free indeed: in one or two cases, the originals take some tracking down.

Such redactions of the Essays were not unknown in that age, even in English. The most popular edition, by Richard Whately, ran into six editions between 1856 and 1864. Whately left the original essays intact, but followed each of them with one or more ‘Annotations’ that were effectively stand-alone essays in their own right. Ramkamal works his own changes into the Bengali text without signposts. In fact, the book is entirely without annotations or apparatus of any sort, not even a preface. 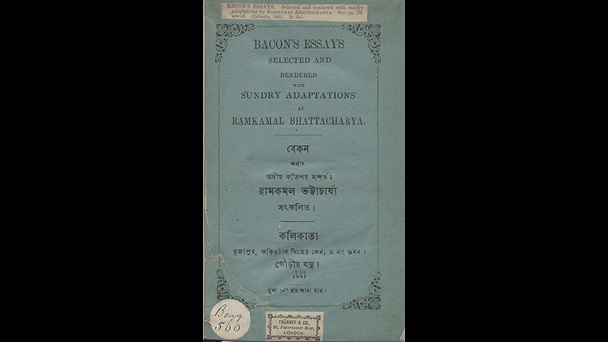 Ramkamal did not live to fulfil the promise of his early years. A distinguished student of the Sanskrit College, Kolkata, he read deeply not only in Sanskrit but, following the curricular reforms of Ishwarchandra Vidyasagar in mid-century, also in English and European material. Like his renowned brother Krishnakamal Bhattacharya and many other Bengalis of his generation, he was deeply influenced by Auguste Comte’s positivist thought and concomitant atheism.

His three chief works testify to both the range and the originality of his interests. One was an Elements of Geometry (so titled in the English translation) in which he drastically abridged and reworked Euclid. The second was his translation of Bacon – more original than appears at first sight, as the following account may bear out. The third, unfinished venture was a study of John Stuart Mill in combination with classical Indian philosophy. He also wrote a history of England in Bengali, and some minor essays.

Sadly, his sight began to fail alarmingly just as he was completing college. He was also afflicted by various other illnesses through his few remaining years. This may have been a factor behind the clinical depression that made him take his own life in 1860. All his works were published after his death: the Bacon and the History of England in 1861, Elements of Geometry in 1862.

During his brief working life, his health and temperament stood in the way of an academic appointment befitting his abilities: this may have been another cause of his depression. He found employment as headmaster of the Calcutta Normal School. The students of this school were the first intended readers of his versions of Bacon.

‘Versions’ is a better word than ‘translations’, for most of the sixteen pieces both abridge and embellish Bacon’s originals. Bacon’s essays abound in classical quotations and historical references; Ramkamal omits them, presumably because the student readership would be unfamiliar with their context. This does not mean he eschews all mention of European matters. In the essay ‘Of Fortune’, for instance, he makes a reference to Cardinal Richelieu not in the original, and another to Sir William Jones that obviously could not have been.

But there are few such instances – few, also, of the opposite practice of inserting Indian references, though the Jones reference is on the same page as a remark on the incompatibility of Lakshmi, the goddess of wealth, with Sarasvati, the goddess of learning. We might take these rare mythological allusions as rhetorical: Ramkamal’s atheism prevents him even from talking, as he might have done, of Bhagyalakshmi, the Indian goddess of fortune.

Inevitably, Ramkamal’s versions are much more abstract and didactic than their originals. He ignores Bacon’s striking aphoristic openings – in ‘Of Great Place’, ‘Of Studies’, or ‘Of Parents and Children’, for instance. ‘Of Great Place’ opens:

Ramkamal replaces this with the more humdrum

So too with the opening of ‘Of Parents and Children’:

The joys of parents are secret; and so are their griefs and fears.

Children are the cause of many joys, but also of many griefs.

On the whole, Ramkamal’s Bengali versions are not markedly shorter than the originals; but they read like extended summaries, largely owing to the omission of concrete examples and allusions, or simply by exchanging Bacon’s epigrammatic style for a flatter, more expansive didacticism. The rendering of ‘Of Studies’ is a specially good example. The modern reader might be nonplussed by the title ‘Shastracharcha’, ‘study of the shastras’; but more readily than today, shastra could mean any branch of studies, as Bacon’s context (preserved by Ramkamal) makes clear, especially in the latter part of the essay.

Ramkamal was a consummate Sanskrit scholar. His style reflects this training, not always happily. Krishnakamal Bhattacharya observes how his elder brother’s prose, especially when translating Bacon, unusually combined the two stylistic tendencies of the age, one highly Sanskritic, the other more popular and colloquial: ‘now he uses difficult, ceremonious Sanskrit words, and the very next moment, fearlessly employs very simple Bengali words.’1

To readers in the twenty-first century, the Sanskritic element may seem much more in evidence. In an age when virtually all educated Bengalis knew some or much Sanskrit, and could employ its resources to coin new words more freely than today, Ramkamal was not the only writer to avail of this advantage. Some of his formations can be decoded with relative ease; others pose daunting challenges. Even a reader well-versed in Sanskrit might be put off by words like bichchhittibarjita, arbbagdrishti, svasanvedya, prarhvibak or bijnabruba.

Today, Ramkamal’s version of Bacon is no more than a curiosity. But it reflects the radical changes in the intellectual milieu of mid-nineteenth-century Bengal: the organic assimilation of material from vastly different times and cultures; the development of the Bengali language to address these new realms of knowledge and sensibility; above all, a new, serious engagement with human and social issues, as mediated by a new pedagogy. We may not feel unduly excited as we read it, but it is a witness to an exciting period of Bengali cultural history.

The Bengali titles and their English originals:

‘Swastharaksha’:    ‘Of Regiment of Health’