Fiona Ross discusses the development of Bengali typography and its significance in understanding the history of Bengali printed works.

The project ‘Two Centuries of Indian Print’ is of immense importance in making printed books accessible in digital form to researchers and the public alike. This collaborative project led by the British Library transcends physical boundaries whilst conserving the original, often fragile, imprints, for future generations.

The first phase of the project sees the digitization of 4000 early Bengali books, yet it is not only the content of the books that is of significance to researchers but also their material properties that can be appreciated even in digital form. This is exemplified by two publications that form the focus of this brief essay.

The two books in question, Nathaniel Brassey Halhed’s A Grammar of the Bengal Language (Hoogly, 1778) and Graves Chamney Haughton’s Rudiments of Bengali Grammar (London, 1821), reveal particularly interesting issues regarding their conception, gestation and production that heralded the beginnings of Bengali typography and profoundly affected the textual representation of the Bengali language for the following two centuries.

It is a curious phenomenon that the prefaces of early Indian imprints frequently concern themselves, or reveal concerns, with these early typographic endeavours that are rarely documented in printing histories of South Asia – the latter focussing more on the establishment of presses, the publications produced and their distribution. On the other hand, as in all historical accounts, the statements given in prefatory notes need to be interrogated as to their veracity: they often reveal more about their author and the prevailing social mores than the facts they are purporting to recount.

Halhed’s preface to the Grammar of the Bengal Language at the outset describes the intentions of its publication in hegemonistic terms, reflecting the prevailing attitude under the governorship of Warren Hastings that ‘the Natives of Europe’ were to be assisted in learning Bengali in order to rule over their Indian subjects.[1] There is yet cause to celebrate this publication as demonstrating the first successful attempt at the reproduction of the Bengali language in metal type.

The difficulties in acquiring a suitable fount of Bengali types for the Grammar are described by Halhed in the preface. Whilst accepting that Bengali letterforms are difficult to capture in metal, Halhed castigates an earlier attempt by William Bolts with some justification – the incongruous design of principal characters seems to be attributable to the use of poor lettering models[2] – and he recounts how the Governor General solicited Charles Wilkins to ‘undertake a set of Bengal types’ whose success ‘exceeded every expectation’.[3]

According to Halhed, Wilkins with no previous training ‘singly’ undertook all the requisite occupations of the ‘Metallurgist, the Engraver, the Founder and the Printer’ and with ‘the application of personal labour’ … and ‘a rapidity unknown in Europe’ completed the design, cutting and casting of the fount, as well as the composition and printing of the Grammar.

Establishing correct and full attribution of authorship to typefaces is a perennial issue that challenges type historians. Type-making, particularly in vernacular scripts, has rarely been a solitary practice and many examples exist of uncredited assistance even in Latin type design and production. The feats ascribed to Wilkins are clearly implausible – and physically unfeasible within the known timeframe – even from one skilled in typefounding, rather than one who was reported to have taught himself from ‘Chambers’s Cyclopeadia’.[4]

Information largely derived from another preface, that of John Borthwick Gilchrist’s A Dictionary, English and Hindoostanee (Calcutta, 1787), indicate that Wilkins was assisted ‘from the first, and through the whole process of forming his Bengal and Persian founts, for which that Gentleman [Wilkins] assumed or received exclusive merit’, by Joseph Shepherd, who produced the Persian types for Gilchrist’s dictionary.[5]

It is also evident that Wilkins at some stage employed a blacksmith, Pañcānana Karmakāra, for casting the types for the Grammar; Karmakāra became a proficient typefounder working at the Honourable Company’s Press under Wilkins’s superintendence, and subsequently at the Serampore Mission Press.

A Grammar of the Bengal Language 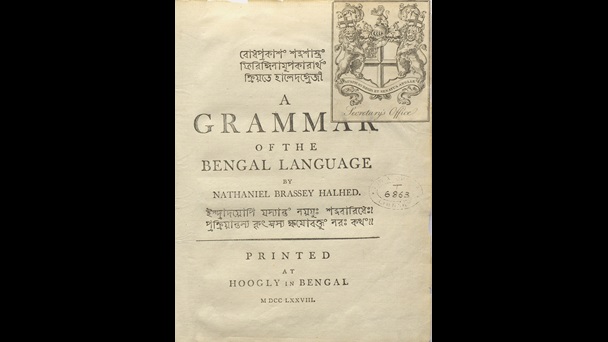 As indicated above, and as stated on the title page, the Grammar’s Bengali types were intended not for the native reader but the foreigner. Halhed’s comment that letters that are taught ‘should be divested of every superfluity that may distract the attention, or clog the memory’,[6] provide a clear indication of why the formation of the Bengali typeforms diverges considerably from the vibrant lettering in the manuscripts owned by Halhed and Wilkins at the time.[7]

The somewhat simplified design of the relatively large types contradicts the stroke formation of Bengali penmanship, and accords more with European sensibilities, fitting well with the Latin types that necessarily predominate in the Grammar. The book is modelled on European typographic conventions: being in portrait form – contrary to most Indian manuscripts – and with the introduction of interword spaces and Latin punctuation in the Bengali texts, it established a Bengali typographic tradition that persists.

Close analysis of the imprint reveals that Wilkins’s first Bengali fount[8] comprised some 170 sorts and that conjuncts (consonantal clusters), which can number in the many hundreds, were mostly achieved through the fusion of common components, with some crude results. Perhaps unsurprisingly in the field of typography, Wilkins’s design and method of composition was imitated by other typefounders and printers[9], yet the later types that can be ascribed to Wilkins as used in Haughton’s Rudiments of Bengali Grammar show a marked development in his typographic skills and understanding.[10]

As Haughton’s preface explains, the lack of Bengali types with which to print an English edition of William Carey’s A Grammar of the Bengalee Language[11] drove him to prepare ‘an entire grammar’ for Company servants to learn Bengali at East India College (Haileybury).[12] Haughton’s Grammar, whose pages were printed daily as he wrote them,[13] shows a readable and quite elegant Bengali fount, that with its smaller type size and better fitting makes more economical use of the page.[14] However, the letterform construction is still not natural to Bengali chirographic practices.[15]

Drawings made by Charles Wilkins of Bengali letter forms

Recovered artefacts belonging to Charles Wilkins, comprising punches, matrices and drawings that are held by the British Library, reveal the working processes and workmanship of the types produced for Haughton’s Grammar; they also enabled a reconstruction of the one of its text passages.[16] The exercise demonstrated the use of a larger character set to include many frequent conjuncts; the use of reduced forms to create additional conjuncts; and the use of kerning vowels signs, requiring the type to be filed to fit neatly with a host consonant – all practices that occupied Bengali typefounders and compositors for centuries.

Whilst Halhed’s Grammar with its use of the first usable Bengali fount laid down enduring typographic conventions, the production of Haughton’s Grammar, despite continuing to address the foreign user, characterises the constant search for optimal vernacular typographic representation. Being cognisant of technological constraints, determining the character set, seeking improved means of composition, and refining the shaping of typeforms to provide a faithful visual representation of language for its intended readership are concerns that continue to preoccupy type-makers.

Another view of Charles Wilkins' box of typographical instruments

Although the haptic experience of scrutinising an imprint may not be substituted, the digitisation project will widen access to rare resources and facilitate deeper analysis of significant Indian imprints – in particular the typographic aspects.

A Grammar of the Bengal Language, and Rudiments of Bengali Grammar will soon be available to explore within this exhibition.

[8] A second smaller fount of limited characters is shown in the book on page facing 209.

[10] No doubt garnered through his post as Printer to the Company, from which he retired in 1784 through illhealth and his continuing typographic activities following his return to England in 1786.

[11] A fourth edition of which had been printed at the Serampore Mission Press in 1818.

[14] The unexpected find of 3-inch drawings of Modi typeforms in Wilkins’s hand for punch-cutting purposes also provide a unique indication of the design process for Indian type in the nineteenth century.

[15] Neither with the formal or the cursive styles of handwriting. This was to change with the types of the Baptist Mission Press who collaborated with writing masters, as shown in their 1826 type specimen book.