An Evening with Miss Marple

This event was originally scheduled for 13 September.  Existing bookers will be contacted with further information.

‘Miss Marple reflected on the fact that evil hadn’t been out there in the street amidst the pagan throng last night but right here, inside in the cosy, well-appointed sitting room of this elegant home…’

Miss Jane Marple requests the pleasure of your company ‘at home’ with some of her favourite writers. Join us to celebrate the launch of Marple, an ingenious collection of 12 new tales crafted by some of the world’s most acclaimed writers including Naomi Alderman, Jean Kwok and Val McDermid. Each story takes inspiration from Agatha Christie’s classic originals to feature a new mystery for Miss Marple to solve. As ever, she knows more than she appears to.

Damian Barr hosts a joyful celebration of all things Marple with best-selling contributing authors Lucy Foley and Kate Mosse as well as Agatha Christie’s great grandson James Prichard. Expect new stories, timeless mysteries and, as ever, more than a touch of the unexpected with the spirit of Miss Marple being very much present...

Bar open from 18.30. The event is followed by a book signing.

Online event bookers can buy a copy of Marple with a ticket at checkout for £23 (with UK postage) and watch the event for free. International postage will be higher. Books will be posted out within 7 days after the event. Please ensure your address is up to date on your British Library account.

Miss Marple was first introduced to readers in a story Agatha Christie (1890–1976) wrote for The Royal Magazine in 1927 and made her first appearance in a full-length novel The Murder at the Vicarage in the 1930s. It has been 45 years since Christie’s last Marple novel, Sleeping Murder, was published posthumously in 1976, and this collection of new stories by 12 Christie devotees will be a timely reminder why Jane Marple remains the leading fictional female detective of all time.

Lucy Foley is the No.1 Sunday Times bestselling author of The Hunting Party (2018) and The Guest List (2020), with two and a half million copies sold worldwide. They were followed by The Paris Apartment, published in March 2022 that instantly took the number one spot on The New York Times bestseller list. Lucy’s thrillers have also been shortlisted for the Crime & Thriller Book of the Year Award at the British Book Awards, selected as one of The Times and Sunday Times Crime Books of the Year, and The Guest List was a Reese’s Book Club choice. Lucy’s novels have been translated into multiple languages and her journalism has appeared in publications such as Sunday Times Style, Grazia, ES Magazine, Vogue US, Elle, Tatler, Marie Claire and more.

Kate Mosse is an international bestselling novelist, memoirist and playwright as well as Founder Director of the Women's Prize for Fiction. Her novels and short story collections, include the The Burning Chambers Series – The Burning Chambers and The City of Tears – as well as the multi-million selling Languedoc Trilogy – Labyrinth, Sepulchre and Citadel – and No 1 bestselling Gothic fiction including The Winter Ghosts and The Taxidermist's Daughter, which she has adapted for the stage. Her books have been translated into 38 languages and published in more than 40 countries. She has also written four works of non-fiction – including An Extra Pair of Hands (Wellcome Collection, 2021) – four plays, and contributed essays and introductions to classic novels and collections.

Damian Barr’s Literary Salon is where the world’s best writers share their new books and reveal their own personal stories. The Salon's events, online and in-person, are where readers and writers meet. It’s must-listen podcast features weekly world premiere readings and revealing interviews from a heady mix of literary icons and emerging talents. Armistead Maupin, Miriam Margolyes, Bolu Babalola, Dolly Alderton, David Nicholls and Russell T Davies are just some of the writers to have shared their stories with The Salon since its launch at Shoreditch House in 2008. Stories are for everybody, and everybody has a story. www.theliterarysalon.co.uk

Lucy Worsley is no longer able to take part in this event due to prior commitments on the new date. 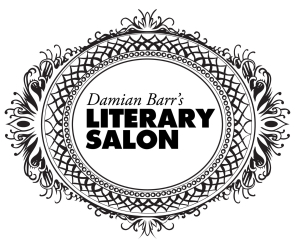