The Extraordinary History of Soviet Music on the Bone 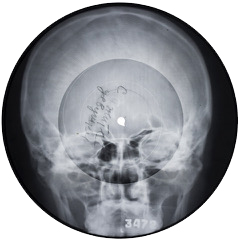 In the Soviet Union during the cold war era, the music people could listen to was ruthlessly controlled by the State. But a daring subculture of music lovers and bootleggers found an extraordinary and risky means of copying forbidden jazz, rock 'n' roll and banned Russian music to make their own records. Stephen Coates and photographer Paul Heartfield of the X-Ray Audio Project tell the astonishing story of the Soviet vinyl bootleggers with words, images and film followed by a unique demonstration of the art of cutting music to an x-ray using a 1950s recording lathe from a very special musical performance by legendary underground artist Barry Adamson.

Stephen Coates creator of the X-Ray Audio project, is a composer and music producer and founder of the band The Real Tuesday Weld.

Paul Heartfield has worked extensively in the music industry, photographing many international bands and musicians and is the portrait photographer for the Houses of Commons and Lords.

As the X-Ray Audio Project, they have been researching  the story of the Soviet X-Ray recordings in Russia and the ex-Eastern bloc for the last four years, producing a book, award winning documentary and an internationally touring exhibition.

Barry Adamson is a multi-disciplinary artist who rose to prominence as the bass player in Magazine and Nick Cave and the Bad Seeds.  His critically acclaimed solo work has seen him work with some of the film industry’s most intriguing mavericks including Derek Jarman, David Lynch, Oliver Stone and Danny Boyle. Having released nine studio albums, including the 1992 Mercury Music Prize nominated ‘Soul Murder’, he has composed music for TV series, adverts, computer games and an Olivier Award winning ballet performance.

Part of a Season of Sound, celebrating the Library’s sound archive.