Byzantines were famous for inscribing verses in and on important objects including books. In this article, Julie Boeten and Sien de Groot explore the content, function and value of these so-called book epigrams.

Medieval readers, book owners and scribes loved adding short, personal texts to manuscripts. They jotted down notes, comments, short prayers or simply their own names. Byzantine people, however, went one step further: they composed these texts as poems in metrical verses.

Byzantines were famous for inscribing verses on important objects, such as jewellery, reliquaries, frescoes and church walls. Due to their similarity with inscriptions, these poems are called “epigrams” (from the Greek ἐπι – γράφω: write upon, inscribe). As books were also considered to be precious, they were no exception to this rule: epigrams written in and on them are called “book epigrams”.

Currently, more than 9000 such epigrams have been identified. These date from the 8th to the late-15th centuries and are collected in the Database of Byzantine Book Epigrams. The diversity of this material is striking, with a great variety in terms of length (1 to 200 verses), content, language and position in the manuscript.

Book epigrams were usually written before the beginning or immediately after the end of the main text. They communicate between the inside world of the text and the outside world of the reader by summarizing or introducing the content, or by providing information on how, when, by whom and for whom the text was written.

The visual characteristics of book epigrams vary. Some are merely scribbles, whilst others are beautifully executed, written in the so-called “distinctive majuscule”, a monumental script based on inscriptions in stone. These poems have an unmistakable decorative function and can easily fill an entire folio, sometimes combined or intertwined with small figures and illustrations.

Several examples of such meticulously-inscribed, decorative epigrams can be found in the famous Theodore Psalter (British Library Add MS 19352), which has been dated to the year 1066. Amongst these is a depiction of a scene from the life of David in which he is called away from his flock (Psalm 78:70-71), which appears on folio 189v. The book epigram around which the figures are organised describes the same scene in the form of a dialogue between God, His angel and David. As such the epigram and the decoration of the manuscript are perfectly integrated. 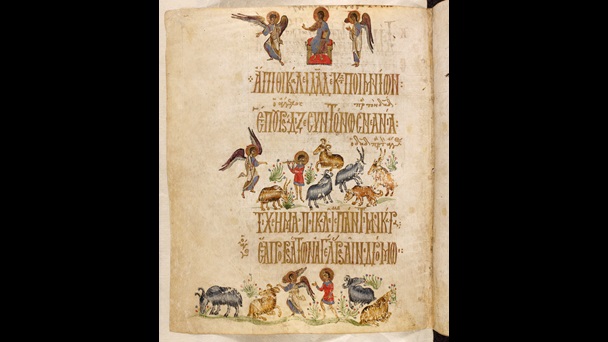 Completed in 1066, the Theodore Psalter (Add MS 19352) contains a lavishly-illuminated book epigram on the call of David by God (folio 189v).

Generally, book epigrams comment on the texts and/or the manuscripts they accompany. They are poems “in books and on books”, that is, texts physically preserved “in” the books, but their topic is “on” the books. In light of this twofold role, we can distinguish two main groups of book epigrams: those related to the texts (that is, text- and author-related), and those related to the manuscripts themselves (scribe-, patron- and reader-related).

Some text-related epigrams comment on the main text that they accompany either in the form of a paraphrase, an explanation or personal commentary on the content. Others concern the author of the main text, such as Homer, the Athenian tragedians or the Church Fathers. Writers composed texts praising these authors or short poems about their lives. These text-related epigrams are so closely bound to the specific text they accompany that they were sometimes mistakenly identified as part of the main text.

Many Homeric manuscripts contain short poems about the Iliad and the Odyssey or their author. Sometimes each of the twenty-four books of the Iliad is summarized in a hexameter (a metrical line of verse containing six feet) placed at the beginning of the book. Different sets of such verses circulated, from which the scribe could choose his favourite. We find traces of this practice in the Florentine Homer (Harley MS 5600), a 15th-century manuscript containing the Iliad, where some books are preceded by more than one such verse. 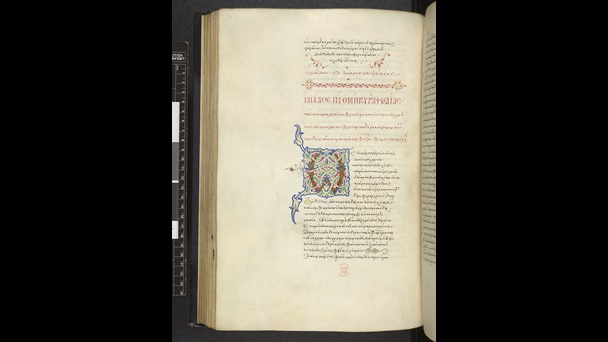 The Florentine Homer (Harley MS 5600) includes epigrams summarising and introducing the books of the Iliad.

One example is the three hexametrical summaries that precede book 16 (folio 153v):

These epigrams have the same basic function: to summarize and introduce book 16. However, the scribe seems to have been unable to choose just one and instead added a second and third, for good measure.

The manuscript also contains several epigrams praising Homer. Folio 13v, for example, is entirely dedicated to this purpose. Many of these were known from poetic anthologies, such as the famous Anthologia Palatina.  This indicates that composers of manuscripts could find inspiration in such collections of poetry instead of writing new epigrams for each occasion.

Not all authors were equally appreciated. Some epigrams on the Hellenistic tragedian Lycophron, for example, hint at the fact that the poet was obscure and difficult to read. An example can be found in Burney MS 89. The following epigram appears on folio 1r:

The works of Lycophron are described as “blind”, “invisible”, and in need of clarification by the interpretative work of Isaac Tzetzes, a 12th-century commentator. This 15th-century manuscript (Burney MS 89) is introduced by an epigram thought to have been written by Isaac Tzetzes (f 1r), who also wrote the textual commentaries.

Epigrams in this second group are mostly scribe-related, talking about scribal activity. However, others are patron-related, providing information about how the manuscript was commissioned, or are reader-related, addressing the reader directly. They tell us a lot about the scribe who copied the manuscript (name, lineage and origin) and the patron who ordered it, but also about the date of its completion. Although valuable for scholars and historians alike, care should be taken with this information, as epigrams were often copied from an existing example, without changing the names and dates.

The transmission of scribe-related epigrams is much more fluid than those which are text-related, since their formulas were often reused.  A very well-known example is the colophon “The hand, which wrote this, rots in the grave (χεὶρ μὲν ἡ γράψασα σήπεται τάφῳ)”. This was endlessly rewritten and adapted by scribes all over the Byzantine world, and even beyond. An example can be found in Add MS 28816, folio 149v. 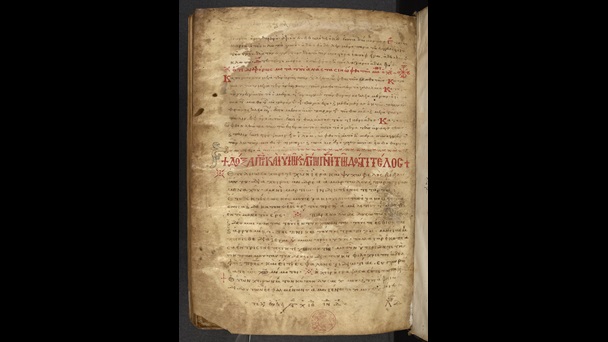 Dating from the year 1108 to 1111, this manuscript (Add MS 28816) contains the New Testament excluding the Gospels. It is written by Andreas Olenes and includes the epigram “The hand that wrote this rots in the grave” (f 149v).

The language of Byzantine book epigrams is predominantly an archaic and solemn Greek, which differs substantially from the spoken language of the time. Within the range of this archaic language, however, book epigrams show a great deal of variety, ranging from very archaic epigrams to “modernized” ones that were easier to read, even for the less educated. These differences in register are connected with the poem's metre.

By far the most popular metre for Byzantine book epigrams is the dodecasyllable (a verse consisting of twelve syllables), used in over 80% of the texts available today. Hexametric verses (composed in six metrical feet) and elegiac verses are also popular, especially in text-oriented epigrams.

Epigrams composed in hexameters and elegiacs are usually the most sophisticated ones, with a vocabulary and morphology that were probably never used in practice. Only highly-educated authors were capable of producing this kind of language. This is also reflected in the visual care taken to write down these verses, as illustrated by Add MS 22350, which contains several hexametrical epigrams beautifully inscribed in gold ink.

Outstanding amongst these is folio 7r, where the book epigram is clearly meant as a decoration. The more common dodecasyllabic book epigrams are generally less sophisticated. Some of them were clearly written by less-educated scribes and use a language which is closer to that which was spoken.

Collected works of Pseudo-Dionysius the Areopagite 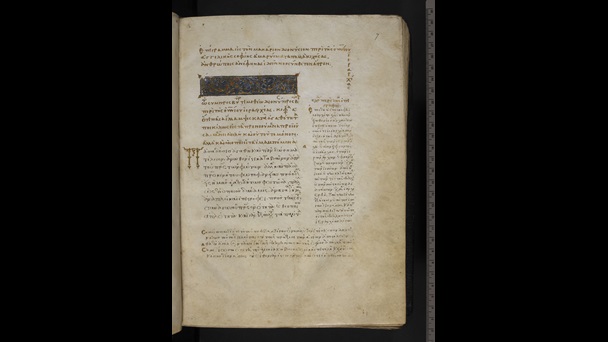 Book epigrams also often display a more spontaneous metrical or rhythmical feeling, providing an interesting insight into how these metrics worked in the minds of the Byzantines themselves. They show us that the difference between poetry and prose was not always as clear-cut as we might assume today. Certain epigrams start off in metre but lapse into prose along the way, while others at first sight seem to be prose but on closer inspection have some metrical features.

Book epigrams are intimately related to the production of literary texts and manuscripts. They often provide us with valuable contextual information such as the name of the scribe, the year in which the manuscript was executed and the workshop in which it was produced. One of the most frequent facts to be gleaned from book epigrams, however, is the name of the patron, which allows us to situate the manuscript in place and time, and potentially to discover the literary circle of learned people to which it belonged.

An interesting example is an epigram in Add MS 18231. On folio 87r, alongside several other epigrams, we find an acrostic poem, with the letters ΕΥΣΤΡΑΤΙΟΣ spelling out the name of the patron.

Sermons of Gregory of Nazianzus 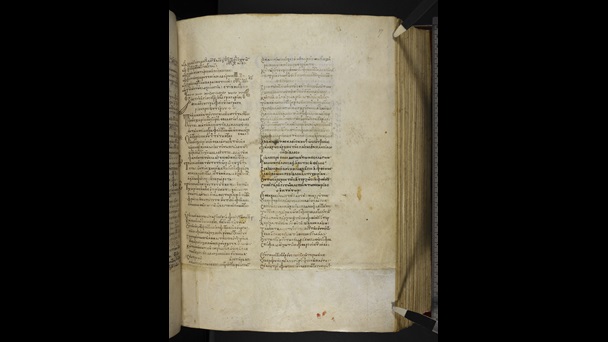 This 10th-century manuscript (Add MS 18231) was commissioned by a certain ‘Eustratios’, whose name appears as an acrostic in several epigrams on folio 87r, where he is called ‘ὁ κτήτωρ’ (‘the possessor’).

Book epigrams include a wealth of information about Byzantine texts and culture in general. They provide us with a unique insight into both manuscript production and the ways in which the Byzantine mind worked. They represent a wide-ranging history of language and literature, but they also shed light on the material world of Byzantine book production. Despite their liminal position in the volumes, book epigrams stand at the very heart of Byzantine culture.