Ann Tomalak provides an overview of the distinctive features of Byzantine bookbinding.

A Byzantine binding is not defined primarily by where or when it was made, but by how it was made. The style spread far beyond the borders of the Byzantine Empire and continued in use long after the Fall of Constantinople in 1453, so that even when a binding looks early and original it can be difficult to say when and where it was made unless the book’s provenance is known. In modern times we see hybrids that combine elements of Byzantine and Western binding, often called alla graeca. 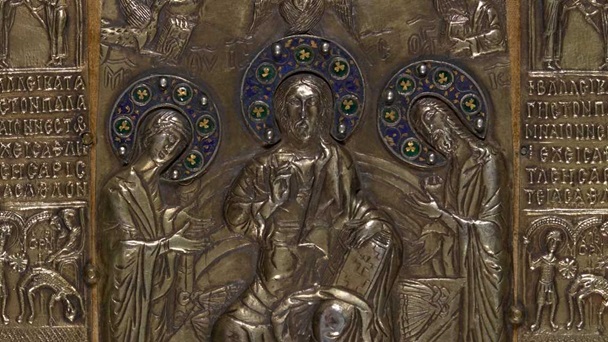 ‘Byzantine’ suggests the opulence of precious metals, ivory and jewels, yet most Byzantine books are commonplace: chunky, brownish bindings with protruding endcaps. Byzantine binding is all about function. Link-stitch sewing and flexible cloth spine linings give a good opening, which is controlled by sturdy endbands. Thick wooden boards protect the textblock and offer a strong foundation for metallic furnishings. Tight clasps ensure parchment textblocks do not cockle and also retard the ingress of scavengers, dirt, moisture and even fire. 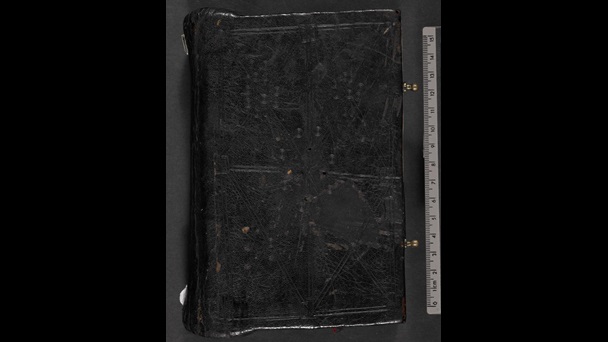 Early codices were written on parchment, though paper came into use in the Byzantine Empire earlier than the West and was bound in the same way. Sadly, few examples of early Byzantine binding exist. Many wore out over centuries of use and were replaced. Many more succumbed to the taste of later Western collectors who had their books rebound in a more decorative style or simply cut off the protruding endcaps and removed the furnishings so that they would stand upright on shelves.

Byzantine binding starts with a number of gatherings of parchment or paper bearing text. Some scribes left the first and last leaves of the textblock blank to act as endleaves. Elsewhere, the binder seems to have hooked a blank leaf around the first and last gatherings as protection. A few books lack endleaves entirely. Redundant sewing holes suggest the gatherings were tacketed, temporarily held together with loops of thread or parchment strips for the scribe’s convenience.

Since the books were sewn with a single needle and thread, there was no requirement for paired sewing stations, as in Coptic binding. In fact, odd numbers are often seen. Two are placed close to the head and tail (the change-over stations); the others may be evenly spaced either in relation to these change-over stations or to the head and tail of the textblock, the latter giving more closely spaced stations at the ends of the spine. V-shaped notches are cut into the spinefolds at these positions, so that the sewing is recessed and the spine remains flat.

The gatherings are joined with an unsupported link stitch, which in its simplest form, looks like rows of chain stitch across the spine. However the sewing is often reinforced by dropping back by more than one gathering. The thread, usually linen or hemp, is occasionally doubled up but most often re-plied to a suitable thickness (0.5 to 2mm). 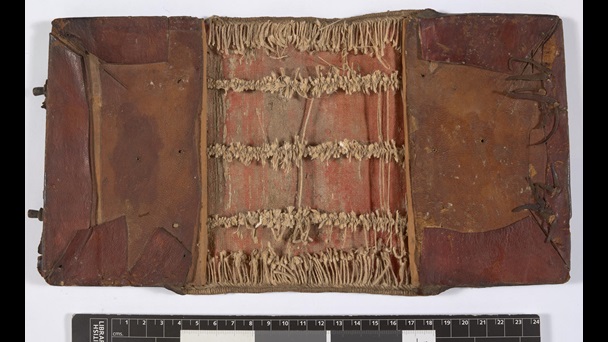 One essential characteristic of Byzantine binding is that the boards are attached to the textblock with thread, either directly as part of sewing the textblock or by first making a thread ‘yoke’ with a set of hinging loops at the board edge. Books are generally sewn in two halves, from each board towards the centre, where they are joined with a figure-of-eight link stitch. The advantage is that the two board attachments are identical and equally tensioned.

The kind of wood used for the boards varies, depending on local availability; poplar is common. Modern binders prefer cross-cut seasoned hardwoods like oak for stability, but Byzantine binders seemed less concerned about cupping, shrinkage or splitting, or even which way the grain should run. The boards are cut to size in pairs and prepared. At the spine edge, the outer face is frequently rounded to give the illusion of a gently curved spine. Sometimes a little wood is removed from the inner face too to accommodate the swell caused by thread running inside the gatherings. The remaining three edges are often channelled – a central V- or U-shaped groove is cut into them. This may imitate Coptic double-board binding, where two thin boards are covered separately and then joined to give a single thick board, or may be an attempt to make thick boards more elegant.

Finally the spine edge of the board is variously drilled, grooved and tunnelled in preparation for sewing. There seem as many variants of these as there were binders. The simplest, for direct board attachment, is a couple of holes drilled through the board level with each sewing station, with shallow channels to allow the thread lie below the board surface. The thread emerges from the first gathering, loops through the holes a couple of times, then returns to the first gathering and drops down to the next sewing station. A refinement has tunnels angled from the board edge to the outer face of the board, giving a closer, tighter attachment of board to textblock and a neater look to the exposed inner board. Where board attachment will be via hinging loops, a separate zig-zag board sewing provides these, the thread dropping to the next sewing station by a diagonal stitch. This is most often on the outer face where it will be protected and hidden by the spine lining and covering leather, but many are visible on the inner face. Again, the holes may be drilled from the board edge, and one or both may be angled. Occasionally, the thread is wound around the spine edge of the board. 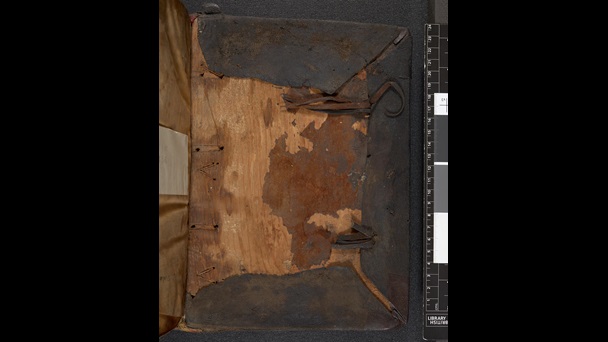 Once the book has been sewn, a spine lining of coarse cloth, generally linen, is applied, flush at head and tail but extending onto the boards by a third of their width – the edge can often be felt under the covering leather. This lining keeps the spinefolds and boards aligned. More importantly, it reinforces the board attachment and protects the threads.

In Byzantine bindings the textblock edges are flush with the boards. Marks seen on board edges suggest some textblocks were trimmed ‘in boards’ after sewing, presumably with a draw-knife. The smooth edges might be coloured or decorated, or used for titling.

Another characteristic of Byzantine bindings is the sturdy raised endband which extends onto the board edges, secured there by additional holes drilled through the board or tunnelled from the edge. This further secures the gatherings together and controls the book’s opening, with tie-downs in every gathering. The plainest are worked over two cord supports with the same thread used to sew the book, in a figure-of-eight pattern with a backward step, giving a distinctive pattern of vertical threads above, diagonal below. Another, more decorative, endband is made in two stages. A single cord is anchored to the board and textblock edge with a simple circular sewing. These warps are then woven with finer threads, often silk, in two or more colours, resulting in a chevron pattern. George Boudalis has recently identified a third type: a tablet-woven band prepared off the book, then attached to the primary endband with figure-of-eight sewing. 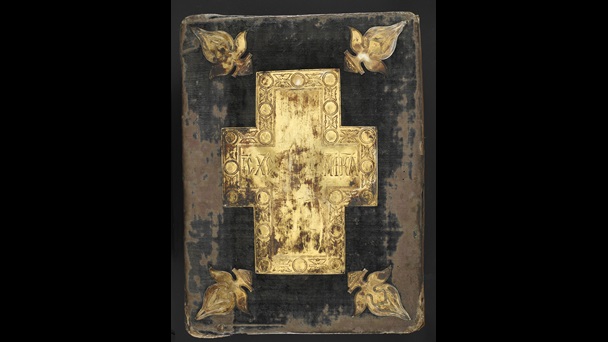 Treasure bindings may first have been covered in luxurious textiles, but all other Byzantine bindings were covered in dark-dyed leather, mostly goat- or sheepskin, occasionally calf for larger or more prestigious books. Where resources were stretched, binders re-used leather from discarded bindings or even pieced together scraps. The leather was carefully moulded into the board edge channels and around the raised endbands while wet, with an extra sliver inserted on the board edge inside the endband. Yet there was rarely any attempt to trim the turn-ins or neaten the corners, nor were endleaves pasted to the inner board. The leather was frequently decorated with blind tooling; the impressions suggest cold hand tools were pressed into damp leather, possibly immediately after covering. Any gold finishing is always a later addition or indicates an alla graeca binding.

The standard fastening consists of a metal loop (iron, bronze) attached to a three-part slit-braid leather strap. The loop catches on a metal peg driven into the edge of the upper board, while the free ends of the braids pass through holes punched in the back board and lie against the inner board. The number and placement vary. Other furnishings such as corners and central bosses were most often reserved for larger books and those for liturgical use. Many have been lost or removed and their presence is now inferred from fixing holes.

Long before books were cheap and plentiful, Byzantine binding developed to protect and keep in use valued manuscripts and, later, printed texts. The binders (often monastic) understood their materials and used local resources to craft sturdy, functional wrappers. There was little unnecessary work to beautify the binding (a little blind tooling and possibly silk endbands); the focus was on the power and splendour of the words within. Yet these inelegant, prosaic bindings preserved numerous writings that have found their way into the world’s great libraries for the use of current and future researchers, and are now recognised as worthy of study in their own right.

Byzantine books were bound in a very distinctive way. Watch Flavio Marzo outline some of the key features of Byzantine bindings, using examples from the British Library's collections.