Byzantine scribes and authors refer repeatedly to book collections and libraries. Georgi Parpulov outlines what private, monastic and imperial libraries were like in medieval Byzantium.

'Library' can mean 'a collection of books' or 'a space for reading them'. In the latter sense of the word, no Byzantine library survives: some buildings where manuscripts were stored and read may still stand, but the manuscripts themselves are invariably gone. Shortly before Constantinople fell to the Ottoman Turks (1453), a Spanish visitor to the city saw a reading room in the imperial palace:

'At the entrance to the Palace, beneath certain chambers, is an open loggia of marble with stone benches round it, and stones like tables raised on low pillars in front of them, placed end to end. Here are many books and ancient writings and histories, and on one side are gaming boards...' [1]

The palace that he visited has disappeared, and we simply do not know if other residences had similar rooms. Monasteries did not need them because monks would listen to books read out loud while eating in the refectory; evidence for this manner of dining can be found at least as early as the 9th century, and it remains common in Greek monasteries even now.

In an age when texts were copied by hand and each volume was unique, the number and type of texts available for reading varied greatly from one place to another. During the Seventh Ecumenical Council (787), most books that the assembled bishops used for reference were fetched from the Patriarchate of Constantinople, but quite a few were brought from elsewhere: churches, monasteries, even a private residence. This probably means that the Patriarchate itself could not supply all necessary titles.

Patriarch Sergios (r. 610–638) had built a library which a contemporary poet praised as 'a spiritual meadow that fills the earth with sweet smells for the soul', but in the course of a single century it burnt down twice, in 726 and 790, when most of its contents probably perished.

Particularly massive destruction ensued after the armies of the Fourth Crusade conquered the Byzantine capital (1204). In 1239–1240, the scholar Nikephoros Blemmydes found himself travelling long-distance, across the Aegean, from Asia Minor to Macedonia and Thessaly. He writes 'I spent a long time in these Western parts and worked extremely hard at the study of the books I found there; they were to be found in countless profusion, many of them difficult to find elsewhere, so much so that even the titles of some are unknown to many who have dedicated their lives to study.' [2] 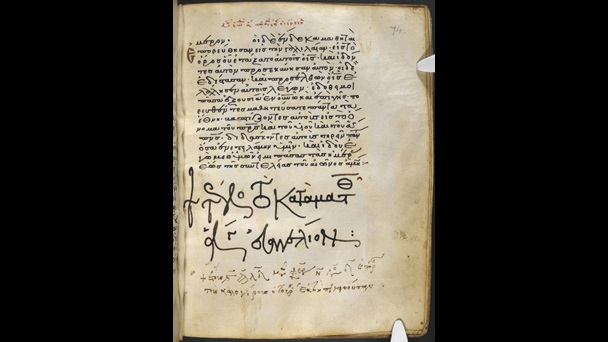 Misfortune of one sort or another was especially common in the last two centuries of Byzantium and would sometimes be recorded on a manuscript's empty pages or margins. According to a note preserved in this gospel book (above), some Turks took a group of monks from the Aegean island of Piganoussa captive in 1426. 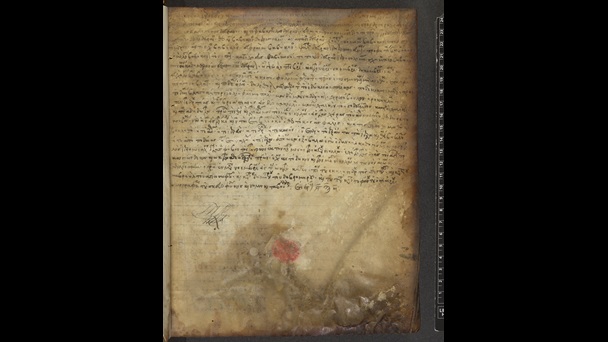 A 13th-century Gospel lectionary annotated in 1399 with a list of books and other valuables, delivered for safekeeping by the abbot Daniel to Theodore Mouzachos, Lord of Berat (Add MS 37007)

Another manuscript, a gospel lectionary from the 13th century (above) contains a note dated 1399, which lists books and other valuables that the abbot of a monastery near Berat (in southern Albania) handed over to the city's ruler for safekeeping, in case of Turkish raids. Since nine of the 23 items referred to are cheap paper manuscripts, rather than more expensive parchment ones, the monastic library seems to have been deposited at the lord's castle in its entirety. Its holdings are probably typical in terms of both size and content: all the books are religious, and at least six are for liturgical use.

Interestingly, the first item mentioned in this book list is the very volume on whose flyleaf the inventory was recorded: it is a Gospel lectionary, i.e. a selection of Gospel passages arranged for reading during the Divine Liturgy. In the eyes of the Byzantines, this was the most important book of all.

Another similar lectionary contains a list of the manuscripts owned by a church, also in Berat: this time, there are 28 volumes, nearly all liturgical: 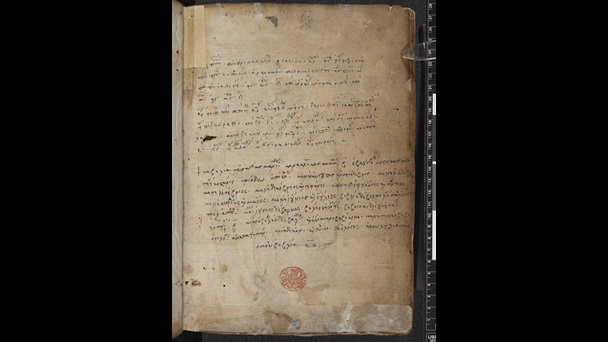 Created in Berat in 1413, this Gospel lectionary contains another book-list on its first folio (Add MS 37008)

Secluded and well-fortified monasteries could amass manuscripts in greater quantity: according to an inventory from 1200, the Convent of St John on Patmos had about 330 of them – some still found there at present.

Even when manuscripts have been dispersed, their old libraries may be recognised from ownership marks such as those in Add MS 36654 (below), which refers to a monastery in Constantinople. An additional entry on the same page records that the volume, a collection of saints' lives, was given to the monks in 1103 (evidently some years after it had been copied) by Laurentios, Bishop of Theodoropolis, 'for the remembrance of his soul and the remission of his sins'. Although pious donations of this kind are not always expressly recorded, many books are likely to have ended up at religious institutions through them – much like real estate and other valuables did. 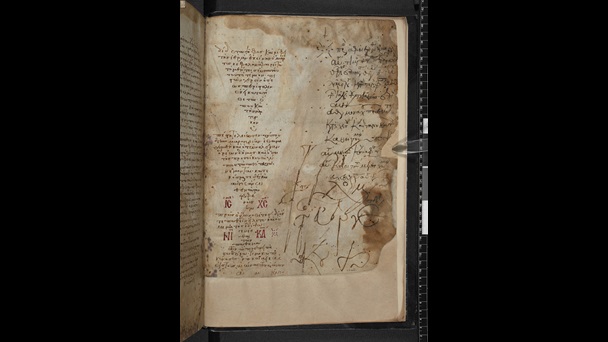 Individuals could commission new manuscripts for their own use (such as the copy of the Gospels made by the 'so-called calligrapher' Theodore for the monk Gerasimos) or buy them second-hand (as a 'humble nun Irene' did with a Gospel book that she purchased 'for the forgiveness of her trespasses'). When a book remained in private hands for several generations, blank spaces in it could be used to record births and deaths in the family, as in the case of Add MS 39585 , which contains entries in three different hands

The anonymous owner of another manuscript jotted down recipes for medicine on its last page (the writing, probably 14th-century, is clearly that of an educated person, and the book itself contains works of ancient, pre-Christian Greek literature – rather than the much more common religious texts). 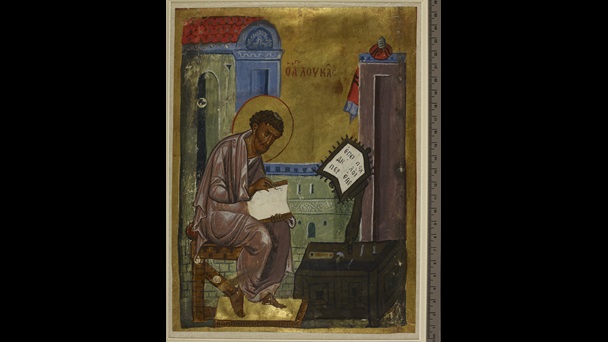 Older, pre-1600 bindings – when they survive – indicate in what position books were stored: the edges of the book block can be inscribed with the title or ornamented; there are metal bosses on the covers; the endbands (the part of the cover closest to the spine) are raised. The latter two features make it impossible to keep a book standing vertically on the shelf (as we now do), and sometimes have been eliminated. The Byzantines evidently left their books lying horizontally. It is unknown what their bookcases looked like, but they might have resembled the wooden chests depicted in front of the evangelists in this Gospel miniature (above). In contrast to the medieval West, volumes were never tied to the shelves with chains: this made them easier to borrow, steal, or salvage.

Byzantine books were bound in a very distinctive way. Watch Flavio Marzo outline some of the key features of Byzantine bindings, using examples from the British Library's collections.