Music has played a central role in Greek Orthodox services for centuries. Nicolas Bell describes the manuscript evidence for this music in the Byzantine and post-Byzantine eras.

The Byzantine Empire fostered a very rich musical tradition. The music used in church services is exceptionally well preserved in hundreds of manuscripts, while virtually nothing survives of music in secular contexts apart from verbal reports of court ceremonies and some illustrations of the instruments used in these contexts. All that is known today therefore concerns the chants sung in church, without instruments, according to traditions extending back to the origins of the Byzantine rite in 4th-century Constantinople and continuing in modified form in the Orthodox churches of today.

Although we know that much of the liturgy of the Byzantine church was from the very beginning sung rather than spoken, it was not until the 9th century that any musical notation was recorded in manuscripts containing the liturgical texts. The earliest notation consists of a simple range of signs which were used in lectionaries, books containing the Bible readings prescribed for particular services. These signs, often written in red ink, are known as ‘ekphonetic notation’, literally meaning ‘signs for sounding out loud’. They show the singer where to break between phrases, and where to change the pitch. In effect, they enable an enhanced form of recitation for the Bible reading, to aid comprehension and audibility. 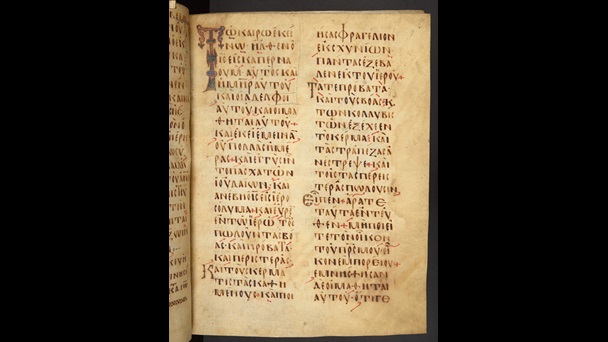 Psalms and hymns were chanted in a more elaborate way than the Bible readings, and a more sophisticated method of notation was devised to record the intricacies of their melodies. The earliest manuscripts with melodic notation date from the 10th century, and contain relatively few signs. By the middle of the 11th century, it became common for signs to be written over each syllable of text. The function of these signs, known as neumes, was not so much to show the correct pitch of a note as to convey a particular way of singing: this could be an accentuation, a change of speed or dynamic, or a particular melodic pattern or formula.

Various signs came to be used in different areas of the Empire, and collectively these early methods are known to modern scholars as palaeo-Byzantine notation. Because the neumes were not used to instruct the singer in how to perform the piece, but rather to remind him of details of a chant he already knew, they do not provide sufficient information to enable us to reconstruct the precise form of the melody with any certainty. It was only at a later date that the neumes used became more prescriptive, and that a modern transcription becomes possible. 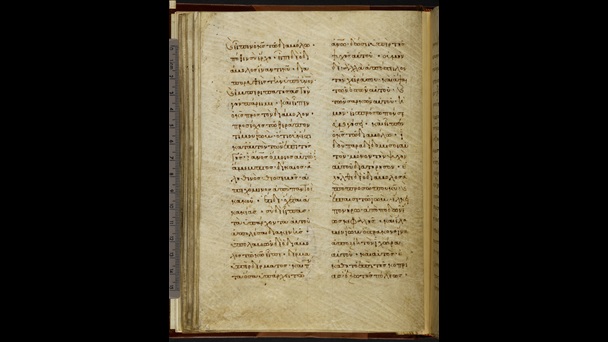 The tradition of singing the psalms had existed since biblical times. In the Eastern church, as in the West, psalms were sung according to a system of modes, each of which combined particular notes of the scale in formulaic patterns at the start and end of each verse, with a recitation on a fixed tone between them. These formulae made it easier to memorise the chant, and to associate particular melodic patterns with particular words, or even moods.

Over the centuries an increasingly elaborate repertory of hymns was composed to complement the singing of the psalms. Tens of thousands of hymns are known today from surviving manuscripts, and they form an outstanding resource in terms of the inventiveness of their poetry as well as their theological content. The hymns take several different forms depending on their placement and function in the liturgy, and allow much greater scope for melodic elaboration than the simpler formulaic methods of singing the psalms. In the earliest manuscripts these hymns were written with no musical notation, except for occasional modal designations in the margins. 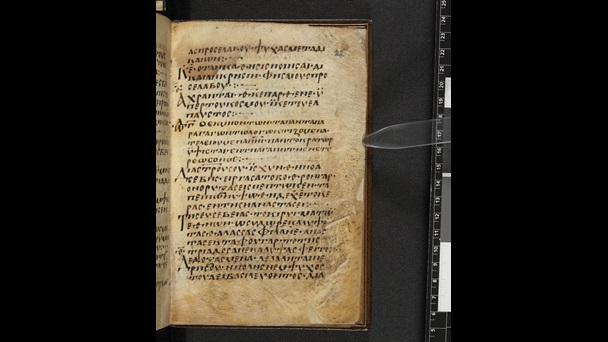 From the 12th century, a much more detailed system of notation came to be widely used throughout the Byzantine church. Because the hymn melodies were increasingly elaborate and were much more varied than the psalm formulae, the notation had to be capable of recording precise details of the movement of pitch as well as nuances of articulation and ornamentation. The resultant system, known today as the Middle Byzantine Notation, drew upon and expanded the range of neumes found in the palaeo-Byzantine schemes so that every detail of the melody could be recorded on the page.

Most of the books in which this detailed notation is found are small in format, and it is not common for them to show explicit evidence of use in performance. It seems likely that the books were intended more for reference purposes, as well as for instructing singers in how to perform the chants. For this reason, the chants are often presented in the order of their modes, so that melodically-similar hymns are found near one another, rather than in the order of the liturgical year.

Unlike Western notation on a five-line stave, the Byzantine notation does not show the pitches of notes by placing them above or below one another spatially on the page. Instead, Byzantine neumes act as a type of code, each sign indicating a movement up or down from the previous note, sometimes with a particular stress or ornament included. Since each neume shows the pitch only relative to the preceding note, a separate method is needed to define the starting pitch using a special sign, the martyria. This has a function equivalent to the clef in Western staff notation and is normally written in red ink. The martyria also defines the mode of the piece and consists of a stylised form of the letters A–D for the first to fourth modes, followed by the conventional first notes of the mode. The actual melody is then shown with neumes above the syllables of the chant text, the first pitch defined by its relation to the formula in the martyria. 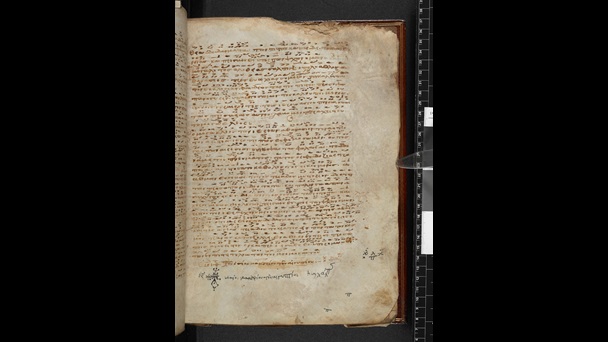 The main repertory of neumes may be divided into somata (‘bodies’) and pneumata (‘spirits’), the former signifying a step up or down a tone or semitone and the latter a leap of between a third and a fifth. The ison indicates the repetition of the previous note. Within these categories there is a great range: for example, there are six different signs for an ascending tone, each implying a difference in enunciation. The notation grew over the years to become a system of considerable sophistication, but also great complexity. Additional ‘great signs’ (megala semaia) were added in red ink in combination with the basic repertory of neumes to convey other nuances, the meaning of some of which is no longer possible to ascertain. 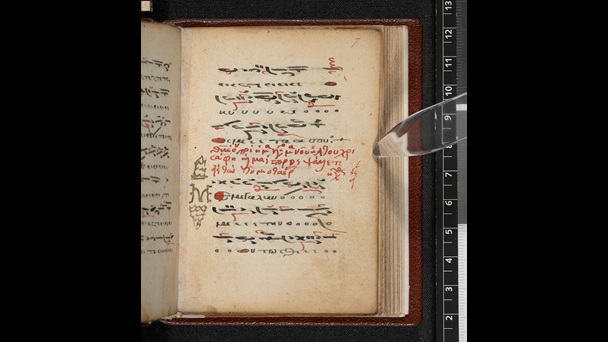 The expansion in the range of signs coincided with a new florid style of composition, known as ‘kalophonic’ (beautiful-sounding) chant. In a departure from earlier practice, composers came to be named in the chant-books, among the most famous being Ioannes Koukouzeles at the end of the 13th century and Manuel Chrysaphes the Lampadarios in the middle of the 15th. Chants became so expansive that a single syllable of the text could be repeated over several lines of music. This style, known as melismatic, made it increasingly difficult to hear the words of the chant.

As a consequence of this perceived decadence, in 1814 a systematic reform of the neumatic notation took place under the auspices of Chrysanthos of Madytos. The result was a much simplified version of the older notation, but one which also acknowledged the existence of chromatic intervals. This ‘Chrysanthine notation’, also known as the ‘New Method’, remains in use in Orthodox churches to this day.

List of Greek musical manuscripts digitised by the British Library