The teaching of Greek in English schools developed slowly and not without setbacks. Matthew Adams tells the story of how Greek spread in 16th-century England.

At the beginning of the 16th century less time was spent on the study of ancient Greek than on Latin, which in that period was learnt for conversation as well as for reading, while Greek was learnt purely for reading. Today, Greek still remains the second classical language taught in English schools. Winchester, Eton and St Paul’s can justifiably claim to have been among the first schools to teach Greek on a regular basis, though to ascertain which was actually the first is a more difficult issue.

William Horman was headmaster of Eton between 1486 and 1495, and then of Winchester from 1495 to 1501. In 1519 he published his book Vulgaria, which contains a number of references to Greek, indicating that it was probably taught at Winchester before the end of the 15th century, but this cannot stand as evidence in its own right. The evidence for the early introduction of Greek at Eton College is stronger.

First, what Horman’s Vulgaria shows to be likely for Winchester must also be likely for Eton, as he was headmaster of both schools. Second, in a letter to Cardinal Pole written in 1556, Sir Thomas Pope, founder of Trinity College, Oxford, says: ‘I remember when I was a yong scholler at Eton, the greeke tongue was growing apace: the studie of which is now alate much decaid.’

Pope, born c. 1508, cannot be referring to a date before 1515, the year Robert Aldrich became headmaster of Eton. If we combine the evidence gleaned from Pope’s letter and from Horman’s Vulgaria, we may conclude that Greek was probably being studied at Eton during Horman’s headmastership, 1486–95, and certainly during Aldrich’s headmastership, 1515–21.

At St Paul’s School, the statutes of 1518 required a High Master who was ‘a man hoole in body honeste and vertuouse and lernyd in good and clene laten litterature and also in greke yf suyche may be gotten’. The school’s founder, John Colet, insisted that the Master should ‘teche all way that is best and instruct the chyldren in greke and redyng laten.’

It is doubtful that Colet would have mentioned a subject which was not being taught, and Greek had probably been taught at his school since it opened in 1510, for the school had the supremely educated William Lily as its first High Master. John Clement and Thomas Lupset – successively lecturers in Greek at Oxford University – were both taught by Lily, a fact which strengthens the claim of St Paul’s School. Even so, at this remove it is difficult to ascertain which one of Winchester, Eton and St Paul’s was the first to introduce Greek into the school curriculum.

The absence of Greek

The teaching of Greek was apparently spreading, but no one school specifically names a Greek author to be taught. In 1528 Cardinal Wolsey wrote to his newly-established school at Ipswich. In his letter – the first surviving detailed school curriculum of the English Renaissance – he names Latin authors such as Terence, Virgil, Caesar, Cicero, Ovid and Horace. Wolsey makes no mention of Greek: regardless of the apparent advances in Greek studies in England over the previous 30 years, Wolsey does not wish the subject to be taught at his new school.

In 1552 Edward VI visited Winchester College and was given a book of 42 Latin verses composed by the schoolboys themselves.

At the end of the book is a 20-line poem in Greek iambics, signed in Greek by the pupil-author Thomas Stapleton. This single Greek poem is placed at the end of the book, as if out of the way; the Greek is in a poorly-written hand and the page looks less impressive than the high quality of its Latin predecessors.

Two years later King Philip of Spain married Queen Mary at Winchester Cathedral, and the royal couple received a book of gratulatory verses (Royal MS 12 A XX) from the boys at the College. Critically, every single one of the 25 poems is written in Latin and there is nothing in Greek. Why? Had Thomas Stapleton left the school? This paucity of Greek reveals that there was little, if any, Greek of quality being taught at schools in the middle of the 16th century.

The danger of Greek

Greek’s virtual disappearance from the classrooms of English schools between the 1520s and 1560 followed the publication of Erasmus’ Novum Testamentum at Basel in 1519. Erasmus edited the Greek of the Gospels and added a facing Latin translation, making the Greek version available to a wide readership. Knowledge of Greek became dangerous and heretical, and its study was a challenge to the authority of the Church. In the 40 years following Erasmus’ publication, 25 academics and students of Greek from Cambridge (Erasmus’ alma mater) were burnt at the stake for heresy, others were pursued by the agents of Thomas More, yet others went into exile.

The absence of Greek studies in schools can be explained by the absence of texts; and texts were not printed because association with Greek in the mid-16th century was too dangerous until the accession of Elizabeth I in 1558. In 1559 Protestantism was established as the religion of England and Greek was now studied freely: in 1566 one George Etheridge composed a Greek encomium for Elizabeth in the unsuccessful hope of finding employment. 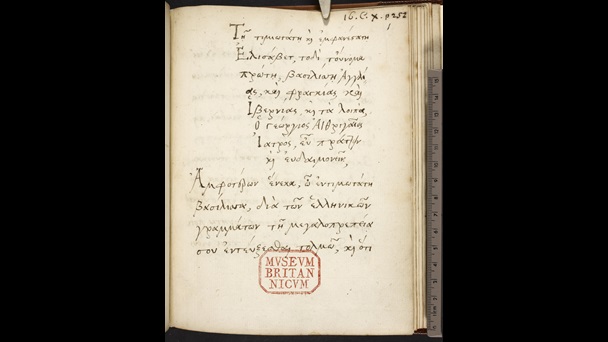 In 1563 Elizabeth visited Eton College and received a presentation book of verses. All the poems are in Latin, with the exception of four lines of Greek elegiacs on the reverse of the title page, written by the headmaster William Malim.

Verses to Elizabeth I in Latin and Greek

A decade later Elizabeth visited St Paul’s School, and received a book of 21 poems, 17 of which were written in Latin, and four in Greek.

Complimentary verses to Elizabeth I 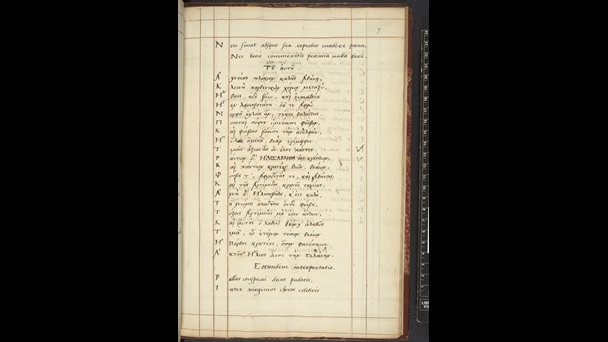 Complimentary verses to Elizabeth I by the High Master and boys of St Paul’s School, c. 1573 (Royal MS 12 A LXVII)

These two presentation books, 10 years apart, show the beginnings of a renascent Greek learning, not only at St Paul’s, but at other English schools as well.