Illuminating the Psalms in Byzantium

Byzantine book illumination was at its most ambitious and innovative in the decorated psalters produced between the 9th and 11th centuries. Here, Kalliroe Linardou explains the two main types of illuminated psalters and describes some of their key features.

A psalter is essentially the Book of Psalms, a book of the Old Testament that during the Middle Ages was accessible in two main formats: either as part of a complete bible or as an independent volume. The Psalms – a corpus of canticles or songs, originally composed in Hebrew and assembled over a period of seven centuries – were supposedly authored by King David, an ancestor of Christ. As a result, David’s image featured prominently in illuminated psalters.

Medieval manuscripts of the Psalms were used in the church during the performance of the Divine Office (liturgy), as well as in private contexts, mainly as a textual and/or visual aid that facilitated the devotional practices of the laity. They therefore often included other subsidiary texts, especially the Canticles or Odes (hymns taken from biblical texts other than the Psalms). Additionally, psalters often included sumptuous illumination. Numerous examples of decorated or plainly executed psalters survive from the 9th to the 15th century. They are evidence of the popularity of the Psalms amongst medieval men and women who studied them intensely and intimately.

The Byzantines, like Christians in western Europe, valued the psalter highly and produced beautiful and sophisticated illuminated manuscripts of David’s songs for rulers, clerics, abbots and monks, as well as for lay noble patrons. Byzantine illuminated psalters fall into two distinct categories according to how the images are incorporated into the manuscript. Produced in the Monastery of St Sabba near Jerusalem around 1090, this aristocratic psalter contains eight full-page miniatures (Add MS 36928)

Psalters designed to include full-page miniatures customarily featured either portraits of the purported authors of the Psalms and Canticles or scenes from their lives. These were either clustered together at the beginning of the volume or interspersed within the book prior to the opening of each section. These books are known as aristocratic psalters. The diminutive aristocratic psalter Additional 36928 is a typical example of this kind of manuscript. Dated to around 1090 and produced in the Monastery of St Sabba, near Jerusalem, it contains the Psalms and Canticles, and bears a series of eight full-page miniatures, much rubbed but still visible today. The size of the book indicates that it was commissioned for private use. Six scenes designed to introduce the Book of Psalms narrate key episodes of David’s life. On f. 44v in particular, David is depicted serenading his flocks accompanied by the female personification of Melodia (Melody) who rests comfortably by his shoulder. The image serves as both a reminder of the humble beginnings of the future King and a visual indication that the Psalms were composed as songs.

An altogether different mode of decoration is exemplified by a group of Byzantine illuminated psalters known collectively as marginal psalters, where images fill the margins surrounding the main body of the text. They were designed with particularly ample margins in order to accommodate free-standing marginal illuminations as close as possible to the verse of the Psalms that inspired them. The earliest surviving examples of marginal psalters date from the 9th century, and they continued to be produced throughout the middle and late Byzantine period. The relationship between 9th-century marginal psalters and later specimens has long puzzled scholars. We should remember, however, that medieval illustrated manuscripts were ad hoc creations, each time adjusted to serve the needs and tastes of their commissioners, despite the similarities they might share with earlier volumes.

These two distinct modes of decoration, full-page miniatures and marginal illuminations, unavoidably determined the narrative relationship between text and images. Marginal psalters are far more likely to combine scenes unrelated to one another on a single page than are psalters with full-page frontispieces, and are less concerned with providing a continuous narrative. Illuminations in marginal psalters tend to be dependent on the text of the Psalms; the meaning of individual scenes or images grouped together on a single page is incomprehensible if taken out of the relevant textual context. Thus, one of the most distinctive features of Byzantine marginal psalters is their use of the marginal format to create a sort of visual commentary on the Psalms, a parallel to the textual marginal commentaries found in other biblical manuscripts.

A literal visual interpretation of the Psalms was the most common choice of illumination. This could be done simply, or with incredible complexity. However, the Psalms themselves, besides speaking of the Lord and his people, often refer to specific events and people mentioned elsewhere in the Old Testament. Thus, in the marginal psalters there are a number of images depicting specific Old Testament figures or events. A third approach to illustrating the marginal psalter was based upon typological interpretation. Typology involves pairing an Old Testament event or figure mentioned in the text with a New Testament event or person depicted in the margins. The former is viewed as a pre-figuration of the latter, and the latter as the fulfilment of the former. This was a familiar and popular interpretative approach to the Scriptures during the Middle Ages, and was found not only in marginal psalters but also in other literary and artistic productions.

Marginal psalters in the British Library

The British Library houses two of the most important surviving marginal psalters from the 11th century, the Bristol Psalter and the Theodore Psalter. 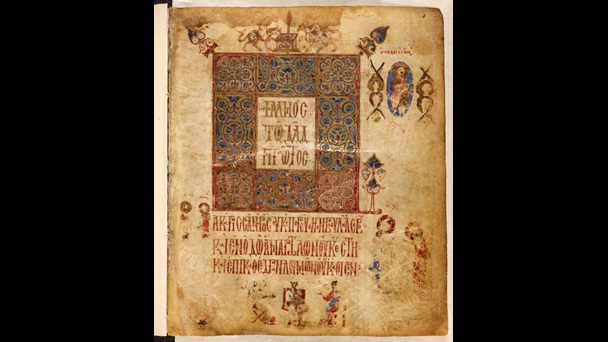 The Theodore Psalter is a marginal psalter completed in 1066 by the scribe and artist Theodore, a monk of the Studios Monastery in Constantinople (Add MS 19352)

Most psalters contain no specific information regarding their commission and original recipients. Fortunately, the Theodore Psalter is an exception, as it contains a long colophon (signature) at the end of the manuscript. The colophon tells us that the scribe Theodore from Caesarea, a monk of the Studios Monastery in Constantinople, made the book for Abbot Michael in 1066. The manuscript was sumptuously illustrated throughout with marginal images that give us a rare insight into an abbot’s reading of the Psalms. For instance, on f. 1r, the initial letter M for the Greek word Μακάριος (Blessed) that opens the first Psalm is shaped to include Christ and the Blessed Man who is the subject of the opening verse. Both of them are repeated on a bigger scale on the right corner of the margin. The bottom margin has been meaningfully reserved for the ungodly sinners and evil men mentioned in the Psalm, who are gesticulating vividly in disagreement. On the top right margin, Christ is represented as the Ancient of Days – an iconographic convention that introduces Christ as the God of the Old Testament – supervises all human affairs from the skies and visually fulfils all prophesies and promises that will be expounded in the following pages. The Bristol Psalter, made in the 11th century, is a marginal psalter that also contains full-page miniatures in the manner of aristocratic psalters

The designers of the Bristol psalter – a diminutive book most certainly made for private use and classified as a marginal psalter sharing common features with the aristocratic psalters – took an altogether different approach to the opening of the book and the illustration of David’s text. On f. 7v, the book is introduced by a full-page portrait of David seated and surrounded by five musicians holding recognisable musical instruments, in a manner familiar to us from aristocratic psalters. On the facing folio (f. 8r), the opening of the Psalms is illustrated by a single image on the bottom margin. The pious man, with whom the anonymous recipient of the psalter would certainly identify, is represented by his desk with a book opened in front of him meditating the law of God day and night (Ps 1:2) prescribed by the Psalm, while two female personifications of Day and Night identified by inscriptions, visualise the passing of time mentioned in Psalm 1.

Byzantine illuminated psalters are so much more than mere picture-books. They provide us with an excellent opportunity to study the many sophisticated approaches used to establish meaningful links between text and image. They also offer us a valuable insight into the private sphere and the most intimate hopes and fears of their owners.