The Greek language in the Latin West

After late antiquity, knowledge of Greek declined in Latin-speaking Western Europe. Although Greek would not be taught widely in the West again until the Renaissance, a number of manuscripts indicate that there was interest in learning about Greek letters during the Middle Ages, as Cillian O’Hogan explains.

Graeco-Roman antiquity was a world of many languages. The majority of the inhabitants of the Roman provinces probably spoke at least two languages: their own native language (such as Gaulish or Egyptian), and the dominant administrative language of their particular region: Greek in the Eastern parts of the Empire, and Latin in the West. Educated individuals and those aspiring to careers in public service were expected to have good knowledge of both Greek and Latin, regardless of where they lived.

Though there had always been a certain linguistic and cultural separation between the Latin-speaking Western part of the Roman Empire (covering Spain, Gaul, Britain, and Italy, as well as the western parts of North Africa), and the Greek-speaking Eastern part (covering Greece, Asia Minor, and Egypt), this divide was made permanent by the Emperor Theodosius’ decision to have each of his sons inherit one half of the Empire on his death in 395. After this event, and the rapid decline of the Western Empire over the course of the 5th century, contact between the two regions became less and less frequent. One consequence of this was a decline in knowledge of Greek in the West, and of Latin in the East.

It is common to speak of the ‘rediscovery’ of Greek in the Latin West in the Renaissance, the implication being that Greek was wholly forgotten in the West for the bulk of the Middle Ages. While it is true that Greek was far less well known in the West between the 5th and 15th centuries, throughout this period we find evidence of knowledge of Greek on the part of a few learned individuals, and awareness of the significance of Greek on the part of many more. In the 7th century, the Greek-speaking Theodore of Tarsus (602–690), travelled to England to take up the role of Archbishop of Canterbury.

It is worth emphasising that when speaking of knowledge of Greek in the Middle Ages, we derive our information from written evidence. We know very little of whether or to what extent people in the West could actually speak Greek. The sense we get from our sources is that interest in Greek in the Latin-speaking medieval West was mostly confined to religious and scholarly contexts. There appears to have been little interest in using Greek for the purpose of communication. Equally we should consider what we mean when we speak of knowledge of Greek or indeed any language. Does this mean simply the ability to write the alphabet? To read and understand a short document? Or to read and understand the Homeric poems? These things presuppose very different levels of fluency.

Some awareness of the Greek alphabet was relatively common in the Latin West. After all, it was widely known that the New Testament had originally been written in Greek. Moreover, many of the texts popularly copied in the early medieval West contained references to Greek scholarship and literature. The works of Cicero, for instance, frequently quoted short excerpts from Greek, while the poems of the Christian Latin author Prudentius, hugely popular in the Middle Ages, mostly had Greek titles. In both cases these are occasionally found written in Greek letters, but more often transliterated into Latin. A particularly striking example of Latin transliteration is in the 9th-century Athelstan Psalter, which contains, on its final two folios, the Greek litany and prayers transliterated into Latin letters. 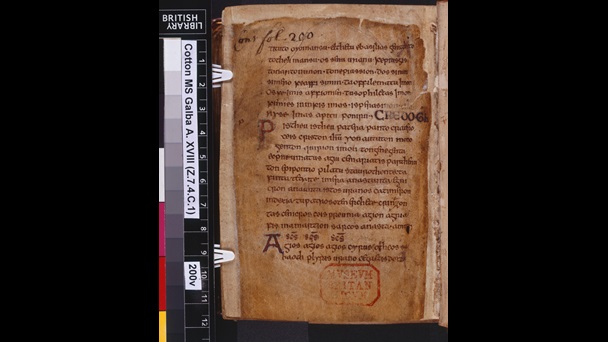 From the Carolingian era in particular we have very many glossaries, dictionaries, and grammar handbooks, apparently used by Latin speakers in the West to teach themselves Greek. The quality of these books varies widely, both in terms of their contents and how they were copied. However, taken as a group they can provide valuable insight into how and for what reasons Greek was studied in the 8th and 9th centuries. Many of these works are versions of texts originally written in antiquity, and in some cases it is clear that their initial purpose was to assist Greek-speakers learning Latin, rather than the other way around. This is especially clear in the case of word-lists, which are often simply reversed from Latin–Greek to Greek–Latin. 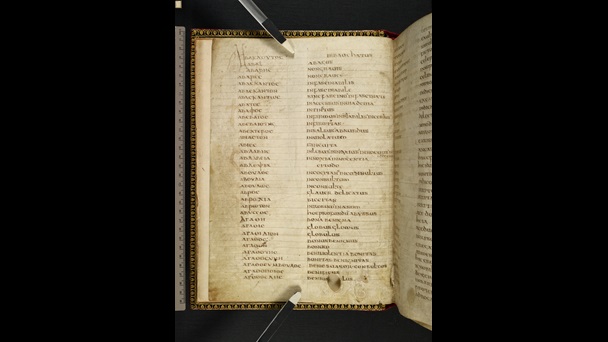 The Greek–Latin glossary of Pseudo-Cyril is organised alphabetically. Multiple entries are included for different forms of adjectives, e.g. ΑΓΑΘΗ and ΑΓΑΘΟΣ (both meaning ‘good’) on this page (Harley MS 5792)

Other aids to understanding Greek come in the form of idiomata, lists of words in which grammatical rules differ between Greek and Latin. An example would be a list of Latin nouns whose corresponding Greek terms are of a different gender.

The Hermeneumata are perhaps the best-known evidence from the medieval West for the study of Greek. They survive in many varying versions, but generally include alphabetised glossaries, lists of words organised by topic, simple texts (such as fables) for reading comprehension, and colloquies: short texts describing everyday life, mostly in dialogue form. The individual components of the Hermeneumata date back to the schools of late antiquity, and it is clear from the scenes described in the colloquies that they were originally used by young children, probably in their first year at school. 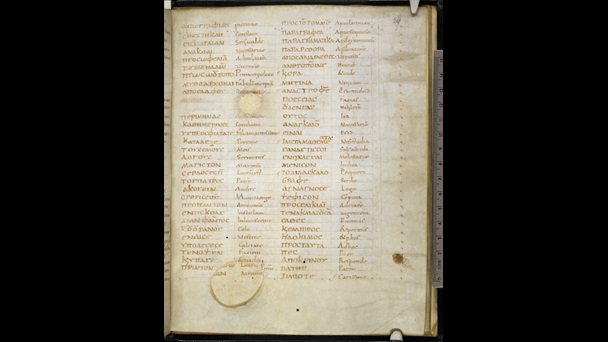 This manuscript contains the so-called Colloquium Harleianum, as well as many other educational texts. Although a single scribe copied both Greek and Latin texts, it is clear from numerous slips in the Greek that he did not know that language particularly well (Harley MS 5642)

Certainly there was not widespread knowledge of Greek among intellectuals in the Latin-speaking West before the Renaissance. Nonetheless, it is clear from the many manuscripts that survive that quite a few western scholars made efforts to learn Greek, and at least some of them succeeded.