A wide range of manuscripts contain the writings of early Christian theologians. Here, Peter Toth offers some guidance to this often complicated body of material.

The term Church Fathers, or Fathers of the Church, refers to Christian theologians of the first millennium who, just like fathers of a child, were thought to guide, educate and instruct the Christian church with their teaching and writings. Church Fathers are not necessarily saints of the Orthodox or Catholic churches. There are many well-known writers who have never been canonised and were not even ordained as priests, monks or bishops, but who nonetheless by their writings have played a decisive role in the history of the Christian church.

As meticulous interpreters of the Bible and Christian doctrine, the Church Fathers had a decisive role in defining Christian identity against non-Christians as well as against other Christian thinkers they considered heretics. Due to this key role in distinguishing between ‘right’ and ‘false’, ‘orthodox’ and ‘heretic’, the writings of the Fathers – the so-called patristic heritage – became the most important cornerstone of Orthodox and Catholic Christian tradition after the Bible. No wonder, therefore, that the number of Greek manuscripts preserving such ‘patristic’ writings outnumbers the extant manuscripts of secular authors.

This extremely large and diverse ‘patristic legacy’ has reached us in various collections and compilations that can be divided into three categories:

Although collections containing works from the same church father survive in a great number of Greek manuscripts, their origin and history has just started to be explored. Some of them, such as the large body of authentic and spurious works attributed to the 2nd-century Justin Martyr (Additional 82951), are probably later scholarly compilations.

There are, however, many other compilations that go back to a much earlier period and sometimes even to the authors themselves. Such an interesting and early collection is the standard selection of works from St Gregory of Nazianzus (c. 329–389?). Having acquired a remarkable knowledge of classical Greek literature of his age, Gregory became archbishop of Constantinople in 379 and played a key role at the Second Ecumenical Council held there in 381. Fighting against various heresies of the 4th century, he left a large body of theological writings (pamphlets, sermons and poems) that has come down to us in a carefully organised collection of a very early age.

Sermons of Gregory of Nazianzus 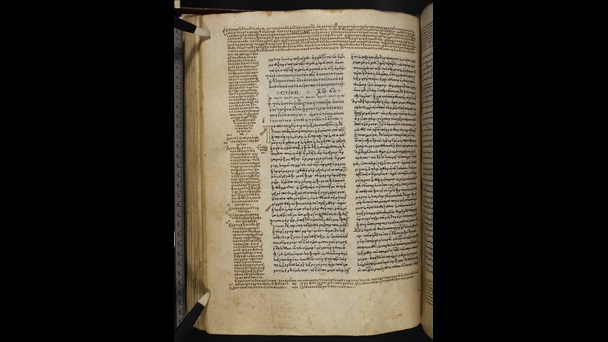 Because of their excellent Greek, Gregory’s works were often used as a teaching aid of style and writing in Byzantine schools. This copy was heavily annotated over the centuries (Add MS 18231)

An even larger number of patristic collections had a different scope. Instead of taking the author as an organising principle, these compilations bring together opinions and views from a variety of Church Fathers to clarify and expound upon one or more specific subjects. These subject-oriented collections served various purposes. The most important are liturgical and exegetical collections.

These usually include sermons (homilies) by a number of Church Fathers from a wide variety of time periods and places. They are arranged as readings for various feasts in the order of the liturgical calendar. 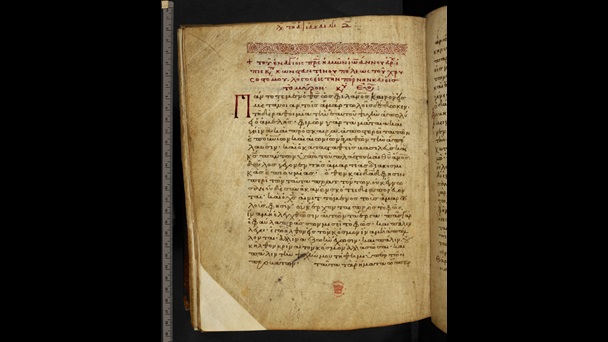 The reading for Holy Wednesday is recorded at the top of the page with red ink. The text is a homily attributed to John Chrysostom relating to the reading for that day (Add MS 14066)

These comprise extracts from an exceptionally wide range of authors according to the order of biblical books and passages, often arranged as a marginal commentary around them. As the main purpose of these compilations was to provide the most complete and useful manual of biblical interpretation, the actual authorship of the extracts included was not always important. Compilers felt free to use excerpts even from suspicious heretic authors, many of whose lost works are now known only from these exegetical collections. In the case of Burney 34, for instance, heretical authors such as the 4th-century Diodorus of Tarsus and Acacius of Caesarea are included alongside more orthodox names. 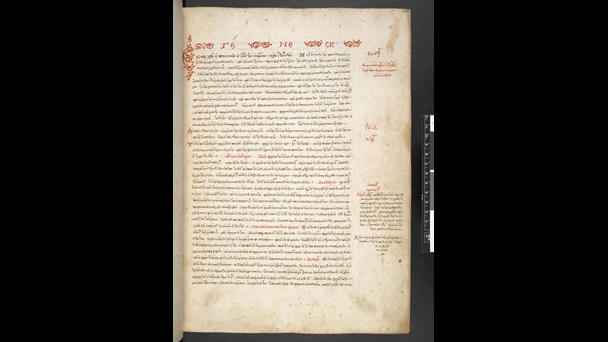 Many extracts from patristic authors and works are collected here under the heading: ‘In the beginning God created heaven and earth’ (Gen. 1:1), written with larger letters at the top of the page (Burney MS 34)

The most intriguing type of patristic collection is probably the one that combines both the author- and the subject-oriented scope and contains selections on specific subjects with a marked emphasis on the provenance and author of the extracts.

The most common representative of these ‘mixed-type’ collections of patristic works is probably the extremely popular genre of dogmatic excerpts, known as anthologies or florilegia. These assemble quotations from various authors to illustrate the orthodoxy of theological ideas and concepts not only by gathering texts that mention them, but also by emphasising their attribution to some prominent and widely respected church authorities. Many of the most fitting and convincing arguments, however, derived from obscure, forgotten or even ‘heretical’ authors, whose real names would not have helped the case at all. The compilers, therefore, re-named these authors and re-ascribed their extracts to well-known and orthodox fathers. This has resulted in the creation of a large number of fascinating pseudonymous texts that still await proper identification and attribution. The vast numbers of patristic manuscripts and the fluidity with  which these texts were excerpted, rearranged, and quoted, means that there is a great deal still to be done in this area. 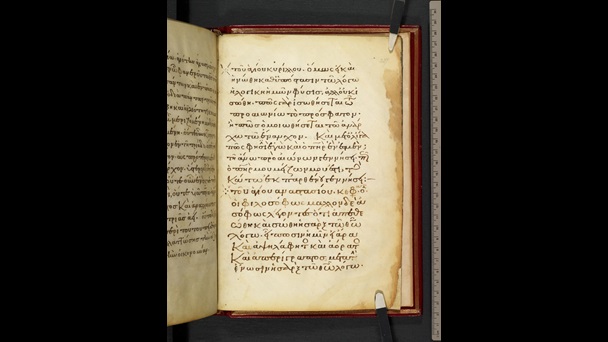 Preserved at the end of a Gospel-book are excerpts from a work on the indefinability of Christ’s body. The excerpts are attributed to the 6th-century Anastasius of Sinai, but this still awaits further confirmation (Add MS 5112)