Byzantium’s interactions with other cultures – both East and West – is made clear from the multilingual nature of many Greek manuscripts. Peter Toth explores this aspect of Byzantine book culture.

The Byzantine world was never exclusively Greek-speaking. It always remained a complex mix of various cultures and languages. This linguistic diversity is richly reflected in the many multilingual Greek manuscripts preserved. Manuscripts containing texts in Greek and in one or even several other languages simultaneously are especially intriguing: they bear witness to both general world-wide historical developments and particular deeply personal histories of their users and readers. 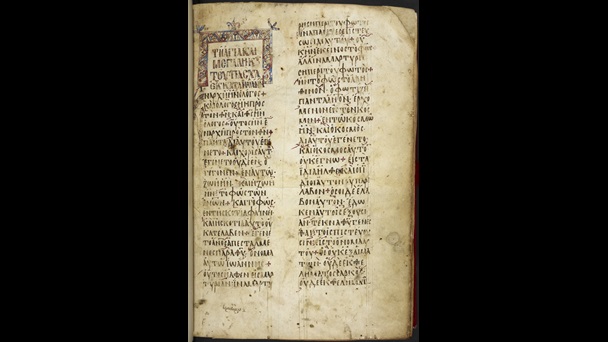 This Gospel Lectionary, written in Cappadocia in 980, contains the Georgian word for ‘Gospel’ on its first folio (Add MS 39602)

Many Greek manuscripts were imported and used in another country and therefore, beside their original Greek text, they contain additions in one or more other languages alike. A 10th-century Gospel-book, for example, contains additions in Georgian, and another one from the 12th century has Arabic annotations. 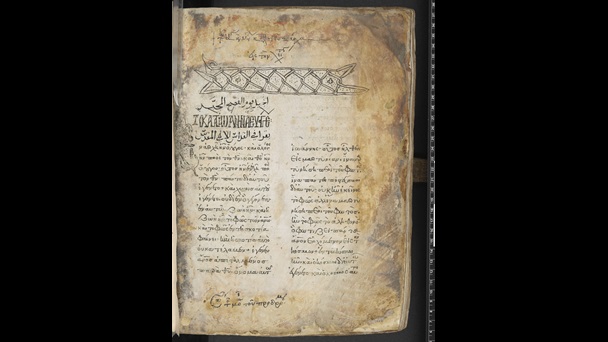 The most obvious practical reason for producing multilingual manuscripts, however, was the specific demands of a particular multicultural area, like that of early medieval Egypt. After its conquest by Alexander the Great in the 4th century BCE, Egypt had quickly become a bilingual country with Greek used in administration, literature and education, and the local Egyptian (Demotic and later Coptic) in all other everyday communication. This bilingualism persisted for more than a millennium in Egypt and was changed only after the Arab conquest in the 7th century CE. Then a new tongue, Arabic, had to be accommodated, and for the next few centuries the financial and legal administration of the country was managed in three languages, Arabic, Greek and Egyptian (Coptic). 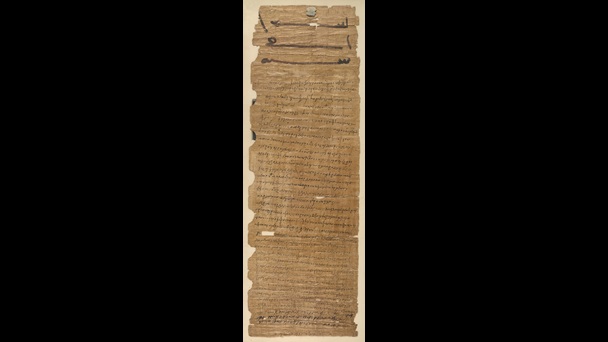 A contract recording the sale of a building in the town of Djeme in Southern Egypt in the year 758 CE, containing text in Arabic, Greek, and Coptic (Or 4872)

This papyrus (above), dating from 758 CE, is a nice example of this practical trilingualism. The text begins on the top of the page with the date (protocol) written in an elegant Arabic (Kufic) script as 'In the name of Allah, the compassionate, the merciful', which is immediately followed by the usual Christian heading in Greek as 'In the name of the holy and life-giving Trinity in one essence, the Father, the Son and the Holy Spirit', which, a couple of lines later, gives place to the practical details of the contract written in the local Egyptian (Coptic) language in Greek characters.

This papyrus is one of the hundreds of trilingual legal, administrative and liturgical documents we know from 7th–9th-century Egypt. Its threefold Arabic, Greek and Coptic structure reflects the standard trilingual practice of a world, where speaking and writing these three languages simultaneously was an indispensably practical part of everyday life.

In order to acquire such working knowledge, elementary Greek, Latin and later Arabic became a part of primary and secondary education. There were word-lists, grammars and dictionaries, compiled to fulfil these practical needs of elementary teaching but there were always individuals who wanted to go beyond this level to read and study texts in other languages. It was for their sake that multilingual 'study editions' were produced. The main target of this scholarly interest was always directed towards religious, legal or to a lesser extent literary texts that were particularly important in the given period. One of the most significant of these in the Middle Ages was the Bible, and in particular the Old Testament.

Written originally in Hebrew and first translated into Greek in Egypt about the 3rd century BCE, the various translations of the Bible had long been the focus of attention. One of the first scholarly endeavours of Early Christianity was to produce a study edition of the Old Testament in its original Hebrew with all its available Greek translations. This ground-breaking project, carried out by Origen of Alexandria (c. 185–c. 254) in the 3rd century CE, set the foundations for all subsequent projects. It contained the Hebrew text, its Greek transcription and its four different Greek translations in six parallel columns, and hence was named Hexapla, the 'Sixfold', ultimate edition of the Old Testament.

Although Origen’s ground-breaking edition of the Old Testament has not been preserved, his legacy of producing a multilingual study-edition in parallel columns remained in use for a long time. Instead of the complete Old Testament, however, it was rather the Psalter (Book of Psalms) that was used as an instrument to study the biblical text and its various versions. There are several bilingual (Greek–Coptic/Syriac/Latin; Hebrew–Latin), trilingual (Greek–Syriac–Arabic; Greek–Latin–Arabic) or even quadrilingual (Hebrew–Greek–Syriac–Arabic) psalters preserved that show the long-standing success of these study-bibles in the Middle Ages. 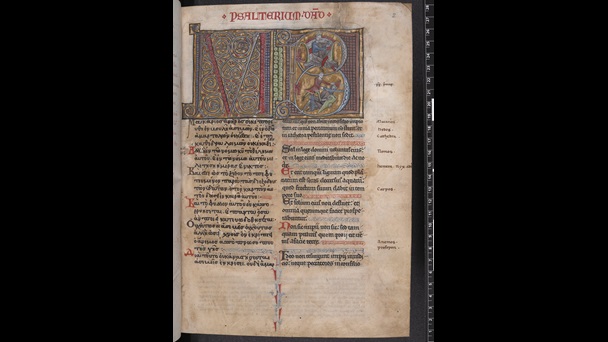 A bilingual Psalter from 13th-century France is a fine example of this thousand-year long tradition of study-bibles. It shows the usual display of the Greek and Latin version of the psalms in two adjacent columns. In order to facilitate the reader’s orientation in the two columns, beginnings of psalm-verses are always meticulously marked in colour. By adding interlinear decoration between the verses, the scribe managed to ensure that corresponding passages would always stand right next to each other.

In addition to this characteristic layout, however, the study-function of the volume is made even more apparent by the marginal notes of its later users. The manuscript is heavily annotated by the Paduan scholar, Pietro da Montagna (d. 1478), whose comments regard not only the content, but also the grammar of the Greek psalms, reflecting his personal efforts to decipher and understand Greek.

Beside their obvious functions as practical documents, study-aids or grammatical textbooks, bi- or trilingual manuscripts of biblical, legal or even theological content may often express an additional, polemical or propagandistic agenda. 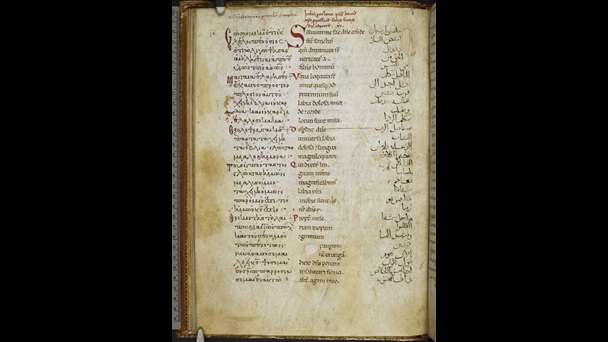 A mid-12th century trilingual Greek, Latin and Arabic Psalter from Sicily illustrates an intricate propagandistic message. The manuscript contains the trilingual text in the ancient layout of three separate columns, but its function was probably much more than fulfilling the practical needs of a multilingual liturgical environment or serving as a textbook of an eccentric scholar. It was designed as a tool in the political propaganda of the Norman dynasty, ruling an essentially trilingual Sicily in the 12th century. Its threefold layout with one and the same text in Greek, Latin and Arabic testifies to a society in which multiple language groups had come together under a new Norman rule.

Bull of Union of the Greek and Latin Churches 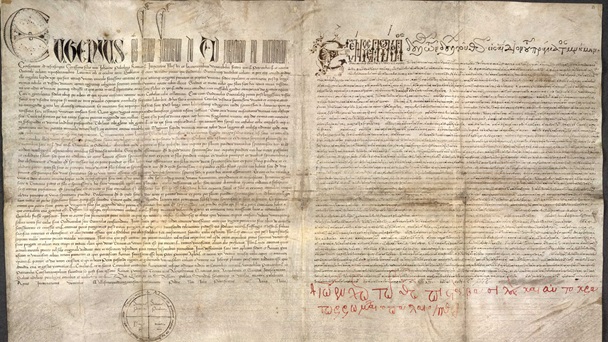 Bull of Union between the Eastern and Western Churches, issued at the Council of Florence-Ferrara in 1439 (Cotton MS Cleopatra E III, ff. 80–81)

The propagandistic message is even more explicit in the case of the bilingual Bull issued at the Council of Florence-Ferrara on 6 July 1439, to announce the newly-achieved union of the Eastern (Greek) and the Western (Catholic) churches after the schism of 1054.

Negotiated by the papal court with a Byzantine Empire strongly under pressure from the Ottomans in the East, this union was viewed as a triumph of papal diplomacy in the West but as a shameful pact by the Byzantines.

The layout of the document with its parallel text in Latin and Greek proclaims unity and peace in the spirit of the text itself, as ‘the wall that divided the Western and the Eastern church has now been removed, peace and harmony have returned’. However, the priority of the Latin in the document with the pope’s name (‘Eugenius the servant of God’s servants’) at the very beginning and the Byzantine Emperor’s signature at the very end of the second Greek column makes it clear that this ‘peace and harmony’ was envisaged as the universal supremacy of Rome.