Scribes and scholars in Byzantium

Byzantine manuscripts were created by and for educated men both in Constantinople and further afield. Georgi Parpulov explores the lives and works of some of these figures.

In Antiquity and the Middle Ages, educated men would sometimes retain duplicates of the letters they sent out, later collecting them in a volume for the enjoyment and edification of posterity. The British Library holds the only surviving copy of one collection of this kind, possibly made (judging from the style of handwriting) during the author's lifetime.

Letters of the Anonymous Professor 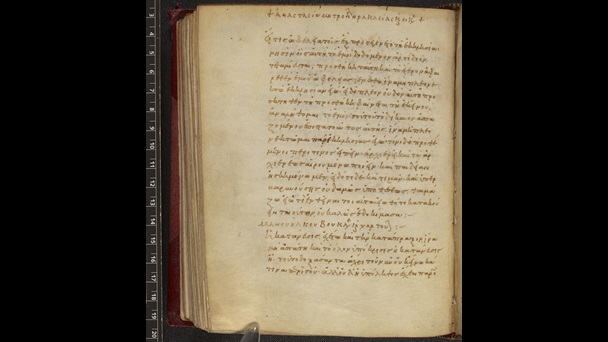 This 10th-century manuscript contains poems and letters by several authors, most notably the Anonymi Professoris Epistulae (‘Letters of an unknown professor’) (Add MS 36749)

Although the name of the writer is not known, the contents of his correspondence show that he was active in the second quarter of the 10th century and lived in Constantinople, where he ran a sort of private secondary school. His students were taught the grammar of classical Greek, a literary language based on the educated speech of the 5th and 4th centuries BCE and markedly different from the Greek spoken in 10th-century Byzantium. The school's graduates went on to become clerics or state dignitaries.

Their teacher did not think himself well-off: he complains of the smallness of his house, resents competition from other schoolmasters, insistently reminds students to pay him due fees, and begs the patriarch of Constantinople for a subsidy. Nonetheless, his correspondents belonged to the highest social circles: bishops, palace officials, even a princess. She and several other people would lend books to the anonymous schoolteacher, including plays by Sophocles (c. 496–406 BCE) (Letter 86). On occasion the teacher would himself copy a volume (evidently making in this way some extra money), even though he claims his handwriting to be 'uneven, slanting, and not prettily arranged, as well as smallish and dull' (Letter 53).

The anonymous letters are copied in the London codex by two different hands (neither of which is likely to belong to the author), and although the scribes obviously worked side by side, their handwritings are easy to distinguish from one another. This is not unusual for Byzantine manuscripts: compare, say, the collection of legal texts in Arundel 516, on which three people collaborated.

Individual handwritings may be recognised: for instance, the two hands seen in Harley MS 5694 (below) both resurface in another manuscript now in Paris. 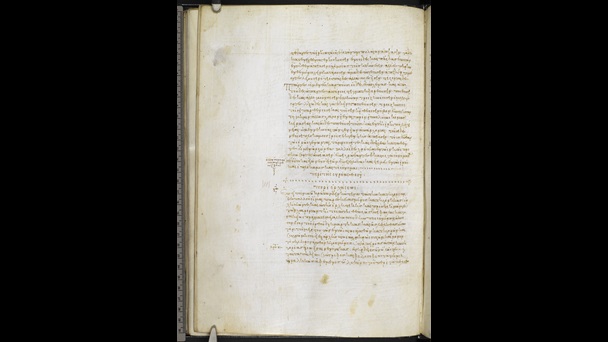 This early 10th-century volume is the earliest extant manuscript containing the works of 2nd-century author Lucian. It was copied by the notary Baanes and annotated extensively by Arethas, Archbishop of Caesarea (Harley MS 5694)

While the London manuscript is unsigned and undated, the Paris one ends with a note on f. 401v stating that it was 'copied by the hand of the notary Baanes for Arethas, archbishop of Caesarea in Cappadocia, in the year 6422 from the Creation of the World' (either 913 or 914 CE), at a cost of 26 gold pieces – a very large amount of money by that time's standards. This note is in the same handwriting as the comments in the two manuscripts' margins. All of these must have been written by the commissioner, Arethas, while the main text in both volumes was penned by Baanes, a professional clerk.

The volume in Paris is a collection of Christian writings, while the one in London contains Greek works by Lucian of Samosata (c. 120–180 CE), a pagan author. Arethas annotated both. As a Christian and a clergyman, he could find himself in disagreement with Lucian's views: 'may you be burnt by fire and wail, buffoon', reads his comment at the end of The Syrian Goddess (f. 60v), where Lucian says he had performed a certain idolatrous rite.

Nevertheless, the archbishop felt no need to delete passages that he found objectionable, and most of his glosses are purely explanatory: it is clear that the ancient text was valued for its literary merits. This enlightened attitude – and the continuing study of classical Greek in Byzantium – allowed for the preservation of a good deal of pre-Christian Greek literature, which has reached us exclusively through handwritten copies made in the 9th or subsequent centuries.

Even in the very last decades before the Ottoman conquest of Constantinople (1453), we find a monk at one of that city's main monasteries producing a manuscript of The Histories by Polybius (c. 200–118 BCE).

Still, Byzantium was a thoroughly Christian society, and the vast majority of Byzantine books contain Christian texts. In terms of numbers, the four Gospels take pride of place among them, followed at some distance by the Acts and Epistles of the apostles. A Gospel, now in London, specially adapted for public reading in church (the text is written entirely in capital letters), was started on Easter Monday and finished in a mere 34 days, according to an anonymous scribal note in the corner of its last page. 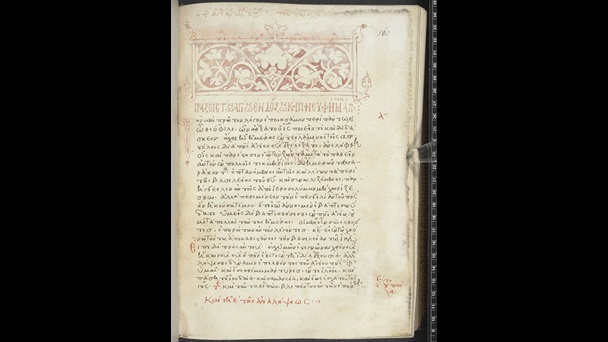 One recognises in yet another copy of the New Testament (above) the characteristic handwriting of George Galesiotes, who is known (from further manuscripts) to have worked as a clerk at the Patriarchate of Constantinople in the early 14th century. Specialists have also spotted his hand in a non-biblical volume (below): it is remarkable how an individual's pen-work becomes much neater when he copies a sacred, scriptural text.

Ascetical works by Matthew of Ephesos 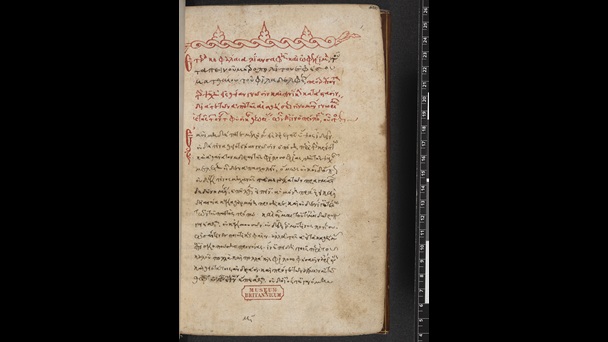 Three volumes of religious texts owned and partly copied by Matthew, metropolitan bishop of Ephesus from 1329 to 1351 (Burney MS 112–114)

In this same manuscript, we find side by side with Galesiotes' handwriting that of his contemporary Matthew, metropolitan bishop of Ephesus from 1329–51. Ephesus had been conquered by the Turks in 1304, which obliged Matthew to spend most of his time in the safety of Constantinople. The identification of his hand in our volume attests personal contact between him and Galesiotes. Even more importantly, it shows that works authored 'by the humble metropolitan of Ephesus Matthew' were written here by this humble author's own hand, which makes the manuscript an entirely reliable witness to their original text. (By contrast, a text repeatedly copied and re-copied is bound to get distorted through inadvertent scribal errors.)

The manuscript opens with a work of Christian spiritual guidance, 'urging the soul toward knowledge of the divine' (as its title says). Its author, however, included the letters of a pagan philosopher, Apollonius of Tyana (c. 15–100 CE) in the very same volume, demonstrating that devout clergymen did not shun pagan literature.

Another Byzantine cleric, John Chortasmenos (d. 1431), composed a commentary upon Aristotle's (384–322 BCE) treatises on logic. That commentary is copied in Harley MS 5697 by the hand of Bessarion (c. 1400–1472), a former student of Chortasmenos. On the eve of the Ottoman conquest of Constantinople (1453), Bessarion settled in Italy, became a cardinal, and on two occasions (1455, 1471) was nearly elected pope. As a scholar and a translator from Greek into Latin, he contributed to the Renaissance rediscovery of classical Greek and Roman culture.

While Bessarion's life is well-documented, most Byzantine scribes remain known to us only through the books they produced. 'Readers, pray to the Lord for George, the sinful monk who copied [this]', asks a brief note on the last page of one. Others did not even wish to record their names, using instead phrases such as 'Glory to God who grants completion to all things. Amen'. Curiously, painted images that precede the individual Gospels in some manuscripts often show the respective evangelist not composing his text but copying it from an exemplar, as scribes would have done. On the writing desk before him lie an inkwell and knives (for trimming the parchment leaves and sharpening his reed pen). He bends over the blank pages that he holds on his knee, ready to fill them with the word of God.