A Christian calendar in the Northern French Hebrew Miscellany

The Northern French Hebrew Miscellany (Add MS 11639), dated around 1278 CE, is one of the richest treasures in the British Library. Professor Sacha Stern examines the inclusion of an unusual Christian calendar in this unique manuscript.
The Jewish character of the Northern French Hebrew Miscellany is unmistakable, with texts of the Hebrew Bible, Jewish liturgy and poetry, and detailed accounts of the Jewish calendar. But it also includes, rather remarkably, a Christian calendar, with a list of Christian Saint Days, in Hebrew (f. 542v). 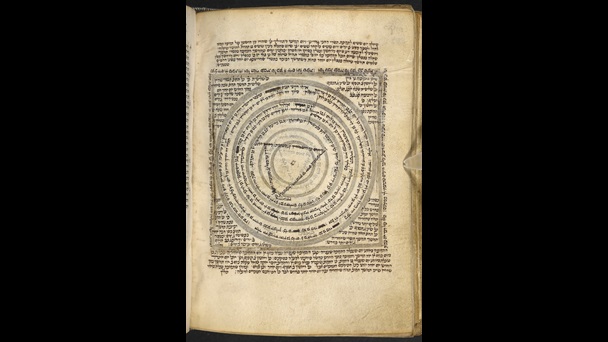 Christian calendars in Hebrew are not unique. They are found in a few medieval Hebrew manuscripts from 14th-16th-century CE Germany, France and Provence, but the Northern French Hebrew Miscellany is the earliest that is known. Its design is highly unusual as it is laid out in the centre of the page in the intriguing shape of a spiral. The calendar provides a selection of Christian Saint days for every month of the Julian year.[1] The months are given their French name (in Hebrew writing) as well as a Hebrew equivalent. For example, January is identified with the Hebrew month Shevat. We are told it has 31 days, before its Saint days are listed. However, the Jewish authorship of this Christian calendar is never lost on the reader. The names of Saints are often negatively distorted and the title of Saint (in Hebrew qadosh, meaning holy) is hardly ever used, no doubt a deliberate omission.

Critical language exists throughout this calendar. It begins with the title: ‘The months of the non-Jews and their abominations’. The first Saint Day that is listed for January, St Simeon (of the Stylites), is rendered not as Shimon (the Hebrew equivalent name) but as Ṣimaon, which in Hebrew means ‘thirst’. The days of St Mary appear at several points in the year. For example, the Purification of Mary on 2 February, under the name of ḥariah, a distortion of Mariah, which sounds like the Hebrew for excrement. The days of St Peter, for example St Peter’s Chair on 22 February and St Peter and Paul on 29 June, are regularly given as Peṭer ḥamor. The latter means donkey, which is not merely intended as an insult, but as a clever pun on the Biblical Hebrew phrase for first born ass (Exodus 13:13). St John the Baptist, whose birthday is on 24 June, is depicted as Yaḥoram, ‘may he be destroyed’, from Exodus 22:19. It is a distortion of the Hebrew name Yoḥanan, the Hebrew equivalent of John.
All these derogatory names and words have been blackened out in the manuscript, presumably by one of its later Christian owners. But they are still legible behind the ink. The distortion of the names of Christian Saints and feasts was common practice among medieval Jews, and the scribe of this manuscript was most probably following common usage. This usage undoubtedly reveals deep-seated anti-Christian feelings. But its intention was to neutralise the religious significance of Saint Days and feasts, and to avoid the use of what medieval Jews considered to be idolatrous names, whose utterance is forbidden in Exodus 23:13. The layout of this spiral design is clearly well thought out, with the text beginning at the top of the circle, progressing anti-clockwise and inwards. It ends after three full circles, with the day of St Sylvester (31 December), just below the point at which it started. The spiral bears no relationship to the contents of the text. The calendar could have been written in a straight, linear form, which would have made it much easier to read. So what is the meaning of this spiral? Was it to suggest something dark and magical about Christianity, as spirals are sometimes interpreted in medieval Hebrew magical manuscripts?
No less strange is the triangular text which follows the day of St Sylvester right inside the spiral. This text presents the four-part division of the ecclesiastical year, which was used in medieval society for the payment of rents and taxes. The divisions are:

Laying the four parts into three segments on a triangle and the strange spiral can only be explained by turning the page (f. 542r). There we find a cosmological diagram of the zodiac and the planets, with three concentric circles, and one triangle in the centre. The ink is so dense, that it has penetrated to the other side of the parchment where our Christian calendar is written, and where the circles and triangle are clearly visible. Ink penetration made this side of the folio a ‘bad page’. However the scribe was still able to make use of it by marking his calendar in the shape of a spiral, laid out on the three concentric circles, and a triangle. The outcome was neat, even if the triangles on each side did not quite match. But in terms of the contents – a calendar of the Christian year – the spiral and triangular layout made little sense and was very awkward to read. The scribe’s decision to use a ‘bad page’ for a Christian calendar can perhaps be viewed as a reflection of his anti-Christian feelings. 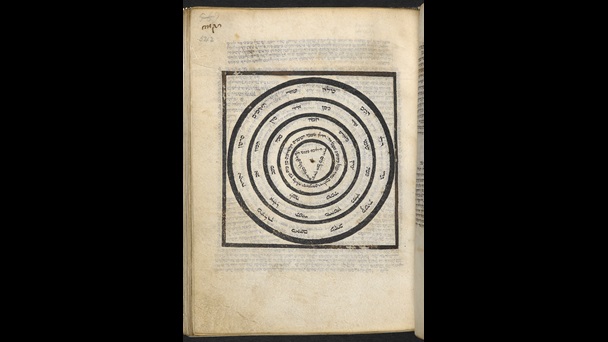 Divisions between Judaism and Christianity were not the scribe’s main reason for writing a Hebrew version of the Christian liturgical year. The inclusion of a Christian calendar in the Northern French Hebrew Miscellany was driven by the practical need for Jews to navigate their way through a predominantly Christian society. For example, Jewish traders needed to know the Saint Days and Christian feasts when markets were frequently held; and bankers needed to understand the dates in legal documents which were normally given with reference to key events in the Christian liturgical year. Knowledge of the Christian calendar was essential for Jews to co-ordinate their business and activities with the rhythms and structure of Christian medieval life. The inclusion of a Christian calendar in the Hebrew Miscellany, alongside detailed accounts of the Jewish calendar (some of which appear on this same page), suggests that the Christian calendar had become an inherent part of medieval Jewish time reckoning.

More articles on Science and medicine