As part of the Hebrew Manuscript Digitisation Project, the British Library imaged 74 scrolls. Former project conservator Ann Tomalak describes some of the challenges of conserving these unique items.
The British Library’s Hebraic scrolls range in size from one smaller than a little finger to another a whopping 52.41 m long – three times the length of the conservation studio; the tallest is nearly a metre with its rollers. Following a survey in 2014, it became apparent that some of the scrolls were very damaged, and a two-month assessment phase began. This was not a simple task. Many of the larger scrolls are very heavy and require two conservators to make sure they were handled safely – using lots of weights to prevent scrolls from rolling off work surfaces. The parchment scrolls have been tightly rolled for a very long time so looking at them has been a challenge, as they try hard to re-roll themselves unless held down securely. Text was rewritten after surface delamination; plus insect damage and excreta (Or 4224)

As well as some fine examples of large Torah scrolls[1] on parchment, made for synagogue use, we also have some written on leather. The most important of this group is the Kaifeng Torah, which was made in central China in the 17th century CE. Read more about it here: http://www.bl.uk/onlinegallery/sacredtexts/kaifengtorah.html.
There are also much smaller scrolls made for personal or family use. In particular, we have quite a few scrolls of the biblical Book of Esther. Esther scrolls used in the synagogue ritual are unadorned, but scrolls used for private use and family celebrations may have decorative margins or full-colour miniatures. The survey showed that up to half of the scrolls needed some kind of conservation treatment. The majority were quick tasks carried out during assessment (edge tears or broken sewing joining panels) to avoid having to roll and re-roll the scroll later. However, a dozen of the scrolls needed extensive repair simply to get them through the digitisation processes safely, so were sent to the Library’s Conservation Studio. 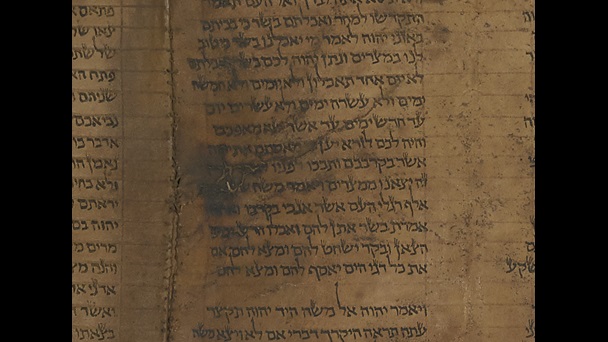 Sewing is too tight and the holes too close together. The leather surface is also crazed and inflexible in part (Or 1462)

Many of the scrolls have integral rollers. It was agreed not to repair these if they were broken, because we never lift scrolls by the roller handles anyway, since so many are now delicate. Even more fragile are the few scrolls that roll back into cases as the mechanisms now tend to stick. Once digitised, these will be handled rarely.
The scrolls are made of rectangular panels of parchment or leather (often called membranes) joined end to end. We were surprised to find that the majority were linked only by long, crude running stitches of linen thread, but these joins had mostly remained intact. A better understanding emerged when we found a pair of scrolls with joins of fine oversewing (possibly done by a seamstress, not a leather worker), where the thread had torn through the leather; the frequent holes essentially acting as a perforation strip. Evidence of use is carefully preserved; here molten wax has dripped onto the scroll (Or 1463)

A few of the scrolls have protective silk panels stitched to the verso[2] at the outer end and we also found four mantles.[3] Our textile conservator cleaned and repaired these to make them safe to handle and image. They will be boxed separately and made available for display in the future. As part of the project, many of the scrolls will also be re-housed in custom-made boxes.
Conservators were involved early in the process of selecting suitable equipment. Although no Hebraic manuscript books have been scanned, we concluded that it would be safer and more efficient to scan some of the scrolls – though using the equipment unconventionally, without the glass sheet to flatten them. Although our imaging technicians are used to digitising oriental scrolls, as well as other rolled materials such as maps, we think this is the first time anyone has digitised such a large group of Hebraic scrolls. Marginal decoration of an Esther scroll (Or 1047) 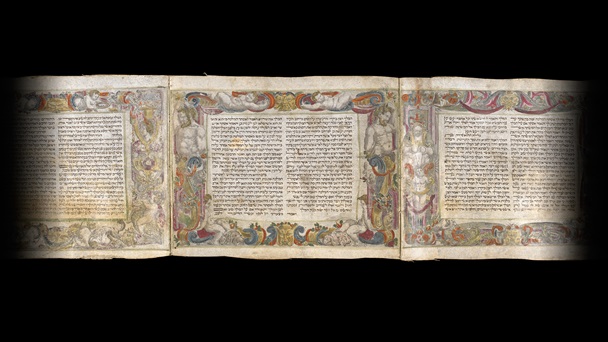 Image printed on parchment and hand coloured. The printing block was probably generic, used to decorate many different texts, but is unusual for a Hebraic manuscript (Or 13028)

[1] A Torah scroll is the holiest book within Judaism, made up of the five books of Moses
[2] A left-hand page of an open book or the back of a loose document
[3] A covering of a specified sort