Palaeography: scribes and the transmission of Hebrew scientific works

Before the age of printing, the texts and layouts of Hebrew works were not standardised. This is because the transmission of works was out of the hands of their authors and in the hands of scribes. Dr Israel Sandman considers the intervention of scribes when copying Hebrew scientific works.
When transmitting Hebrew works, scribes were at times prone to errors. Sometimes the eye skipped, or a scribe wrote what they expected rather than saw. Scribes sometimes had difficulties deciphering Hebrew script of a different region. More significantly, scribes deliberately intervened in the text because they saw themselves as editors. Since each copy was individually hand-written, every single copy was subject to these changes. Furthermore, there was no overseeing body to implement standardisation and except for the case of Bibles, there were no rules standardising spelling, layout, letter formation, writing material, or ink colour.

Despite this potential for variation, we find much uniformity, achieved in part by conscious effort. Only occasionally do we find a version that is radically customised and varied from the norm. Less rarely, we find that a work exists in two or three basic versions, which do not vary greatly, and each of which is attested by multiple witnesses. Sometimes the authors revised their works putting forward multiple versions. However, on the whole scribes and subsequent users left the main text mostly intact. Editorial tasks were often performed in marginal glosses,[1] recording variant versions, dissenting views, explanations, and translations of technical terms.

The examples here are of the transmission of Sephardic (Jewish Iberian) scientific works by known medieval authors. However, the points made hold true for many other genres. Illustrating the use of glosses, we turn to the publication in Italy of Tsurat ha-Aretṣ (Form of the Earth, Structure of the Celestial Orbs, and Order of the Motion of the Stars), authored by the Spanish rabbi, mathematician, and astronomer Abraham bar (son of Ḥayya or Ḥiyya), active in the early 12th century CE. This work survives in over 80 manuscript copies, not only in the Sephardic style of Hebrew handwriting, but also in Byzantine, Italian, African, and Ashkenazic (Jewish Franco-German) Hebrew styles, indicating the work’s wide transmission. Manuscript Or 4597 contains a copy of the work in an Italian-Hebrew hand from the 14th or 15th century CE. The scribe contradicts bar Ḥayya’s statement and accompanying diagram at the beginning of chapter five. Rather than omitting that passage and diagram, the scribe leaves them in. But, he does not let them pass without comment, noting the problem in the margin of f. 23r. 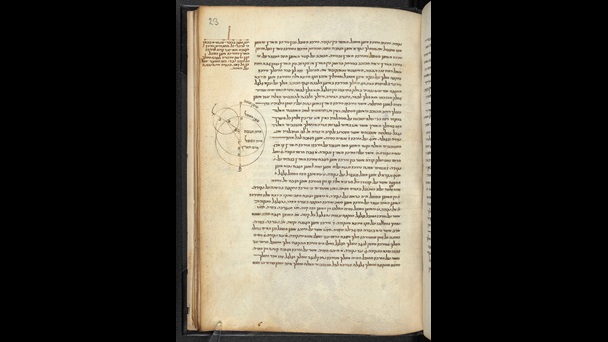 In an earlier passage, on f. 3r, fixed stars are discussed. The main text dubs these as seated / settled (ha-meyushavim / המיושבים) stars. An interlineal gloss[2] suggests standing / lasting / constant (ha-kayamim / הקיימים). And in the margin, in a different Hebrew hand, we find the Italian term with the explanation ‘In the foreign language (viz. Italian) this means סטילי פֿיסי stelle fisse / the fixed stars, explaining that they do not draw apart from one another from time to time and the distance between them is forever constant.’ 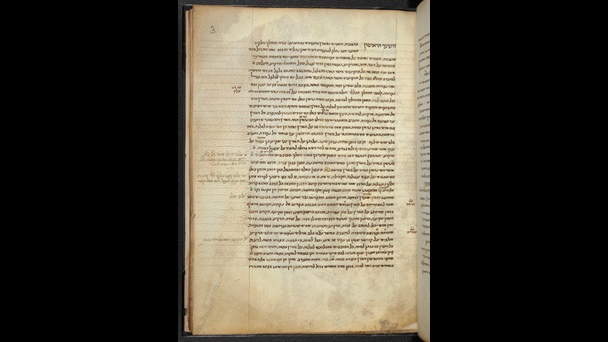 Sometimes, several manuscript copies contain little variance and many unique features. Clearly, these derive from a single ancestral line and as such they are called a family. Often, manuscript families are unified by region so we can speak of an Italian, Byzantine, or Ashkenazic family of a particular work. The region of a family is indicated not only by the style of Hebrew script but also by localised versions of vernacular words. Occasionally, the location of scribing is explicitly mentioned in the colophon.[3]

Consider the Italian publication of bar Ḥayya’s calendrical work, composed in France in 1123 CE. The work is untitled, but it is often listed in catalogues under the title Sefer ha-‘Ibur, which simply means Book on the Calendar. This work combines Jewish learning with Greco-Arabic science, treating astronomy and the lunar and solar aspects of the Jewish calendar. The work survives in over 20 manuscripts. These include around 10 unaffiliated manuscripts plus three families: a Byzantine family of two manuscripts; an Ashkenazic family of two manuscripts; and an Italian family of seven manuscripts. The latter is based not directly on the author’s text, but on a subsequent version established in Italy. This is clear from the Italian version of solar month names (Hebrew transliterations of febbraio, marzo, aprile), the Italian-Hebrew convention of attaching the prefix shel (של = ‘of’) to the subsequent word, spelling conventions, and more. One of the manuscripts of the Italian family, Add MS 26899, contains a colophon, showing the place of origin as the Italian city of Osimo. Also in the colophon is the scribe’s name, Moses. Earlier in the work the scribe hinted this, by highlighting the first letters of consecutive lines that spell his name. 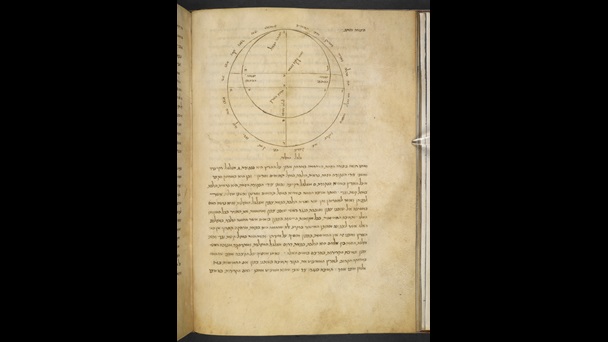 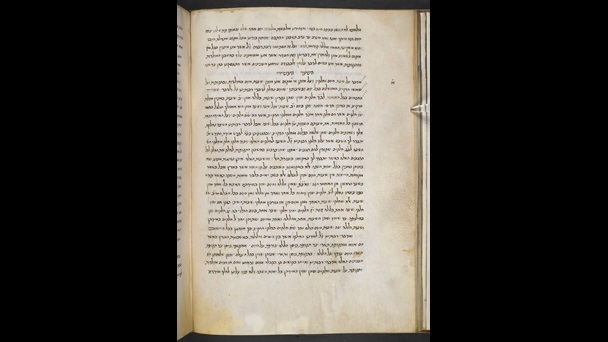 At the end of the work there are formulas, with accompanying tables, for converting dates between the Jewish calendar and other calendars. One of these tables lists which day of the week each solar month begins, over the great cycle of 28 years. In the Italian family, the faithfulness to the received version is so strong that a mock error, with its accompanying apology, is knowingly included in the table. ‘The embolism in this table in the month of February in accordance with the view of the people of France was mistakenly written at the month of December’. The error was only corrected in a later generation of the family. The error in Add MS 26899 was not made unintentionally. Examination of the text shows that the scribe consulted at least two examples, leaving a visual hint of this. In several parts of the work, he inserted small marginal markings parallel to small markings within the text. These indicate page changes in one of his examples. Markings in the margin, consisting of two to four dots or horizontal strokes, calling attention to similar markings in the text, above the first letter of the word where the page changes in the scribe’s exemplar (Add MS 26899, f. 57r)

Scribal editing occurred in the place of composition as well as abroad. In Toledo, Spain, in the year 1310 CE, Isaac son of Joseph Israeli, another Spanish rabbi, mathematician, and astronomer, released Yesod Olam (Foundation of the World), presenting all the mathematics necessary to understand the Jewish calendar, followed by treatment of the Jewish calendar. Soon after its release, the work branched into three versions. Manuscript Add MS 15977 is Sephardi, written in the 15th century CE. This version appears to synthesise the other three versions and improve the diagrams and seems to have been given great consideration. For example, in most manuscripts of this work, diagrams are drawn to look symmetrical. This is done even if symmetry runs contrary to the explicit description in the text, or if it limits the applicability of the diagram. In Add MS 15977, however, proper asymmetry is restored. This is done in Book 1, Chapter 2, Lesson 28, where the top right square is smaller than the top left square, and in Lesson 30, where the spacings on the right are wider than those on the left (see figure below).

"The Foundation of the World" 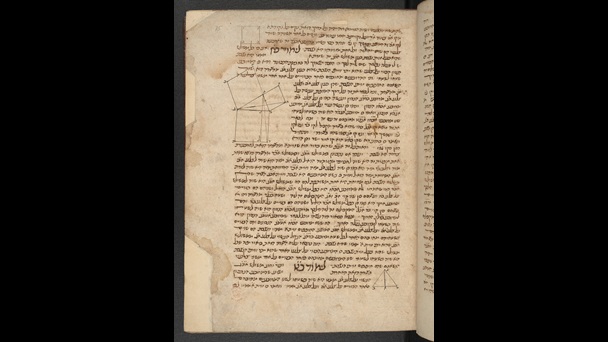 Entering the world of medieval Hebrew manuscripts exposes us to many challenges. On the basis of what has survived, can we reconstruct the work that left the quill of the author? And can we enter deeply enough into the flow of Jewish culture to appreciate the changes that happened along the way?

[1] A gloss is a brief marginal notation of the meaning of a word or wording in a text
[2] A series of brief explanations (such as definitions or pronunciations) placed between a line of original text
[3] A publisher's emblem or imprint, usually on the title page of a book

More articles on Science and medicine