Most readers of the Bible feel that they sometimes need an explanation – a gloss – to understand a text written and edited many centuries before it reached their hands. Dr Javier del Barco looks particularly into the practice of producing glossed Hebrew Bibles in medieval Ashkenaz.

The first of the biblical translations – the Targum or Aramaic paraphrase – is nothing less than a commented or glossed translation of the Hebrew text. So when theTargum was incorporated into Jewish liturgy,[1] Jews soon felt the need to produce Bibles that included the Aramaic gloss together with the Hebrew text. These Bibles usually present the Aramaic translation following each verse of the Hebrew text, both sharing the same mode of script – usually calligraphic square – and letter size. This makes it almost impossible to distinguish between the Hebrew and Aramaic at first glance.

At least as far back as the beginning of the 13th century CE, more up-to-date commentaries began to be copied together with the biblical text. The commentary composed by Solomon ben Isaac of Troyes (1040–1105 CE), better known as Rashi, became the standard commentary in northern France and then in the rest of Ashkenaz – encompassing Germany, central Europe, and northern Italy. Reading the Targum was still a liturgical obligation in Ashkenazi communities, but reading Rashi’s commentary was far more convenient for ordinary Jews who wanted understand the Hebrew text in the context of their own cultural settings.

Thus, Bibles were produced containing the Hebrew text, the Targum (at least Onkelos, the standard Aramaic paraphrase of the Pentateuch), and Rashi’s commentary that adopted new strategies to accommodate all these texts. The resulting format was more suitable for the way the Bible was read – by going back and forth between the Hebrew text and its accompanying texts. These strategies focused on establishing textual hierarchies and included: different, separate spaces; different letter sizes; and different script modes for each text.

Therefore it was in Ashkenaz where Bibles containing the Targum and Rashi’s commentary became a model of the glossed Hebrew Bible until the 15th century CE. Surviving copies of the Ashkenazi glossed Bible date from as early as the 13th century CE – for example, Add MS 26879, a Bible of possible French origin containing the Prophets. The beginning of Kings (f. 108r) shows how the texts are arranged in three separate columns, using different letter sizes and script modes. The Masorah[2] is copied, as is customary in Masoretic Bibles, in the upper and lower margins, but here it is aligned exclusively with the column containing the Hebrew text.

The Former and Latter Prophets 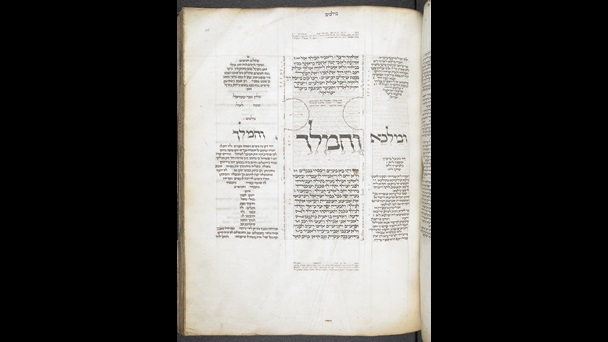 Beginning of the book of Kings in a 13th-century Ashkenazi glossed Bible, with parallel columns containing the Targum and Rashi’s commentary in geometrical shape (Add MS 26879, f. 108r)

Other examples from the 14th century CE show the standardisation of the model of the Ashkenazi glossed Bible and its main characteristics (Harley MS 5709, f. 1r; Harley MS 1861, f. 57v; Add MS 26878, f. 209r). All of these present a page layout with three columns – one for the Hebrew text, one for the Targum, and one for Rashi’s commentary. The central column is reserved for the main text in Hebrew, while the inner columns contain the Targum, and the outer columns Rashi’s commentary.

Upper and lower margins are filled depending on a use-on-demand basis, which means they may be used if the amount of text to be written on one particular page is long enough to require the space in those margins. This happens quite often with the text of Rashi’s commentary, especially in sections where the commentary referring to the Hebrew text on a particular page is lengthy (see, for example, Harley MS 5709, f. 1r, with the beginning of Genesis, and Add MS 26878, f. 209r, with the beginning of Deuteronomy).

The Hebrew text in the centre is copied using a calligraphic square script of Ashkenazi type. The same mode – calligraphic square – is used for the Targum, but the letter size is smaller, which clearly differentiates the main Hebrew text from the secondary Aramaic gloss. Rashi’s commentary is third in the hierarchy of texts. This is indicated by its place on the page – occupying the outer margins – and its script mode and letter size – a semi-cursive script of small size. 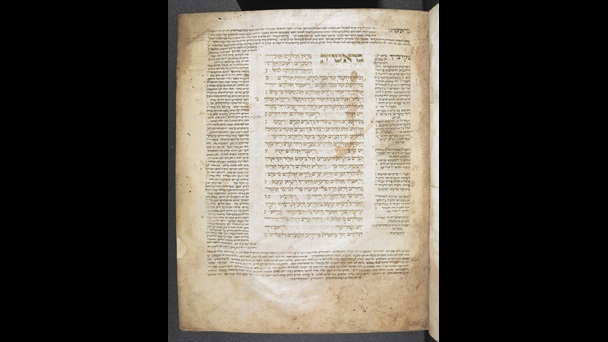 Beginning of Genesis, with the Targum in the right column and Rashi’s commentary in the left column, and upper and lower margins (Harley MS 5709, f. 1r) 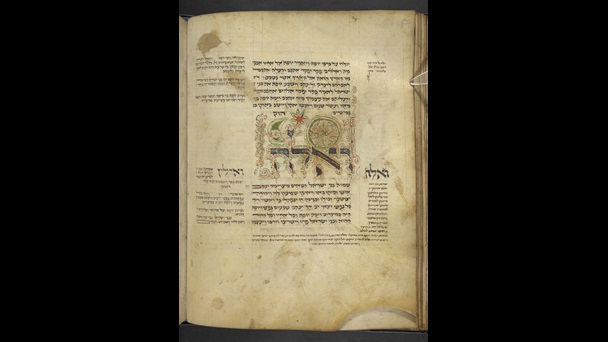 Beginning of Exodus with a large panel containing the initial word of the book. This causes large blank spaces in the right and left columns parallel to the area where the panel has been decorated (Harley MS 1861, f.57v) 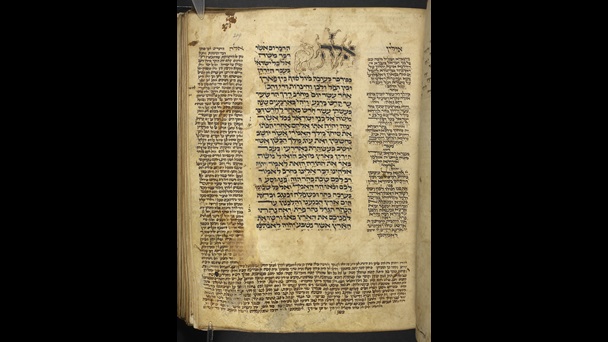 Beginning of Deuteronomy with the Hebrew text, the Targum, and Rashi clearly differentiated and hierarchised (Add MS 26878, f. 209r)

Sections of the Bible other than the Pentateuch do not always present the layout described above. These include the Hagiographa or Ketuvim in complete Bibles – containing the twenty-four books of the Hebrew Bible, the haftarot,[3] and five megillot[4] in liturgical Bibles. These sections do not always include the Targum. As a result, they have a large central column containing the Hebrew text and a smaller, marginal outer column with Rashi’s commentary.

When specific haftarot are presented with the Targum – as it is the Ashkenazi custom to do with the haftarot for Passover and Shavuot – the scribe makes room for a third column in the specific place where this is needed. Thus, in Harley MS 5709, f. 285v, which contains a section of the haftarot, the upper half of the page is arranged in two columns corresponding to the Hebrew text and Rashi’s commentary. And the lower half of the page, which contains the beginning of the haftarah for the first day of Passover, is arranged in three columns. The corresponding section from the Targum is included here. 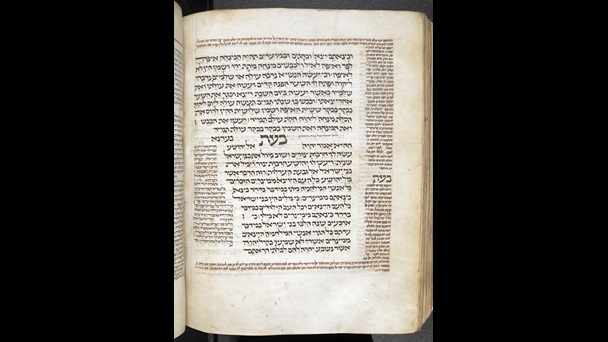 Haftarah for the first day of Passover. The scribe has made room to include a third, inner column with the Targum (Harley MS 5709, f. 285v)

In the 15th century CE, other commentaries and texts relating to different traditions merged with the Ashkenazi glossed Bible, especially in Italy. There, migrant Jews from both Ashkenazi and Sephardi regions had arrived, bringing with them their textual and liturgical customs. Thus, new models of the glossed Bible emerged that included commentaries other than Rashi’s.

Harley MS 5772, a Pentateuch produced in the 15th century CE, contains the typical texts of the Ashkenazi glossed Bible – including the Targum and Rashi’s commentary – plus the commentary composed by Abraham ibn Ezra (1089–1164 CE), one of the most authoritative interpreters, or commentators of the Bible, among Sephardi Jews.

As you can see in f. 1r of this manuscript, the page layout for the Hebrew text, the Targum, and Rashi’s commentary, is identical to that of the Ashkenazi glossed Bible. To accommodate Ibn Ezra’s commentary, the scribe has simply added a fourth, narrow column in the outer margin, in addition to using the upper and lower margins to complete the text needed for this particular section.

Pentateuch with the commentary of Rashi 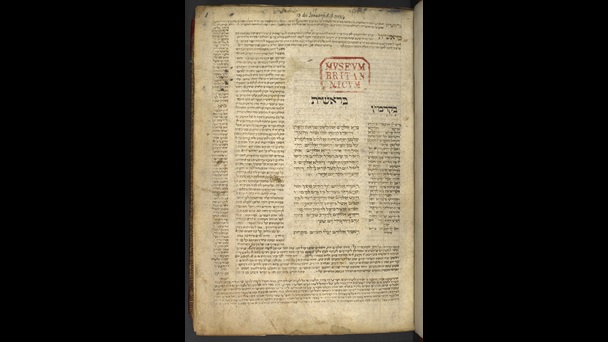 Beginning of Genesis containing, in addition to the typical texts of the Ashkenazi glossed Bible, the commentary by Abraham ibn Ezra copied in the outer margins of the page (Harley MS 5772, f. 1r)

Bibles produced in the 15th century CE both in Italy and in the Iberian Peninsula show different choices and selections of texts. The result is sophisticated and even artistic page layouts in multi-glossed Bibles. The publication of the Biblia Rabbinica – merging different traditions, types of Bibles, and page layouts from biblical and halakhic manuscripts[5] – sanctioned this diversity and ultimately opened a new chapter in the history of glossed Hebrew Bibles.

[1] I refer here to the prayers and readings from the Bible, their order and performance, as publicly instituted in the synagogue service.
[2] Notes concerning the counting of words and their listings, and the indication of scriptural particularities, written in micrographic script, and usually placed in the upper and lower margins and in spaces between columns.
[3] Sections from the books of the Prophets that are read in the synagogue after the weekly section from the Pentateuch.
[4] Books that are or were read from separate scrolls—in Hebrew, megillot—in the synagogue on the occasion of particular festivities. These books are Ruth, Song of Songs, Ecclesiastes, Lamentations, and Esther.
[5] Manuscripts containing works on Jewish religious law, of which the Talmud is the most ancient and the basis for later works and commentaries.